That’s the subject of an article written by former Obama administration official Joshua Geltzer. Back in the heady days of Hopenchange Geltzer spent his time serving on Obama’s National Security Council. You know, the same Obama administration that weaponized the IRS to take down its political enemies, ran guns to Mexican drug cartels, oversaw a massive NSA spying scandal, and colluded with foreign actors and Democrat party officials to spy on the Republican candidate for president in 2016.

Nowadays it seems Joshua Geltzer spends his time scaring the crap out of poor little lefties by implying that President Trump won’t accept the 2020 election results if (re: when) he loses, and that a violent military coup might be necessary to “preserve democracy.”

“What if Trump refuses to accept defeat in 2020?” explores the various ways that the Republic can be saved when the evil Orange Man Bad refuses to abdicate his throne and declares himself God Emperor For Life. Why would President Trump refuse to step down in 2020? Why, because in 2016 President Trump refused to say whether or not he would accept the results of the election if Hillary Clinton won, of course!

The entire premise of Geltzer’s article is laughable, mainly because Hillary Clinton herself has refused to accept the results of the 2016 election. The entire Left, in fact, has spent the last two years raging, punching, and protesting across the country precisely because they refuse to accept the fact that President Trump won fair and square in 2016.

Sane individuals on Twitter were quick to point out exactly how ridiculous Joshua Geltzer-and CNN-were being.

I’m only here for the Trump Derangement Syndrome on full display in these replies.

Your entire network is ridiculous. What you really should be asking is if he wins again will the left start a civil war. It’s the left that’s out of control.

I like to fantasize about unlikely dramatic scenarios too.

Oh for crying out loud we heard the same fear-mongering before Trump was elected. Turns out it’s Democrats who can’t accept the results of the last election. Not to mention Democrats threaten legal action and challenges to elections all the time. Stacy Abrams ring a bell?

Stacey Abrams, you may recall, was the Democrat candidate for governor in Georgia. Rather than accepting her loss to Republican Brian Kemp, Abrams accused him of voter suppression. It took Abrams almost a week to concede with a speech that made it clear she considered herself the rightful ruler of the people of Georgia.

Then a few months later Stacey Abrams flat out called for illegal aliens to be allowed to vote in local elections.

The American Left have hardly handled his entrance peacefully, so you should be asking, how does the Left handle another loss?

Given the way CNN and the Left in general has handled their loss in 2016 I’m sure they’ll react with good natured humor and endeavor to do better next time.

You might want to stock up on ammo just in case, though. 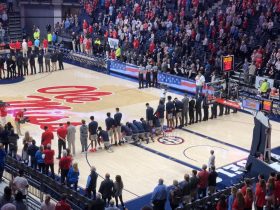