One term in the Minnesota State Legislature, sixty or so days in Congress and this morning Ilhan Omar  (DFL, CD5 – Minnesota) is The Most Powerful Democrat Politician in America.

You know, Nancy Pelosi and The Old Guard Donks must be wondering what hit them.

There hasn’t been a Preference Cascade like this, sweeping away the rotted carcass of a geriatric and doddering enfeebled elite in a political party, since the fall of The Berlin Wall.

Yeah, Sparta Report’s own Radius saw this coming and predicted it a bit back but Jeez Louise and Holy Crackers – I mean this is some Warp Speed Shape Shifting that’s going on.

As for Democrat Party leadership, well there hasn’t been a birth and death this gruesome since the original Alien movie.

The Media wanted to Make Alexandia Ocasio -Cortez the New Face of the Democrats, but for the application of Realpolitik her Green New Deal was a sad flopski.

For raw Political Power it’s Ilhan Omar; she and her cadre of The Committed and The Crazy have just Fundamentally Transformed the Democrats into Something Completely New and did so in such a way as to make a Community Organizer proud.

Meet the New Boss, not the same as the Old Boss by any stretch.

Well, the Old Donks made a Deal with the Diversity Devil and here’s the cards that were dealt:

A Black Refugee Muslim Woman is now holding four Intersectional Aces and there’s no other hand out there in Donkville right now that even come close.

Talk about a Bad Night in Vegas for Nancy. 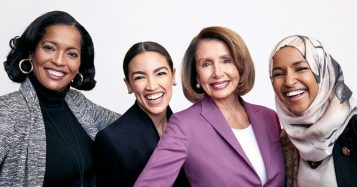