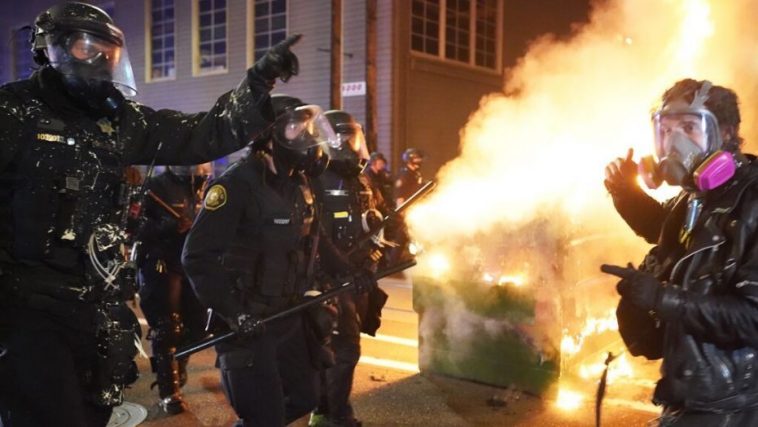 My Administration will do everything in its power to prevent weak mayors and lawless cities from taking Federal dollars while they let anarchists harm people, burn buildings, and ruin lives and businesses. We’re putting them on notice today. @RussVought45

President Trump on Tuesday threatened the federal funding for Seattle, Portland, New York City, and Washington as part of an effort to target “anarchist jurisdictions” that he claims have “permitted violence and the destruction of property” during recent protests.

In a memo to the attorney general and the White House budget director, the president called for a review of all federal funds provided to Seattle, Portland, New York City and Washington, D.C., saying, “it is imperative that the federal government review the use of federal funds by jurisdictions that permit anarchy, violence, and destruction in America’s cities.”

All four cities have experienced varying amounts of violence and destruction of property amid the summer-long protests against police brutality, systemic racism and Trump himself.

“My administration will not allow federal tax dollars to fund cities that allow themselves to deteriorate into lawless zones,” Trump wrote in the memo.

The memo comes as Trump, running for reelection, has accused Democrats of being weak on the issue and has emphasized a law-and-order message. (In a campaign appearance Tuesday, Democratic presidential nominee Joe Biden said, “protesting is a right and free speech is a right, but to engage in violence, burning, looting, and the rest, in the name of protesting, is wrong.”)

“My administration will do everything in its power to prevent weak mayors and lawless cities from taking federal dollars while they let anarchists harm people, burn buildings, and ruin lives and businesses,” the president tweeted Tuesday night. “We’re putting them on notice today.”

The Trump memo calls for the director of the Office of Management and Budget, within 14 days, to issue guidance to the heads of executive departments and agencies to submit a report detailing all federal funds provided to Seattle, Portland, New York City, Washington D.C.

“The federal government provides states and localities with hundreds of billions of dollars every year, which fund a wide array of programs, such as housing, public transportation, job training, and social services,” the memo says. “These funds have been collected from American taxpayers who entrusted their money to the federal government to serve our communities and our citizens.”

The memo also calls for “identifying anarchist jurisdictions” in the United States, calling on the attorney general to publish a list of state and local jurisdictions that have “permitted violence and the destruction of property to persist and have refused to undertake reasonable measures to counteract these criminal activities.”

After such localities are identified, the memo calls for the budget director to issue guidance on how to restrict the eligibility of funding for these “anarchist jurisdictions” in receiving federal grants.

It remains to be seen what impact the effort will have.

“President Trump has actively sought to punish NYC since day one. He let COVID ambush New York. He refuses to provide funds that states and cities MUST receive to recover. He is not a king. He cannot “defund” NYC,” the Democrat wrote on Twitter.

For months now, spineless local officials like Portland’s Mayor Ted Wheeler have done nothing as their cities have been taken over by a bunch of spoiled brats and wannabe anarchists who have never had a board of education applied to their seat of knowledge.

You mix a bunch of programmed Marxist Pee Wee Hermans with anti-social psychopaths and you get the bunch of useful idiots now known as Antifa and BLM.

With no regard for their fellow man, the blessings of having been born an American, or the hard work of others before them which have provided all of the luxuries which these brats have enjoyed in their brief lives, they have set out on a path of destruction which has been passively and actively supported by the Main Stream Media and the Far Left Democratic Party.

Thank God that the overwhelming majority of Americans think that the spoiled brats of Antifa and BLM are a bunch of scumbags, otherwise, our Sovereign Nation would be history.

President Trump is well within his rights as a President to examine how the hard-earned money of American Taxpayers is spent.

Giving enormous amounts of OUR money to bail out feckless inept local Democrat Politicians like Cuomo and de Blasio would be a bad investment and would not be acceptable.

All along, President Trump has offered his help to stop the violence and destruction plaguing these cities and, at very turn, he has been rejected by Democratic Politicians who somehow thought that blaming him for the riots would make him look bad to American Voters and get them off the hook at the same time.

It actually had the opposite effect.

And, the icing on the cake was when he ignored the local politicians in Wisconsin and toured riot-ravaged Wisconsin, with news cameras rolling so that the entire nation could see what Democratic Politicians had allowed to happen to Americans.

So now, Biden, who criticized Trump for touring Kenosha, is going to go there himself, an attempt to “catch up” which will prove to be too little, too late.

The Democrat Leaders of these cities and the states which they are located in, thought that they could have their cake and eat it, too, by turning their back on the American citizens affected by the riots which they did nothing about, while they insulted and criticized Trump, still expecting him to bail them out with federal funds.