It seems impossible for a man of President Trump’s age to be capable of holding three rallies across the country in as many days-and yet, here we are. President Trump is getting ready to host another rally in Fayetteville, North Carolina.

Today’s rally comes one day after the death of Supreme Court Justice Ruth Bader Ginsburg, and one day after Democrats threatened to continue violent riots should the GOP even think about replacing her. No doubt President Trump will have a thing or two to say about that.

Air Force One has just touched down in Fayetteville, and the rally itself is scheduled to begin shortly.

You can watch the rally below via RSBN: 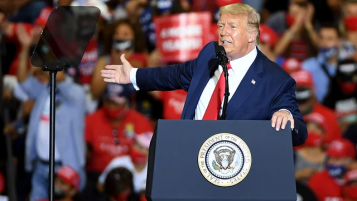