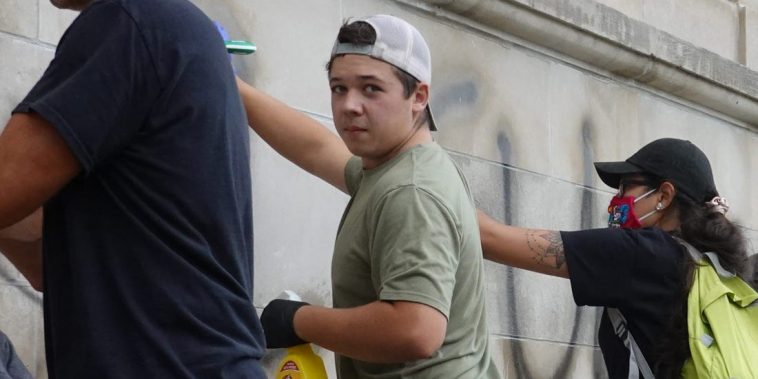 UPDATE: The lawyer representing Kyle Rittenhouse is calling for Republican Maryland Governor Larry Hogan to step down after his office fired a member of his staff for supporting the teenager on social media.

On Friday, an Illinois judge agreed to delay Kyle Rittenhouse’s extradition hearing until next month. This followed a request from the defendant, which stated he needed more time to find a lawyer.

The 17-year-old has been accused of killing two people and injuring another during a recent protest in Wisconsin. He is facing six criminal counts, including first-degree intentional homicide, which could result in a life sentence.

In addition to felony charges, Rittenhouse has been charged with possession of a dangerous weapon while under the age of 18.

Shortly after the incident, a criminal complaint surfaced. It alleged he called a friend, 36-year-old Joseph Rosenbaum, just after the shooting and said, “I just killed somebody.”

The complaint further claimed he went on to shoot and kill 26-year-old Anthony Huber. Huber reportedly chased Rittenhouse down and attacked him with a skateboard following the first shooting.

Rittenhouse then allegedly fired at 26-year-old Gaige Grosskreutz, hitting him in the arm.

Despite these allegations and the charges against him, the 17-year-old maintains he acted in self-defense. According to officials, he will remain in custody in Illinois.

Friday night, Pierce Bainbridge, Rittenhouse’s attorneys released a statement in his defense. Here is an excerpt:

Upon arrival, Kyle and others stood guard at the mechanic’s shop across from the auto dealership to prevent further damage or destruction. Later that night, substantially after the city’s 8:00 p.m. curfew expired without consequence, the police finally started to attempt to disperse a group of rioters. In doing so, they maneuvered a mass of individuals down the street towards the auto shops. Kyle and others on the premises were verbally threatened and taunted multiple times as the rioters passed by, but Kyle never reacted. His intent was not to incite violence, but simply to deter property damage and use his training to provide first aid to injured community members.

After the crowd passed the premises and Kyle believed the threat of further destruction had passed, he became increasingly concerned with the injured protesters and bystanders congregating at a nearby gas station with no immediate access to medical assistance or help from law enforcement. Kyle headed in that direction with a first aid kit. He sought out injured persons, rendered aid, and tried to guide people to others who could assist to the extent he could do so amid the chaos. By the final time Kyle returned to 2 the gas station and confirmed there were no more injured individuals who needed assistance, police had advanced their formation and blocked what would have been his path back to the mechanic’s shop. Kyle then complied with the police instructions not to go back there. Kyle returned to the gas station until he learned of a need to help protect the second mechanic’s shop further down the street where property destruction was imminent with no police were nearby.

As Kyle proceeded towards the second mechanic’s shop, he was accosted by multiple rioters who recognized that he had been attempting to protect a business the mob wanted to destroy. This outraged the rioters and created a mob now determined to hurt Kyle. They began chasing him down. Kyle attempted to get away, but he could not do so quickly enough. Upon the sound of a gunshot behind him, Kyle turned and was immediately faced with an attacker lunging towards him and reaching for his rifle. He reacted instantaneously and justifiably with his weapon to protect himself, firing and striking the attacker.

Kyle stopped to ensure care for the wounded attacker but faced a growing mob gesturing towards him. He realized he needed to flee for his safety and his survival. Another attacker struck Kyle from behind as he fled down the street. Kyle turned as the mob pressed in on him and he fell to the ground. One attacker kicked Kyle on the ground while he was on the ground. Yet another bashed him over the head with a skateboard. Several rioters tried to disarm Kyle. In fear for his life and concerned the crowd would either continue to shoot at him or even use his own weapon against him, Kyle had no choice but to fire multiple rounds towards his immediate attackers, striking two, including one armed attacker. The rest of the mob began to disperse upon hearing the additional gunshots.

Kyle got up and continued down the street in the direction of police with his hands in the air. He attempted to contact multiple police officers, but they were more concerned with the wounded attackers. The police did not take Kyle into custody at that time, but instead they indicated he should keep moving. He fully cooperated, both then and later that night when he turned himself in to the police in his hometown, Antioch, Illinois.

Kyle did nothing wrong. He exercised his God-given, Constitutional, common law and statutory law right to self-defense.

You have no doubt seen and experienced on social media and Main Stream Media the same thing I have: Liberals are calling 17-year old Rittenhouse a cold-blooded murderer, ignoring the fact that the crowd of paid and unpaid “protesters” (i.e. rioters) attacked him first.

In the eyes of the “New Bolsheviks” whom the MSM and the Democrats (but, I repeat myself) call “peaceful protesters” Rittenhouse had to be gotten rid of because he stood between them and their objective of burning every shop and home in that area to the ground.

In the eyes of the new fascists of the Far Left, average Americans, when being assaulted by wild-eyed rioters, have no right to defend themselves because they “have it coming”.

These bratty new Bolsheviks have been programmed through our educational system and the Main Stream Media to forfeit all traditional faith and values in order to replace those teachings with the “wisdom” of the political ideology which has been taught to them as the “New Gospel”: Marxism.

When you are taught that righteousness comes from your political belief system instead of your faith in God and the saving grace of His Son, then you are free to lie your head off without any reservations or feeling of shame.

That is why the Liberals who you engage with on Social Media have no compunction about calling this 17-year old kid a murderer who carried out a double murder with no reason to whatsoever, while actual reality says otherwise.

Of course, these are the same “useful idiots’ who claim that Joe Biden is not “impaired” at all.

Kyle Rittenhouse will get his day in court.

And, I believe that if these unhinged protesters do not stop attempting to destroy America, that more of these types of incidents will occur.

It is up to them to stop all this mess and to leave Americans alone.