There is an absolutely essential read at American Greatness blog that outlines in the starkest terms The Stakes for Deplorables and conservatives if President Trump is defeated on Election Day.

It is a long read.

It is comprehensive and absolutely spot on.

A Tyranny Perpetual and Universal?

A few of tastes:

Our government in no way functions according to the elevated words on the parchment, and President Trump does not control the executive branch. I say this not to disparage the president but only to state a plain fact. No doubt, he has done his best. I doubt that anyone else could have done better. But while facing a near-universal rebellion from every power center in our society, emphatically including the agencies he was elected to lead, naturally he has found it very difficult to make the federal bureaucracy do what he tells it to do.

The lessons of California and New York show that when leftists no longer face opposition, they do whatever they want—or try to. The problem (for them, for now) is that they still face opposition from the red elements still extant in the federal government, from red states, and from red communities in their own states. Once the whole country has gone blue, though, things will be . . . different.

With opposition eliminated or neutralized, the Left will gin up new enthusiasms with unprecedented zeal, which they will then impose nationwide with enforced pro forma approval, even to the point of requiring feigned enthusiasm. Gay marriage and transgenderism were just the beginnings. We may speculate as to what exactly they will choose next, but they’ll certainly pick something and force the wider society to accept it. Here’s one guess: forcible removal of children from parents who resist their kid’s demand to get on puberty blockers. At first, silence will be acceptable—barely—but over time the Left will insist on affirmative demonstrations of approval for whatever it is they dreamed up yesterday and now insist is an eternal, inviolable principle.

Everyone will have to wear the ribbon. Humiliation is part of the appeal.

the nightly horrors Antifa—and their BLM allies—have wreaked on America’s streets for three straight months with close to zero official attempt to rein them in, and often with officials cheering them on. Examples—from Joe Biden and Kamala Harris to Governors Gavin Newsom, Andrew Cuomo, and Tim Walz, to Mayors Bill de Blasio, Eric Garcetti, Lori Lightfoot, Jenny Durkan, Ted Wheeler, and Jacob Frey—are too numerous to catalog fully. The latest atrocity came from Wisconsin Governor Tony Evers, who, the instant a career criminal wanted on an active warrant was shot while resisting arrest and, it appears, reaching into his car for a knife, took to Twitter to fire up the mob. His state’s fourth-largest city has burned every night since. It took him days to make even a token appeal for calm.

Then consider the fates of those not destroying America in the name of “social justice.” This story is still “developing” as they say, but as of Friday, August 28, a young man who appears to have had a Molotov cocktail thrown at him, a loaded pistol pointed at his face, and his head bashed with a skateboard after being chased by three Antifa thugs is currently in jail on a charge of first-degree murder.

The fundamental right of self-defense—the bedrock foundation of all our other rights—increasingly is not honored if you’re a member of a disfavored group and your attacker is not.

This post deserves to be widely read and widely circulated. 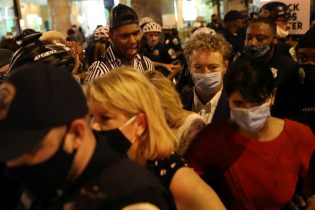