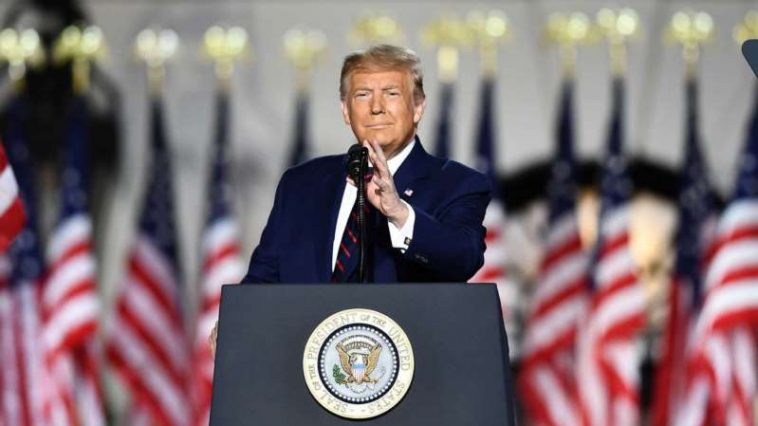 President Donald J. Trump closed out the Republican National Convention last night with style and panache only he could. Here are some excerpts of his acceptance speech…

“We will lead America into new frontiers of discovery and reach new heights of achievement,” he says, as well as a “new spirit of unity.”

“In recent months, our nation, and the entire planet, has been struck by a new and powerful invisible enemy. Like those brave Americans before us, we are meeting this challenge,” he says. “We are delivering lifesaving therapies, and will produce a vaccine before the end of the year, or maybe even sooner. We will defeat the virus, end the pandemic, and emerge stronger than ever before.”

“At no time before have voters faced a clearer choice between two parties, two visions, two philosophies, or two agendas,” he says.

“This election will decide whether we save the American Dream, or whether we allow a socialist agenda to demolish our cherished destiny.”

“It will decide whether we rapidly create millions of high paying jobs, or whether we crush our industries and send millions of these jobs overseas, as has foolishly been done for many decades.”

“Your vote will decide whether we protect law abiding Americans, or whether we give free reign to violent anarchists and agitators, and criminals who threaten our citizens,” he says.”

“For 47 years, Joe Biden took the donations of blue collar workers, gave them hugs and even kisses,” he says, as laughs break out. “And told them he felt their pain – and then he flew back to Washington and voted to ship their jobs to China and many other distant lands.”

“Joe Biden spent his entire career outsourcing their dreams and the dreams of American Workers, offshoring their jobs, opening their borders, and sending their sons and daughters to fight in endless foreign wars, wars that never ended.”

“I did what our political establishment never expected and could never forgive, breaking the cardinal rule of Washington politics — I kept my promise.”

“They are angry at me because instead of putting them first, I put America first,”

“Our country wasn’t built by cancel culture, speech codes, and soul-crushing conformity. We are not a nation of timid spirits. We are a nation of fierce, proud, and independent American Patriots,”

In my opinion, Joe Biden, the 2020 Democratic Presidential Candidate has no chance of winning the Presidency.

The Democrat Elite, including Joe Biden and Kamala Harris, care more for their failed political ideology than they do the average Americans between the coasts, whom Hillary Clinton called “Deplorables”.

Just as Trump did, with his refusal early in his first Presidential Campaign to “act more presidential”, continues to take his message directly to the American People.

As opposed to “Groping Joe”, who is still hiding in his basement, Trump has always been a “people person”.

He knew that the only way to be successful and to stay in touch with the public, was to speak to them honestly and directly, as one would speak to a friend.

Just as President Trump did when he went on a “Thank You” Tour, then his “MAGA Rallies”, and as he continues with his Daily Tweets to the American People..

As the polls show, Trump continues to strike a resonant chord in the hearts of Average Americans, living here in the part of America, which the snobbish Democrat Elites refer to as “Flyover Country”, but which we refer to as “America’s Heartland”, or, quite simply, “HOME”.

The reason being, President Trump is keeping his promises.

He does not talk down to us while disparaging our Sovereign Nation, as the Democrats did in their National Covention and, quite frankly, do every day.

When he speaks, the President of the United States of America, the most powerful man in the world, makes average Americans feel good about themselves and their role in determining the future of our country.

They hear words of hope and encouragement from a man who genuinely LOVES America and her people, instead of viewing us all as racist, misogynist, xenophobes…the 45th President of the United States of America, Donald J. Trump.

And, that, fellow Americans, is why President Trump will be reelected.