.@UnplannedMovie did unexpectedly well at the box office this weekend. Remember, Planned Parenthood still gets your federal tax dollars. https://t.co/VehKDWA02Y

Disney’s star-studded “Dumbo” did not exactly take flight at the North American box office this weekend, while the faith-based film “Unplanned” rounded out the top five flicks with an impressive $6.1 million from only 1,059 theaters.

“Unplanned” was another success for Pure Flix, which targets the faith-based audience.

“We are thrilled, gratified and humbled,” “Unplanned” co-directors Cary Solomon and Chuck Konzelman said Sunday in a statement. “We are so pleased that the American people have responded with such an enormous outpouring of support at the box office. It humbles us and we look forward to seeing what happens in the weeks ahead.”

The film tells the true story of Abby Johnson, who worked at Planned Parenthood for eight years before becoming a pro-life activist.

Meanwhile, the Tim Burton-remake of the 1941 Disney classic did not perform the way other live-action favorites have.

“Dumbo” earned an estimated $45 million domestically from 4,259 locations against a $170 million production budget — less than half of what “Beauty and the Beast,” ”The Jungle Book” and Burton’s own “Alice in Wonderland” opened to.

“Dumbo,” starring Colin Farrell and Danny DeVito, got mixed to negative reviews from critics and currently has a middling 53 percent on Rotten Tomatoes.

It did, however, bump Jordan Peele’s “Us” to second place. “Us” added $33.6 million, down only 53 percent, bringing its domestic total to $128.2 million in its second week. The Lupita Nyong’o doppelganger movie cost only $20 million to produce.

Easing the “Dumbo” disappointment, Disney and Marvel’s “Captain Marvel” landed in third place in weekend four with an additional $20.5 million. It’s now earned over $350 million in North America and is expected to cross the $1 billion mark globally sometime this week.

The teen drama/romance “Five Feet Apart” with Cole Sprouse and Haley Lu Richardson took fourth place with $6.3 million, down only 27 percent in its third week.

Not so lucky was “The Beach Bum,” a stoner-odyssey from the provocative filmmaker Harmony Korine starring Matthew McConaughey. It grossed only $1.8 million from 1,100 locations in its first weekend.

The weekend overall is down around 2 percent and the year is still lagging about 16.4 percent.

Here’s a question that the Liberal Brain Trust in Hollywood are probably asking themselves:

Why are Faith-based Films like “Unplanned” over-exceeding while bigger-budgeted, ballyhooed sequels and remakes of previous blockbusters and other popular culture-driven movies are not living up to expectations?

And, why do well-known stars such Dennis Quaid, Cloris Leachman, and Trace Atkins want to appear in them?

“If you noticed when Larry Kudlow spoke on CNBC yesterday, he ended by saying, ‘However things work out, it will be God’s will.’ That’s an interesting way to talk about being the national economic adviser to the president. ‘God’s will?’”

She has since apologized, much in the same way that The View’s Joy Behar was forced to.

So, if the “Smartest People in the Room” on the East and Left Coasts believe that Christianity is something to be mocked, why are these movies doing so well?

We live in a time in our country where Traditional American ethics and values, including our Christian Faith, have been ridiculed and mocked by the Left and their public messengers as being antiquated, restrictive, ignorant, and even, bigoted.

And the majority of the movies which Hollywood has expectorated out in the last few years have reflected this skewed and intolerant view of Traditional American ethics and values.

If you, like myself , are a Political Junkie, or spend any time at all on Internet Political Website comments sections and political chat boards, you might think that American Christians are an endangered species.

According to a Gallup Poll taken in 2015, 3/4ths of our country believe that Jesus Christ is their Personal Savior and proudly proclaim themselves to be Christians.

Is all this upheaval our nation is feverishly attempting to recover from, with no help from “The Resistance”, “Antifa”, , or whatever you want to call the Anti-American immature idiots, due to some sort of Satanic Influence attempting to tip the scales in the fight between Good and Evil, across our land?

A man, who would be considered a cornball by the standards of today’s Socially-Liberal Fiscally Conservative Liberals, Moderates, and “Libertarians”, wrote a prophetic analysis of today’s current events.

This speech was broadcast by legendary ABC Radio commentator Paul Harvey on April 3, 1965:

If I were the Devil . . . I mean, if I were the Prince of Darkness, I would of course, want to engulf the whole earth in darkness. I would have a third of its real estate and four-fifths of its population, but I would not be happy until I had seized the ripest apple on the tree, so I should set about however necessary to take over the United States. I would begin with a campaign of whispers. With the wisdom of a serpent, I would whisper to you as I whispered to Eve: “Do as you please.” “Do as you please.” To the young, I would whisper, “The Bible is a myth.” I would convince them that man created God instead of the other way around. I would confide that what is bad is good, and what is good is “square”. In the ears of the young marrieds, I would whisper that work is debasing, that cocktail parties are good for you. I would caution them not to be extreme in religion, in patriotism, in moral conduct. And the old, I would teach to pray. I would teach them to say after me: “Our Father, which art in Washington” . . .

If I were the devil, I’d educate authors in how to make lurid literature exciting so that anything else would appear dull an uninteresting. I’d threaten T.V. with dirtier movies and vice versa. And then, if I were the devil, I’d get organized. I’d infiltrate unions and urge more loafing and less work, because idle hands usually work for me. I’d peddle narcotics to whom I could. I’d sell alcohol to ladies and gentlemen of distinction. And I’d tranquilize the rest with pills. If I were the devil, I would encourage schools to refine young intellects but neglect to discipline emotions . . . let those run wild. I would designate an atheist to front for me before the highest courts in the land and I would get preachers to say “she’s right.” With flattery and promises of power, I could get the courts to rule what I construe as against God and in favor of pornography, and thus, I would evict God from the courthouse, and then from the school house, and then from the houses of Congress and then, in His own churches I would substitute psychology for religion, and I would deify science because that way men would become smart enough to create super weapons but not wise enough to control them.

If I were Satan, I’d make the symbol of Easter an egg, and the symbol of Christmas, a bottle. If I were the devil, I would take from those who have and I would give to those who wanted, until I had killed the incentive of the ambitious. And then, my police state would force everybody back to work. Then, I could separate families, putting children in uniform, women in coal mines, and objectors in slave camps. In other words, if I were Satan, I’d just keep on doing what he’s doing.

Christians are fighting back against the surrounding darkness by supporting those movies which reflect the Light and which do not spread the Darkness.

The story which inspired the movie “Unplanned”, as noted in the article at the beginning of this post, is a heart-wrenching testament to the life-saving power of God and the ongoing struggle between “princes and principalities” going on around us as we live our daily lives.

Because we have been given Free Will by our Creator, the choice between right and wrong is up to each and every one of us.

In these turbulent times, when evil is lauded as good and abnormal behavior is glorified as normal, Christian Americans must take time to focus in on what’s really important.

And, it is important that we spend time in contemplative thought about our Faith.

For as the lyrics to the popular Christian Song tell us…

So, gentle readers, stay strong and keep the faith.

For we wrestle not against flesh and blood, but against principalities, against powers, against the rulers of the darkness of this world, against spiritual wickedness in high places. – Ephesians 6:12 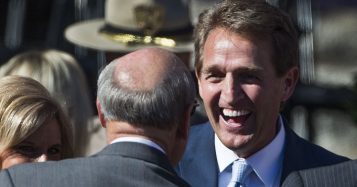