The first golf major of the year will be contested beginning on Thursday with the 86th playing of The Masters at Augusta National Golf Club in Augusta, Georgia.

The home of many outstanding traditions, the Masters features a Par 3 Tournament each Wednesday before the tournament.  Held on a nine hole Par 3 course on the grounds, the tournament includes players kids serving as caddies for their fathers… 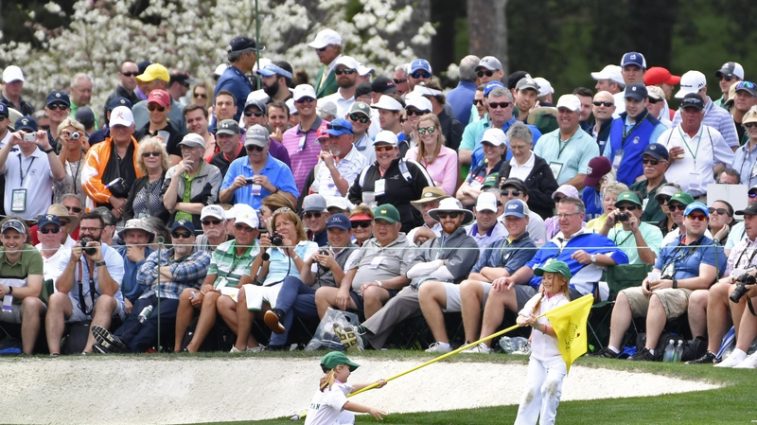 “Of all the traditions at the Masters, none is more endearing than the annual Par 3 Contest. This beloved event, held on Wednesday of Tournament week and now televised around the world, is above all a family affair. Wives and girlfriends, children and grandchildren, nieces and nephews-all happily serve as caddies. The sight of toddlers, outfitted in miniature Augusta National jumpsuits, toting a light bag or tending a flagstick more than twice their height brings smiles to onlookers near and far.”

Part competition, part stress relief on the eve of the crucible that is competing at the Masters, the Par 3 Contest dates back more than half a century. The inaugural exhibition was held in 1960 and won by Sam Snead (who would win again in 1974, one month shy of his 62nd birthday). The varied field consists of Tournament participants, noncompeting past champions and Honorary Invitees. Together they wind their way around a short, nine-hole layout nestled in the northeast corner of the Augusta National grounds. The holes, ranging from 70 to 140 yards, play over DeSoto Springs Pond and Ike’s Pond. There have been 80 holes-in-one made over the years, including a record five in 2002.

The contestant who has the most favorable score against par after nine holes is declared the winner. Famously, no winner of the Par 3 Contest has ever gone on to triumph in the Masters the same year. Not every Par 3 contestant posts a score, however. Many prefer to enjoy a leisurely stroll around the nine holes, occasionally having their caddies attempt a chip or a pitch or tap in a putt.

Occasionally, a golfer will attempt to skip a ball across the water like a flat rock across a pond on one of several of the short par threes over water.  I actually saw Greg Norman successfully do so with a putter back in the 1990 par-three tournament.

The original idea for the Par 3 Contest came from Augusta National Chairman Clifford Roberts. He conceived of it as a potentially distinctive pre-Tournament attraction, but not everyone shared his vision. Roberts had to overcome resistance from within the ranks of the Club’s members, some of whom derided the notion of a “Tom Thumb course.” Little did they know what a cherished tradition the Par 3 Contest would one day become.

Expect a number of holes in ones on the short par threes.

I’ll add a livestream of the Par 3 tournament in the cements section.