Hank the Dachshund just emailed me to say that he has reserved a nice large fresh bone to chew on while watching Trump trash “The Squad” at his rally tonight.

To be held at the Williams Arena, the rally will begin at 7PM Eastern time.

Here is a link to the Right Side Broadcasting Network livestream of the rally.

Hank says he expects Trump to go after the Democlowns in general, and The Squad of radical Socialist freshmen Dems in particular, hard at tonight’s rally.

AOC and her “squad” have had a busy couple of weeks, calling both Trump and Nancy Pelosi racists, and stealing the spotlight from Dem presidential hopefuls and the Dem leadership at large.

The same poll shows socialism approved by only 18% of respondents.

Hank says that as a Republican dachshund, he heartily approves of AOC and her “squad” making themselves the new face of the Democrat Party. 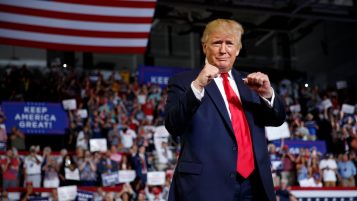