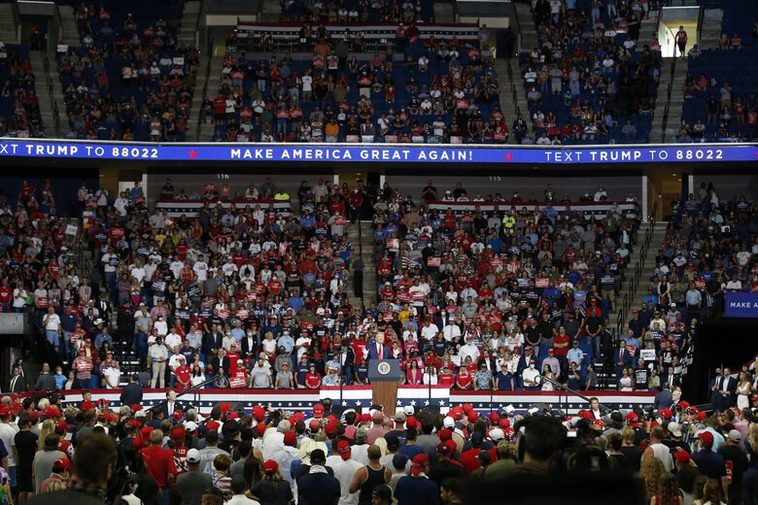 The beginning of the current conservative freak out over President Trump’s chances in November can probably be traced back to the apparent failure of Trump’s Tulsa rally. President Trump has held rallies consistently ever since he began his campaign, and they’ve always been packed to the brim with eager MAGA supporters. Even the spaces outside of the venues have been filled with Trump supporters who were unable to enter.

Naturally, people expected Trump’s Tulsa rally to be just as packed as previous rallies. The country was opening up and getting back on track after Dr. Faux-ci and the CDC advocated nationwide lock downs to protect grandma and grandpa (Democrats such as Cuomo and Whitmer ended up killing them anyway). Trump supporters began lining up nearly three days before the event started. Add to that the fact that over 1 million people had signed up online, and the stage was set for a MAGA rally of epic proportions.

Trump supporters were shocked, then, when the fire marshal and arena management for BOK Center reported that a little over 6,000 people were in attendance. The fake news media orgasmically reported that President Trump’s base had refused to turn out for him. Trumpers that were already rattled with the one-two punch of the Chinese Coronavirus lock downs and #BlackLivesMatter riots freaked out that President Trump was losing support.

Somewhere, on some cruise ship far off in the Caribbean, Bill Kristol giggled like a school girl.

The story never sat right with me, however. As stated before, Trump supporters had lined up for days before the event. Social media was abuzz with anticipation for the first Trump rally since the Chinese Coronavirus pandemic hit. Could it really be that Trump’s Tulsa rally attendance was proof that people had soured on MAGA?

Turns out I was right to be suspicious. The Gateway Pundit actually did a bang up article on Trump’s Tulsa rally backed up with several sources.

An article published several days ago written by an anonymous attendee made the claim that the management for the BOK Center in Tulsa, Oklahoma sabotaged attendance for the campaign rally by President Trump held there last Saturday resulting in thousands of empty seats in the BOK Center and the cancellation of plans for Trump and Vice President Pence to speak to an expected overflow crowd of thousands on a stage set up just outside the arena before speaking at the rally inside.

The fire marshal and arena management put attendance at just over 6,000 while the Trump campaign claimed 12,000 had cleared metal detectors.

A June 25 report by Armstrong Economics claimed that early in the day on Saturday BOK Center staff had placed stickers on every other seat in the arena barring use thereby cutting in half the attendance of the 19,199 seat arena. That report was not corroborated until Friday and Saturday when Billboard and the Washington Post respectively reported on the stickers and pushback by the Trump campaign that had campaign workers peeling the stickers off the seats right before the rally.

The other allegations of sabotage made by the attended are that BOK Center temperature screeners were pulled off the job hours early, thereby making it impossible for rally attendees to get the green wristbands needed to advance to the Secret Service metal detectors for entry into the arena and the overflow stage area for the Trump and Pence speeches, and that cleared attendees were only allowed inside the arena in groups of one hundred at a time.

What makes the allegation of an effort to drive down attendance plausible is the celebratory tweet the night of the rally by Jay Marciano, head of the management company for the BOK Center, AEG–part of ASM Global, on the low recorded attendance, “Lying Don’s show in Tulsa is a big fat STIFF! There are only 6624 people in the arena. So much for “There were requests for 1 million.” Total lies. Are we surprised??

The Gateway Pundit also linked to an article from Armstrong Economics that was allegedly written by a rally attendee. The author asserts that there was a concerted effort made by arena management to sabotage Trump’s Tulsa rally beyond the aforementioned social distancing stickers.

1. BOK Center holds at least 19,000. The area outside the convention center set up by the Secret Service and Tulsa PD had a U-shaped squeeze shoot to funnel the crowd down to an area about. 50 feet wide and 600 feet long with an outdoor stage adjacent to the BOK entrance.Trump was supposed to be able to speak to the overflow group from this stage.

2. Entry to the “Secure Area” NOT the BOK center was about 5 blocks away where you had to pass “screeners” who took your temperature, made you put on a face mask and gave you a green band to proceed to Secret Service Security.

3. If the temperature screeners left their post- the entire entry to the BOK Trump rally was shut down.

4. And that is EXACTLY what happened today about an hour after we got through security.

5. The BOK center just before the doors opened had block off every other seat in the arena so the arena could only hold about 9500 people.

6. After continued back and forth with the trump campaign, something happened to allow more people in (in groups of just 100 at a time). We had to wait about 30 minutes each time for them to let just 100 of us trickle into the building. I am not talking about their security- we had already passed through metal detectors and everything. You could actually run into the building each time they would let just 100 of us in at a time, but that was just just wrong and corrupt on BOK management’s part. They removed the stickers/rule on every other seat – that is true, but only after they shut down all entry to the “event location”.

7. I looked over at the screening area and told my wife- something fishy is gong on- 2 hours before the rally – the screeners have left. I told her- no one can get to the stage/overflow area or the BOK center with the “temperature screeners” gone. It is like the people that collect tickets say- I am done we are leaving.

8. They left their posts and from what I am learning- thousands could not get in to the first checkpoint because the temperature screeners had to put green wrist band on you to gain access to the Secret Service security checkpoint. No green band— no entry to the security check point.

9. I think the BOK management told the screeners – we have reached the capacity for what we are letting into the BOK center, so shut down- do not allow the other Trump supporters to get a temperature check and no more green wrist bands. Do not issue green wrist bands so they can get into the holding area to see the stage for the outdoor Trump Rally.

10. It was all a setup to make it look like the crowds did not show up. The crowds DID show up and after 5pm,- 2 hours before the event- no one was there to let them get to security.

I highly suggest you head over to The Gateway Pundit and read the entire article.

It appears the arena management at BOK Center took deliberate steps to ensure that Trump’s Tulsa Rally was sparsely attended compared to past rallies. MAGA didn’t abandon President Trump that night in Tulsa. Leftists conspired to bar the doors to as many Trump supporters that night as possible, and the fake news media ate it up.

Remember that next time someone tells you that President Trump’s base is abandoning him.