The Fake News LameStream Media is doing everything possible the “create” a U.S. recession, even though the numbers & facts are working totally in the opposite direction. They would be willing to hurt many people, but that doesn’t matter to them. Our Economy is sooo strong, sorry!

Democratic 2020 hopeful John Delaney suggested that some within his party are “cheering on a recession” so that President Trump’s re-election chances are diminished.

When asked by a reporter on Wednesday if he thought a recession was coming, Delaney expressed hope that it wasn’t.

“I hope it’s not,” Delaney responded. “You know, it feels like some Democrats are cheering on a recession because they want to stick it to Trump.”

He continued: “I don’t want a recession because I don’t want these workers in here to face a recession, but I worry that Trump’s policies are bringing one on.”

When pressed on who he thought was cheering for a recession, the 2020 hopeful refused to “name names.”

“I’m not going to name names, but you just get a sense, like my position is very clear, which is I hope a recession doesn’t happen,” Delaney said.

“I just think that it’s very important that we be clear as a party that we don’t want a recession. His economic policies are bad. I think they’re ultimately going to unwind, but I don’t want that to happen. I mean, I’m an American. I want the country to do well.”

He later told another reporter that he didn’t say that members of his party were “actively hoping” for a recession.

BIll Maher sure is.

“Real Time” host Bill Maher doubled down Friday on his desire for the U.S. economy to fall into recession in hopes of blocking a second term for President Trump — telling his panel of guests any hardship that results would be “very worth” it.

“I’ve been saying for about two years that I hope we have a recession and people get mad at me,” said Maher, a multimillionaire who would likely be well insulated from a financial downturn.

“I’m just saying we can survive a recession,” he continued. “We’ve had 47 of them. We’ve had one every time there’s a Republican president! They don’t last forever, You know what lasts forever? Wiping out species!”

The HBO star then pointed to a U.N. report warning how many species of plants and animals are at the risk of extinction and went on to blast the Trump administration for rolling back regulations from the Nixon-era Endangered Species Act “like any evil villain would do.”

“So yes, a recession would be very worth getting rid of Donald Trump and these kinds of policies,” Maher reiterated. “A recession would definitely knock him out of office.”

Earlier this month, Maher revived his argument in favor of a recession and last week found an ally in NBC News correspondent Richard Engel during a panel discussion.

“Short-term pain might be better than long-term destruction of the Constitution,” Engel argued.

The Democrats and their lackeys in the Main Stream Media are positively apoplectic over the economic success that is the Trump Presidency.

Who were these people who found themselves no longer a part of America’s Work Force at the end of the reign of King Barack The First?

They were average Americans like you and me, who, in their very real despair, had given up trying to find a job, choosing instead to work under the radar as handymen or flea market vendors. some not even working at all, sitting at home and letting Uncle Sugar take care of them.

When you ask Liberals about the unacceptable situation left by the 44th President, they will respond to you with charts and graphs designed to buttress their opinion that Obama actually moved America’s Stagnant Economy forward.

And, if that argument doesn’t work, their pre-programmed response is

Quite frankly, the reason that Obama Presidency did not move our economy forward, like President Ronald Reagan did, is because Obama was more concerned about growing the Central Government, than he was about growing American Production by freeing the job creators from punitive tax rates, in order to encourage the growth that will revitalize our economy.

Make no mistake, granting amnesty to millions of unskilled, underage illegal aliens would have done and still will do nothing for the health of our economy.

This action would simply provide future voters for the Democrat Party, which is now firmly in the control of the Far Left. If Obama had granted amnesty before he left office, he would have placed a further strain on our economy, as all of these “little rascals”, would rely on their new Uncle Sugar for their “daily bread”.

A popular Liberal Defense that was going around during Obama’s Presidency was the claim that Reagan actually had a bigger Federal Government than Obama.

You see, boys and girls, that’s the secret of American Exceptionalism, a concept that Obama always gave lip service to, but, clearly, never  believed in.

The current state of the Shining City Upon a Hill can be summarized thusly:

America was formed by men seeking FREEDOM. She grew and prospered because of an indomitable will and spirit forged through the Refiner’s Fire, guided by the common-sense words, inscribed in our Constitution, and administered through a Constitutional Republic. Our nation’s largesse and strength comes through the actions and character of her citizens, not through the usurpation of power by professional politicians, who has long since lost touch with their constituency.

Obama’s attempt to “radically change” our nation into a Third World Barrio was met with resistance, not because of professional politicians, but, because of the defiance of the American People, who love their country.

It was this Defiant Spirit which caused Americans to elect American Entrepreneur and Businessman Donald J. Trump as our 45th President.

And, President-elect Trump recognizes whom he owes his Presidency to.

On November 8th, 2016, average Americans proved that America’s Heritage of God and Country is still alive and well in the hearts and minds of the overwhelming majority of the citizens in this country, even those who have dropped out of the workforce.

A President’s role, if he wants to be viewed positively as a world leader, is to work to restore America to a position of strength, both in foreign and domestic policy.

President Trump understands the mandate that he has been given and has been effectively serving Americans by making deals which are adding JOBS (that “three-letter word” which even Joe Biden says is so important for our country) to bring those who had been separated from America’s Workforce, back into it, helping grow and strengthen our nation’s economy, which, will in turn create more jobs…which will help to MAKE AMERICA GREAT AGAIN .

He understands that it all starts with the Engine That Drives Our Country…Capitalism.

And, President-elect Trump has had his hand placed firmly on the throttle.

The Russians did not stop Hillary from continuing Obama’s “Legacy”.

FED UP AVERAGE AMERICANS DID!!! 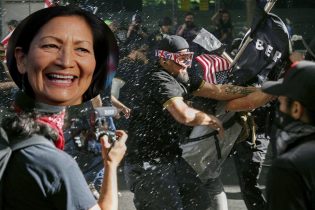