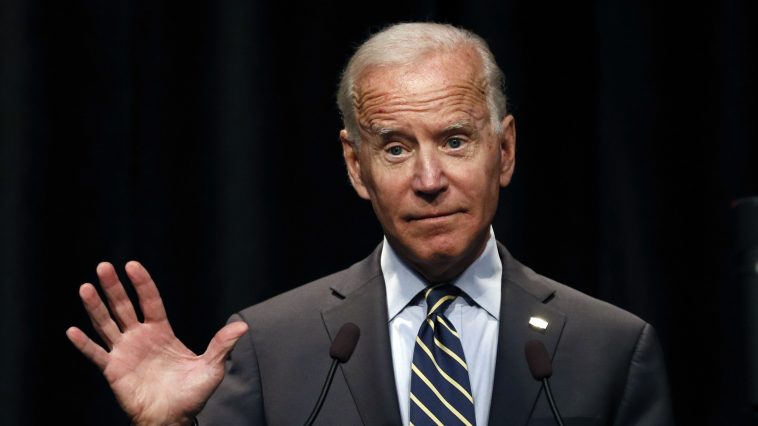 Bonkers Biden said Trump is the first President who is a racist.

It is a false, divisive charge.

It is also proof he is either stupid or demented or both.

Fellow Democrats like Andrew Jackson and Woodrow Wilson were well known racists. There were many others.

Civil rights attorney Leo Terrell said Thursday that presumptive Democratic nominee Joe Biden has been “insulting” to African Americans and claimed he refuses to offer substantive promises of help to underserved African American communities and those that are currently being rocked by crime waves.

Terrell said the mainstream media is painting a false narrative that purports President Trump “doesn’t care” about the victims of urban violence, when the opposite is true.

“[Biden] has not gone to these Democratic cities and embraced the victims like President Trump has. He has not walked hand in hand with police officers,” Terrell told “Bill Hemmer Reports”.

“Joe Biden has insulted every African American by saying if you don’t vote for me, ‘you ain’t Black.’ I’m Black. I’m not voting for him. He’s an insult to every American because people decide on the competency of the candidate – Joe Biden has to help the people in those cities and he’s not doing it. He’s in his basement.”

Earlier this year, Biden told a New York City morning radio program that if African Americans were unsure whether to support him or Trump, they “ain’t Black.” The Delaware Democrat later expressed regret for those comments:

Terrell, who has previously said on Fox News the Democratic Party “left” him, added that Democrats do not want civil order but that the situation has also been the complete opposite in that respect as well.

“The Portland mayor who has been denying access to the federal agents – he was heckled. Translation, these extremists groups protesting, they’re not protesters. They’re criminals. They don’t even respect the people that are defending them, i.e. Democratic mayors,” Terrell added.

When I heard that Sleepy Joe Biden called President Trump a racist, I laughed out loud at Biden’s hypocrisy.

Back in February of 2007, Delaware Senator Joe Biden described his future boss, contender for the Democrat Presidential Nomination, Barack Hussein Obama, in the following manner…

I mean, you got the first mainstream African-American who is articulate and bright and clean and a nice-looking guy,” Biden said. “I mean, that’s a storybook, man.

Liberals’ arrogance often lead them to reveal their own intolerance.

Sleepy Joe became chairman of the Senate Judiciary Committee in the late 1980s and as Delaware Senator supported a crime bill in 1994, saying at the time that his aim was to control violent crime.

Thomas Frank, a Liberal, wrote an op ed for The Guardian back on April 15, 2016, about the unexpected results of the 1994 Crime Bill. In the article he wrote that…

As Leo Terrell referenced, Liberal Democrats have taken the votes of Black Americans for granted for a long time ow.

Candace Owens has done a great job of waking black Americans up to the reality of the Democrats’ feigned “benevolence”.

The problem that the “unintended consequences” of the 1994 Crime Bill, Biden’s racist comment to Charlemagne back in May, and his calling Trump a racist poses for the Democrats is the fact that it shows their hypocrisy.

Instead of fighting against the bill and the “sentencing disparity” which it allowed to continue unabated, Joe performed his imitation of a matador and waved it on through, allowing President Bill “Bubba” Clinton to sign it into law.

And now, unfortunately for Sleepy Joe, the progress of his obvious dementia is causing him to say things which he might be thinking out loud with no filter in between his thought process and his voice box.

Despite what the Democratic-laden Presidential Campaign Push Polls are saying, a lot of Black Americans are going to vote for President Trump this November.

They know, that given the chance, he will bring Black Unemployment back to the record lows n before the Chinese Virus hit our shores.

Watch for more allegations of racism to be made by Biden against Trump.

The Dems are losing the “sure” vote of Black Americans.

And, they are desperate to get it back.