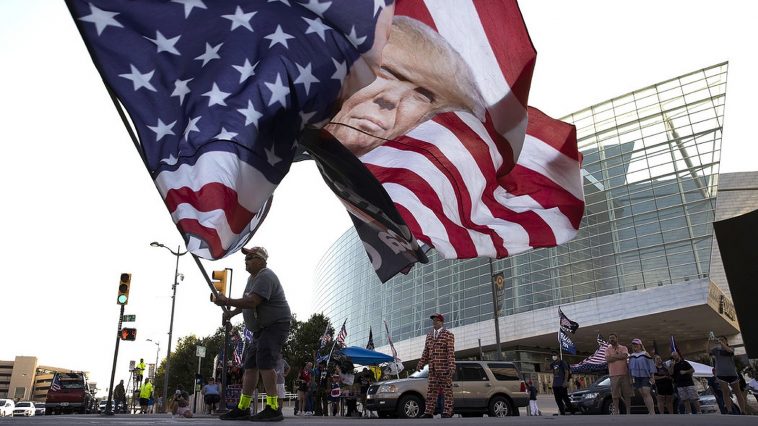 President Trump is getting ready to host his first campaign rally since the start of the Chinese Coronavirus pandemic tonight in Tulsa, OK.

Trump supporters across the country have certainly been looking forward to this event for weeks. Earlier this week Trump campaign manager Brad Parscale announced that over 1,000,000 people had signed up to attend an event held in a venue that seats 20,000.

Over 1M ticket requests for the @realDonaldTrump #MAGA Rally in Tulsa on Saturday.

Before entering each guest will get:

There will be precautions for the heat and bottled water as well.

Meanwhile, Joe Biden is still hiding in his basement, and can’t even fill a small, socially distanced event when he does pop his head out.

Naturally, Leftists have spent the last few weeks freaking out over tonight’s rally. Pundits and Democrats have argued repeatedly that President Trump’s decision to hold a rally is reckless, stupid, and will result in a massive spike in Chinese Coronavirus cases that will kill everyone’s grandma ten times over.

Of course, these same Democrats have spent the last few weeks praising Black Lives Matter rioters and protesters as stunning and brave.

#TulsaTrumpRally has been trending most of the day on Twitter, with plenty of reporters covering the event.

Thousands camped out here by the BOK Center awaiting the president’s rally tonight.

No one we spoke to said they were concerned about coronavirus, even though one man said he had a close friend die from it. #TrumpRallyTulsa @MorganRadford has more coming up on @MSNBC pic.twitter.com/B5DkN9IUBo

The National Guard has been called in to help keep the peace. The Trumpers lined up outside of the arena certainly seem appreciative.

Someone’s driving around a truck with a “mobile death counter.” Supposedly, this truck tracks in real time all of the Chinese Coronavirus deaths caused by President Trump.

So this guy says he’ll be driving around a mobile “Trump Death Clock” at the #TulsaTrumpRally all day.

This is not exactly a hit with Trump supporters. First thing I heard someone say was “what’s that, a counter for all the babies Planned Parenthood kills?” pic.twitter.com/vGJ3CBYjP1

I wonder if this guy did the same for Andrew Cuomo when he was shoving WuFlu patients into nursing homes?

Another protester wearing an “I can’t breathe” t-shirt managed to sneak into the rally crowd. Luckily, the cops arrested her before she could make a complete fool of herself.

BREAKING: A woman entered the rally area wearing an “I can’t breathe” shirt. She says she had a ticket but was asked to leave.

Police dragged her out and arrested her for trespassing after she sat down and refused to leave. pic.twitter.com/7mJwWELJ5J

The woman identified herself as “Sheila Buck” before she was put into a Tulsa Police cruiser and taken away. pic.twitter.com/SXCzZbnSKD

Thousands of patriots have descended on the city Tulsa for the Trump rally and no stores have been looted, no police have been attacked, no buildings have been set on fire and no statutes have been destroyed.

We protect. Not destroy.

Excellent point. Tulsa right now is filled with tens of thousands of Trump supporters, many of them angry as hell about what’s going on in the country right now. Yet no buildings are being burned to the ground. Police aren’t being assaulted. Everything is peaceful.

Tonight’s Trump rally is set to start at 8:00 PM. You can watch a live stream of it below:

Update: Seems Pence and Trump were scheduled to give some outdoor speeches at the venue, but those were cancelled. Leftists are saying it’s because no one showed up. Turns out there’s another, better reason for it.

Secret service called off the outdoor speech due to safety issues. #TrumpRallyTulsa