“You won’t get gun control by disarming law-abiding citizens. There’s only one way to get real gun control: Disarm the thugs and the criminals, lock them up and if you don’t actually throw away the key, at least lose it for a long time… It’s a nasty truth, but those who seek to inflict harm are not fazed by gun controllers. I happen to know this from personal experience.” – President Ronald Reagan

Pollack became an outspoken advocate for school safety since the Parkland shooting, and he has now written a new book detailing his own investigation into the events that led to the massacre.

“I wanted to look into it, I wanted to honor my daughter to see what happened, and how it could happen that I put my daughter in a school, in a nice neighborhood, and then I’m never going to see her again,” Pollack said. “I wanted to know the facts. I didn’t just listen to mainstream media, I didn’t jump on that bandwagon — and I found out that there was a multitude of failures and policies that lead up to my daughter getting murdered, that the mainstream media didn’t want to cover.”

In “Why Meadow Died: The People and Policies That Created The Parkland Shooter and Endanger America’s Students,” Pollack discusses his views on gun control, why he blames Democratic policies for his daughter’s murder, and precautions that parents can take to ensure the safety of their children.

Pollack argued that new gun control laws are an ineffective solution to the school shooting epidemic, in part because current laws are not being enforced.  For example, the Parkland shooter had a violent record, but he was not arrested and therefore able to obtain a weapon legally.

“To me, gun control would’ve been if they arrested him for punching his mother’s teeth out and he got a background,” explained Pollack. “Democrats put these policies in place that don’t believe in holding kids accountable or arresting them while they’re juveniles…so if they don’t arrest them and they don’t get a background, then they’re able to purchase weapons legally and a background check is useless,” he said.

In an interview with “Fox & Friends” Monday, Pollack said that banning guns is not the solution, and he encouraged people to look at the “underlying causes for these shootings.”

“They’re not addressing mental health…or arresting these people when they make threats…those are the real issues,” he explained.

Responding to a recent video featuring 2020 Democratic candidates promoting tighter gun control as a safety precaution in schools, Pollack said it made him “ill.”

“My daughter paid the ultimate sacrifice because of those Democratic policies and I’ve been hurt by the Democrats more than anybody in this country — and I hold them responsible,” Pollack said.

While doing research for today’s post, I came upon this article, which grabbed my attention.

The fact that Democrats are indeed going to continue to come after the guns of law-abiding American Citizens whether they take back the power of the Presidency in 2020 or not.

The Democrats have danced around the truth for years now, parsing words while speaking vaguely about “Gun Control”, while enticing school children to walk out of schools to help facilitate acceptance of a “benevolent” bunch of “Democratic Socialists” violating one of Americans’ Constitutional Rights.

As any American with any common sense whatsoever will tell you, the purpose of “Gun Control” IS control.

The Second Amendment of the U.S. Constitution, regarding the right of Americans to bear arms, was more than just a statement written in a document long ago by our Founding Fathers.

It was an admonition.

By now, gentle readers, I hope that you have taken stock of the fact that every single time there is a mass murder in our Sovereign Nation, before the smoke even clears, Democrat Pundits, both professional and amateur, start drooling from their pursed lips in an ecstatic frenzy to be the first to call for “Gun Control”.

It is not, as Mr. Pollack has warned us, regardless of what the Dems say repeatedly when these tragedies happen, “for the children”.

If Liberal Democrats were so concerned about America’s children, America would not be witnessing the yanking of children from their mothers’ wombs at the rate of 1,000,000 abortions every year.

Make no mistake. Gun control is no more a Democratic Mantra spoken out of concern for the welfare of Americans than Nancy Pelosi is in full control of her mental faculties.

Vladimir Lenin, the Communist Leader of the Bolsheviks and Mensheviks during the Russian Revolution, stated that

Just as during the Russian Revolution, our modern-day Bolsheviks and Mensheviks, whom we call Millenials and Progressives, seem to blindly follow as one the notion that more control somehow means more freedom.

Little do those who are being “sponsored” to march for Gun Control realize that they are being led over a cliff like the herd of lemmings which my generation used to watch in school in those Walt Disney True Life Adventure Movies.

Just as Lenin played upon his followers’ emotions, so are the Democrats manipulating “useful idiots” for their own political purposes.

As Mr. Pollack said, the Democrats do not care about

“…underlying causes for these shootings….They’re not addressing mental health…or arresting these people when they make threats…those are the real issues…”

And, God bless him, he is exactly right.

As one of our Founding Fathers, Dr. Benjamin Franklin, once wrote,

Any society that would give up a little liberty to gain a little security will deserve neither and lose both. 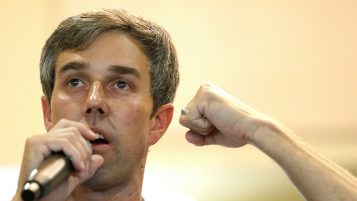