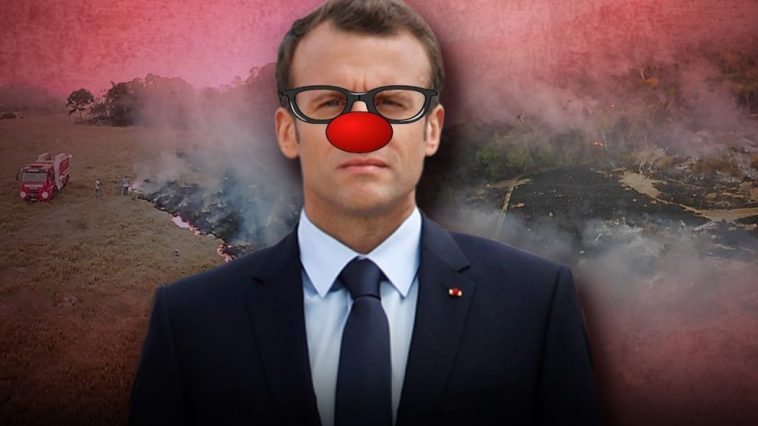 Despite the fact that the Amazon rainforest fires are coming under control, the EU is “suggesting” to European companies that they stop doing business with Brazil:

This year’s surge in fires, which INPE says is the worst since 2010, also raises fears of companies stepping back from Brazil amid adverse publicity surrounding the burning forest and the prospect of international sanctions.

This is very strange, because the EU professes to be upset by the forest fires, and the Brazilian government has made substantial progress towards reducing those fires, and yet is punishing Brazil anyway:

Brazil has registered 2,696 fires in the Amazon in the five days since Saturday, when the military began on-the-ground firefighting efforts, according to data from Brazil’s space research agency INPE. That is down 31% from the previous five days when 3,917 fires were registered before the military response.

The EU also seems oddly disconnected from being righteously outraged over the fires in Angola and the Congo, which are three times as large as the cumulative fires in Brazil (to be fair, Macron so far has thrown out a bone to Africa after being eviscerated online over his silence, but so far he’s not backing it up in any way like he has with Brazil). This image was pulled from the FIRMS Fire Map which is maintained by NASA, Aug. 30th at 10:30AM; also notice SouthEast Asia. It’s like the southern part of the planet has something in common at this time of year, if only the gatekeepers of science and wisdom known as politicians could figure it out…

There’s a few interesting angles in discussing the suddenly collapsing relations between Brazil and the EU. The first is the similarity to how the Russia hoax developed. As with the Russia hoax, the Amazon forest fire panic began with stories in the international media which were mostly false:

The international news coverage of Brazil’s Amazon rainforest fires has been a complete disaster. News outlets published inaccurate yet easily verifiable “facts” about the number of fires, declaring the situation “record-breaking” and “unprecedented.” Social media lit up with misleading claims about the loss of planetary oxygen supply (20 percent, said French President Emmanuel Macron) threatening to asphyxiate us all. Stock photos and images of forest fires from the last two decades including Peru and Bolivia were shared widely and wildly. Celebrities and politicians alike heaped condemnation upon Brazilian President Jair Bolsonaro leading to an ongoing geopolitical crisis.

The New York Times pumped the brakes on the misinformation and published a highly informative map showing the location of the fires on previously cleared land obviously related to farmers and ranchers.

The number of fires and cumulative area burned so far in 2019, on the other hand, is on par with previous years and described as “near average” by NASA.

The socialist leaders of France and Canada have both taken to the netwaves to essentially claim ownership of the Amazons, spreading misleading and outright wrong information about the fires, including the use of a 30 year image of a forest fire from the opposite end of Brazil. The original link there is in Portuguese filtered through an online translator, making the interesting point that most oxygen on the planet comes from the oceans and not the Amazons, but I digress.

In spite of these stories being false, the EU used them as a pretext to take harsh action against Brazil. This is very similar to how the Democrats and the Deep State planted and used fake news from the media as a pretext to launch the Mueller investigation against Trump.

The next question is why the EU is attacking Brazil, and why now? I think there’s two major reasons.

The first is that Macron and Angela Merkel are locked in a power struggle over the future of the EU. For a long time, Germany has been the driver of EU policy, but Merkel’s grip on power is increasingly shaky, and the French, who have fundamental differences of opinion in how the EU should be run, clearly want a turn in the driver’s seat.

The media has been appallingly blatant in its efforts to enshrine Macron as an environmentalist hero who just wants to heal the planet. I believe Macron is trying to look like a strong, bold, and visionary leader at Merkel’s expense.

The other reason the French are going after Brazil is Macron’s domestic popularity rating is also in the tank as well, and he could use a victory of some kind to boost his ratings. Much like China harasses Japan over ownership of the Senkaku Islands or makes bellicose threats toward Taiwan in efforts to distract the population from their own faltering economy, so too is Macron searching for a scapegoat country to use to deflect from his own failures at governance.

Bolsonaro is widely hated by the far left, which is Macron’s base, and Brazil is not as strong economically as the United States or China, so Brazil may seem like an “easy” target for him to attack. Trump’s trade war with China has made him more attractive to his base, so it may also be that Macron is trying in a clumsy way to emulate Trump’s tactics.

Of course, these policies are idiotic and ruinous for the EU and France in the long term. Even though they have had some economic troubles in recent years, Brazil is still the eighth largest economy in the world. A long term trade conflict with Brazil will be extremely harmful for the EU.

Right now, Germany is on the brink of recession, and if Germany goes into recession the whole Eurozone will follow. The EU is also set to lose a gigantic chunk of its economy assuming Brexit goes through without a trade deal in October. Now Macron wants to start a trade war with Brazil? This is an idiotic and ruinous policy at a time when the EU economy is absorbing shock after shock. However, the far left is currently in the middle of a religious revival-like frenzy, and they are reeling from the failures to unseat Trump or thwart Brexit, and they can’t be expected to behave in a sane way.

The absolute inability of the urban liberal bourgeoisie to come to terms with any significant political defeat is the phenomenon I’m dying to see analyzed by serious scholars. (I believe the answer is ultimately theological). https://t.co/FwdQt5s0lA