Democrat congresswoman Alexandria Ocasio-Cortez went on a bit of a rant at the New York Hall of Science this past weekend.

Ocasio-Cortez was discussing the criticism of her “Green New Deal” boondoggle, and launched into a tirade that blasted her critics. Alexandria Ocasio-Cortez declared that she was in charge because she was “trying” to solve climate change.

Alexandria Ocasio-Cortez’s so-called “Green New Deal” debuted to a withering firestorm of criticism from pundits and politicians on both the Left and the Right. Things got so bad for Team AOC that her office was forced to scrub a FAQ on the Green New Deal from their website. The FAQ included such thrilling policy proposals as banning air travel, meat, cow farts, and mandating railroad travel and public transportation for pretty much everything.

At one point one of Team AOC’s staffers attempted to disavow the Green New Deal FAQ, saying that it was a fake document put out by Republicans to make the proposal look bad.

Team AOC later claimed that the FAQ was an early draft that was released by mistake.

Alexandria Ocasio-Cortez’s latest rant came just days after she had ranted about people in Washington, D.C. following her and texting about her behind her back.

No doubt Alexandria Ocasio-Cortez saw herself as some noble freedom fighter standing up against evil corporations and RethugliKKKans in order to provide a brighter future for children everywhere:

Perhaps she saw herself as some pop culture anti-hero taking charge of a dysfunctional Democrat party:

Really, though, the only thing I could think of after hearing Ocasio-Cortez screech about how she’s in charge was this:

Is it just me, or is AOC getting more unhinged with each passing day? 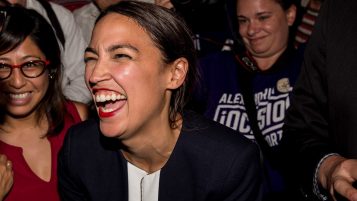