All through the G.W. Bush years, a theme of his administration was the need to fix Social Security. Since Social Security was starting to appear on my horizon, I was paying more attention to the issue. While I had a reasonable savings at that point, it alone would not give me the lifestyle of the rich and famous I had in mind during retirement.

We must make Social Security permanently sound, not leave that task for another day. We must not jeopardize our economic strength by increasing payroll taxes. We must ensure that lower-income Americans get the help they need to have dignity and peace of mind in their retirement. We must guarantee that there is no change for those now retired or nearing retirement. And we must take care that any changes in the system are gradual, so younger workers have years to prepare and plan for their future.

As we fix Social Security, we also have the responsibility to make the system a better deal for younger workers. And the best way to reach that goal is through voluntary personal retirement accounts.

You may remember that the Democrats booed when he said:

For example, in the year 2027, the government will somehow have to come up with an extra $200 billion to keep the system afloat. And by 2033, the annual shortfall would be more than $300 billion. By the year 2042, the entire system would be exhausted and bankrupt.

There’s a lot we can do to improve Americans’ retirement security, but it’s wrong to replace the guaranteed benefit that Americans have earned with a guaranteed benefit cut of up to 40 percent. Make no mistake, that’s exactly what President Bush is proposing.

When asked about when the Democrats would have their own plan, Nancy Pelosi replied:

Never. Is never good enough for you?

President Bush made numerous appearances around the country to drum up support for his plan and the more he did, the more the Democrats fought back, and the more unpopular the plan became. Eventually, President Bush dropped the initiative entirely.

What can you do when another side won’t negotiate with you? In developer Donald Trump’s world, this is pretty unusual. After all, how often do you see something like this where someone refuses to sell their home?

That’s the situation we have here.

There are only a couple solutions available in those rare instances where someone absolutely refuses to negotiate:

I don’t see President Trump walking away. Frankly, I also don’t see having the military build the wall as a viable option. I think it would be immensely unpopular and I think the Democrats would likely impeach — and probably convict — President Trump. By the way, the unpopularity would certainly be aided and abetted by the MSM through a constant drumbeat of “there is no crisis” and “Trump is lying about everything.”

The only option I see available is to change the game in the YUGEST way possible. When I wrote “The Big Deal Government Shutdown Gambit” way back on December 30th, I thought there was some hope of a Win-Win negotiation. I don’t believe this is the case any longer. I believe that the Bush 2005! play has been called and the Democrats are committed to it.

You’re not going to like it but I’m going to say it anyway. If our goal is to secure the border, President Trump will need to propose:

The Democrats of course, will say “fine, do one and two and we can discuss number three down the road, chuckle, sometime.”

I think the hill we should prepared to die on is that the government stays shut down until a bill is presented to President Trump that he is able to sign that does all three things simultaneously.

I hope I’m not throwing in the towel too soon but I believe our president has blown it. Based on what he knew Schumer and Pelosi had said in the past, getting the wall should have been simply a matter of negotiation and a little bit of compromise. I suspect he’s completely befuddled how people can be so in favor of something and not do it purely out of spite and to the detriment of the country.

We, on the other hand, are not at all surprised because that’s who Democrats and the MSM are.

Admittedly, this is a huge gamble since the Democrats will no doubt say some version of “Don’t trust Trump! He’s lying! Vote him out in 2020 and we’ll get you an even better deal!”

I’m afraid it will turn out that Donald Trump will turn out to be Humpty Dumpty without some very big and decisive action — very quickly — and selling like no person has ever sold before! 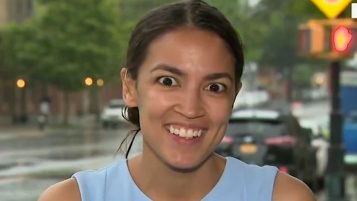