Details about Justice Department official Bruce Ohr’s meetings with the author of the salacious anti-Trump dossier were shared by Ohr with his expansive circle of contacts inside the department — including senior FBI leadership and officials now assigned to Special Counsel Robert Mueller’s investigation, Fox News has learned.

Ohr gave a closed-door transcribed interview last August sharing details of his 2016 meetings with British ex-spy Christopher Steele, who authored the dossier later used to secure a surveillance warrant for a Trump campaign aide. The interview was part of the Republican-led House Oversight and Judiciary Committee probes.

In a series of questions about his meetings with Steele, including one on July 30, 2016, and who he shared the information with, Fox News has confirmed the Ohr transcript stated: “Andy McCabe, yes and met with him and Lisa Page and provided information to him. I subsequently met with Lisa Page, Peter Strzok, and eventually (an FBI agent). And I also provided this information to people in the criminal division specifically Bruce Swartz, Zainab Ahmad, Andrew Weissmann.”

“Andy” is Andrew McCabe, the former FBI deputy director and acting director who left the bureau after the DOJ Inspector General concluded he lied about his role in a media leak about the Clinton Foundation on the eve of the 2016 presidential election. His case is now with the U.S. Attorney in Washington, D.C.  Former FBI Agent Peter Strzok and lawyer Lisa Page, whose anti-Trump texts emerged after the election, left the bureau last year.

The FBI asked Fox News not to disclose the name of the other agent who met with Ohr. The agent later worked on the case against then-National Security Adviser Mike Flynn in January 2017 which helped form the basis of his guilty plea for lying to the FBI.

According to online bios, Bruce Swartz was identified as a deputy assistant attorney general. Andrew Weissmann was chief of the DOJ Criminal Division’s Fraud Section before becoming a senior prosecutor on Mueller’s team handling the case of former Trump campaign chairman Paul Manafort. According to a May 2017 New Yorker profile, Zainab Ahmad worked at the U.S. Attorney’s office in the Eastern District of New York and took a leave to work for then-Attorney General Loretta Lynch at the Justice Department’s Washington headquarters. Ahmad is now assigned to the special counsel’s investigation.

Fox News asked the FBI, Justice Department and special counsel’s office whether the meetings with Ohr over Steele and the dossier were consistent with — or in conflict with — existing DOJ or FBI rules, including chain-of-custody procedures for handling evidence. In addition, the special counsel’s office was asked whether Weissmann and Ahmad had fully disclosed their contacts with Bruce Ohr and others over the dossier. The FBI and special counsel declined to comment; the DOJ did not immediately respond.

Of course, Ohr’s wife, Nellie is an employee of Fusion GPS and worked on the anti-Trump Dossier.

Andrew Weissmann, presently on of Special Counsel Robert Mueller’s  “Lead Investigators”, is a veteran government prosecutor known for his work on the Enron task force and for going after mob figures in New York.

1. Weissmann Served as the FBI’s General Counsel Under Robert Mueller – Before his tenure at the FBI, Weissmann was a partner at Jenner & Block in New York for five years.

2. Weissmann Led the Enron Task Force but Not Without Controversy – Time after time, courts have reversed Weissmann’s most touted ‘victories’ for his tactics. This is hardly the stuff of a hero in the law. Weissmann, as deputy and later director of the Enron Task Force, destroyed the venerable accounting firm of Arthur Andersen LLP and its 85,000 jobs worldwide — only to be reversed several years later by a unanimous Supreme Court.

3. Weissmann Donated Money to President Barack Obama – Weissmann is a Barack Obama and Democratic campaign donor, according to federal records. “Weissmann, who led the Enron investigation, previously gave $2,300 to Obama’s first presidential campaign in 2008 and $2,000 to the Democratic National Committee in 2006, the same year Democrats won control of Congress.

4. Weissmann Attended Princeton & Columbia Universities & Prosecuted Mafia Crime Families – According to the DOJ press release, Weissmann “began his career with the Department of Justice in 1991 at the U.S. Attorney’s Office in the Eastern District of New York, where he served in various leadership positions, including as chief of the Criminal Division. According to Mother Jones, one of the people Weissmann prosecuted had ties to Trump. “As a prosecutor in the Eastern District, Weissmann signed a 1998 cooperation agreement between the US government and Felix Sater, a violent felon and securities trader who had pleaded guilty to financial crimes. Sater went on to become a confidential informant for the FBI and a Trump business partner,” the magazine noted.

5. Some Conservatives Have Noted That Weissmann Was in a Position of Power During the Clinton Uranium Controversy – Some conservatives contend that Mueller has a conflict of interest because they argue the FBI, under his stewardship, should have more thoroughly investigated Bill and Hillary Clinton over a uranium deal known as Uranium One. National Review notes that Andrew Weissmann ran Obama DOJ’s Fraud Section during this time frame.

What the Fox News article at the beginning of this post does not mention is the fact that a second dossier was prepared by Clinton Confidantes Cody Shearer and Richard Blumenthal.

According to Judicial Watch…

Blumenthal and Shearer are connected to a global network of intelligence and military freelancers. They played a dangerous game meddling in Libyan affairs after the fall of Muammar Gaddafi. They supplied intelligence to Secretary of State Clinton in the weeks leading up to the Benghazi debacle and pitched deals to make money off the Libyan turmoil. ProPublica reports at length on the Blumenthal and Shearer’s Libyan efforts here. According to Judicial Watch’s reporting, during Mrs. Clinton’s State Department tenure, Blumenthal also promoted African business deals and meddled in European Union elections.

As for Shearer, he has a long history of dirty tricks. He’s been linked to Whitewater-era efforts to dirty up Bill Clinton critics; to shakedown politics involving the Cheyenne-Arapaho Indian tribe; and to fronting for Bosnian Serb butcher Radovan Karadzic.

The Guardian reports that the new Shearer document makes some of the same allegations about Mr. Trump as the original Christopher Steele dossier, including “lewd acts at a five-star hotel” in Moscow. It also notes that Steele passed on the Shearer report to the FBI in October 2016, but would not vouch for its accuracy. That’s worth pausing over.

According to the Guardian, Steele provided “a copy [of the Shearer report] because it corresponded with what he had separately heard from his own independent sources.” If the reporting here is accurate, that’s quite a coincidence—that Cody Shearer and Christopher Steele were hearing the same things from different sources at pretty much the same time. A closer look at timelines and sources might be revealing. If Sid and Cody are behind the original Russian dossier sources, that would be big news indeed.

I do not doubt at all that Bruce Ohr was familiar with that second dossier and if he was familiar, he probably shared those details with the FBI, as well.

I have written before as to how intricate and strategically planned this whole effort to sabotage the Trump Candidacy and now, the Trump Presidency actually is.

The scope of the players is both fascinating and horrifying at the same time.

The professional bureaucrats in the Department of Justice and the FBI who are involved had worked in the Halls of Power for several years.

It is frightening to believe that they were actually able to justify their covert operations against the will of the American People as being “for the good of the country”…and the Washingtonian Status Quo.

The more time that passes and the more details that come out, firmly convinces me that this is the biggest Federal Government Scandal in history.

And, the same Deep State Bureaucrats involved in 2016 are still involved in the ongoing attempt to bring down President Donald J. Trump and undo the results of the 2016 Presidential Election.

Watergate was a fight between kids in a sandbox compared to this convoluted catastrophe.

The sooner this whole mess is wrapped up and the guilty swamp creatures are exiled from the D.C. swamp, the better off this country will be. 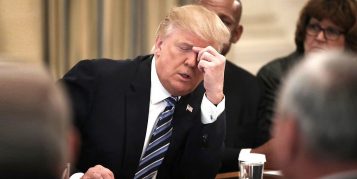