What are We Playing This Week?

In testing out my new capture hardware, I’ve been playing a few random games – Dual Core (WiiU), Mario Kart 8 Deluxe (Switch), Star Wars Pinball, The Walking Dead Arcade and of course the new Super Mario Odyssey. The latter is great fun and so far seems to be everything that the glowing reviews are claiming it to be. The Switch is going to have an amazing holiday season.

The Steam Halloween Sale – Jump on it while it’s hot!

The Big Buck Hunter Championships Took Place In Las Vegas This Past Weekend; Over $100k In Cash Prizes

New Game Announcements Coming This Week For The PS4/PSVR – and as the site mentioned, maybe the PS5.

One of Those: Spelunky 2

If You’re Getting An XBX, Here’s A List Of Games ‘Enhanced’ For It

Next From Stern Pinball: Guardians of the Galaxy (I expected this to be announced tomorrow but I guess that will be a bigger unveil)

THE KINECT IS DEAD! LONG LIVE THE KINECT! – Yep that’s right. Microsoft’s “You Are The Controller” device is now officially dead as a doornail as MS has halted production of the device. Business Insider has a spread one why it failed, appropriately putting the ‘no good games’ as #1. It was a similar problem to what Nintendo found with the Wii in convincing 3rd parties to make innovative games with the Wiimote but Nintendo could plow through by setting examples for others to follow. Microsoft has never been on that level, relying on 3rd parties to carry their water so between that and the occasional fault in its functionality, it really isn’t surprising.  Will the same thing happen with the HoloLens? It is certainly possible but that could be why MS is taking their time in rolling that out instead.

Outcast: Second Contact (PC/PS4/XB1) – Outcast is an action/adventure game originally released for PCs way back in 1999. It stood out graphically but using a height mapping/voxel engine blended with 3D polygons but remained memorable thanks to the voice acting done for the main character. From this trailer, it sounds like they found someone to pull off the same kind of charm/snark that the original had. This remake is launching on Nov. 14th.

Jaws of Extinction Hits Steam Early Access – If you need another zombie survival game then here you go. This game failed in its Kickstarter funding efforts so Early Access for the next year or so it is.

Fash Cash In Super Mario Odyssey – While I did grab the game, I haven’t been able to get terribly far, just reaching the cold desert place to do a little exploring & coin/moon collecting. That said, it’s a fun game that I’ve been enjoying. If you want to make bank, here’s a spoilery video for ya:

Game Music Of The Week (Splatterhouse Arcade) …From The Lagoon: Happy Halloween! The Splatterhouse soundtrack would be good to put on a loop if you have outdoor speakers:

Homebrew of the Week: Crazy Priest (Commodore Amiga) – Not sure what makes it ‘crazy’ but if you like single screen collect ’em puzzle games and still have a working Amiga, this might be of interest:

Getting An iPhone X? You’d Better Be Ready To Pay Out The Nose To Fix It

Microsoft Resurrecting The Intellimouse For $40

Tesla Eyeing A Factory In China

South Korea Developing A “Frankenmissle” To Counter The North

I am your father pic.twitter.com/3BBqcsnzUc

Amazon Key – The Next Big Thing To Be Swept Under The Rug – I would really like to be a fly on the wall of the Amazon meeting room where someone came up with this incredibly stupid idea of letting delivery people access into your home. “Oh but it’ll have a camera”. Yeah, how about no. Talk about someone getting the ego stroking yes man treatment. Granted, Wal-Mart announced the same thing too a little while ago but no one seemed to have noticed.

The Polaroid Pop – Playing on nostalgia of the Polaroid brand, it is trying to make a comeback, with the Pop device being the latest way to print photos from your cell phone. They are $200 on Amazon:

Batband Bone Conduction Earphones – If you are tired of using earbuds or earphones, now we’ve got “bone conduction”. Reviews of such devices do seem rather mixed though:

“Coffee Freedom” With NowPresso – I’m not a coffee drinker but for those who are and are always on the go, this compact, travel espresso machine might be for you:

Space Pr0n Of The Week: “The Lost Cosmonaut” – Instead of commenting on a photo this week, here’s an alleged recording taken in 1961 of a female Russian Cosmonaut who burned up as her poorly made Soviet craft re-entered Earth’s atmosphere. There are other “Lost Cosmonauts” that were recorded, making for a variety of conspiracies that people chew over. 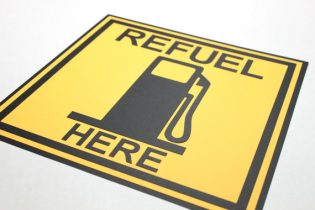