Happy Independence Day (eve) everyone! Here’s a collection of gaming and technology news that has come along over the past week. In case you are wondering about the pinball machine pictured on the front, it is called Freedom and was released by Bally in July 1976 as a part of the bi-centennial celebration fever that the country was caught up in at the time. Compared to most pinball machines these days, it is a bit simplistic. We should develop a MAGA pinball machine to celebrate.

Busy life has meant that I’m only gaming in arcade-quality chunks, with some Dariusburst Another Chronicle on one hand and some Millipede on the other. I also gave a track in Cruis’n Blast a spin to entertain my 1 yr. old who always enjoys a visit to the business. Speaking of children, my kids have really been getting into Tomadachi Life on the Nintendo 3DS.  How about you?

WiiU Receiving Some Late Love From The Turbografx-16

8 Features Coming To The Xbox One

Not Interested Until They Actually Use An NES D-Pad

Popular Card Game Race For The Galaxy Now On PC

From breaking news and entertainment to sports and politics, get the full story with all the live commentary.

Gaming Media TriggerWatch  I can’t imagine that you are sick of winning yet – one of the reasons President Trump is where he is today is because he takes on the dishonest media with a courage unseen in any politician in our lifetime.

If you find an example of a gaming media snowflake melting into delicious, hydrating tears, share it in the comments below. I’ll start us off with this website that normally is supposed to talk Sonic The Hedgehog but just got Legit Triggered:

I’ve been staying away from RL politics here lately. But I have friends who work at CNN. They’re legit afraid. The bodyslam vid is not OK. T

Maybe if your ‘friends’ at CNN are truly worried for their lives, they shouldn’t make careers out of inventing news, deceitful edits and destroying lives of anyone that gets in the way of their agenda while they gleefully push 24/7 for the assassination of a sitting President? If they can’t take what they dish out, they’re in the wrong business, cupcake.

Gundam Versus Coming To PS4 Stateside on Sep. 29th – For those into giant mecha battles, this one’s for you

Pinball FX3 Announced for PC/PS4/XB1 – The popular virtual pinball game is getting a new edition, one that will feature more multiplayer & tournament features. It will also let you carry over your tables that you bought with FX2 which is a nice touch:

Pinball FX3 is the BIGGEST, most COMMUNITY focused pinball game ever created. www.pinballfx.com Pinball FX3, the next generation pinball platform that will redefine the console pinball experience. Designed to bring the community together like never before, Pinball FX3 is built around multiplayer match-ups and competitive tournament play.

Comparing Switch To WiiU On The New BOTW DLC – Self-explanatory, in case you enjoy these comparisons:

here is a Head to Head Comparison between Zelda Breath of the Wild, DLC Pack1 on Nintendo Switch and WiiU.

AereA, the Musical RPG – Rhythm gaming and RPG aren’t two genres that get a mash up that often but Aerea takes it head on. It was available on PC first and now is available for the PS4/XB1:

Music themed Action RPG AereA is out now both boxed and digitally for PlayStation® 4, Xbox One and PC! Follow us on Facebook: https://www.facebook.com/aerearpg/ For more info, visit: http://aerea-game.com/ AereA on Steam: http://store.steampowered.com/app/573660/AereA/ AereA on PS4: https://store.playstation.com/#!/en-gb/search/q=aerea AereA on Xbox One: https://www.microsoft.com/nl-nl/store/p/aerea/c5h7kszfcrxt Published by SOEDESCO® Website: http://www.soedesco.com/ Facebook: https://www.facebook.com/Soedesco Twitter: https://twitter.com/soedesco Instagram: https://instagram.com/soedesco About AereA AereA is an Action RPG in which music is both your best friend and your worst enemy.

The Xstation – A PS4 & Xbox One…As One – Remember at the beginning of the HD format wars when you’d have “dual format” Blu-Ray and HD-DVD players? This is kind of like this but one of those unofficial DIY projects:

This time I smash a XBOX ONE S and a PS4 Slim into one small console to end all console wars! This is not a laptop this time, its a single home gaming console with both of your favorite systems inside! More info at http://www.edsjunk.net/ Subscribe for more videos!

Game Music Of The Week: Hyrule Castle, Surf Rock Edition (The Legend of Zelda: A Link To The Past) – I’m certain that most people didn’t imagine any Zelda song getting the surf rock treatment but odd as it sounds on its face, this works. This one-man band has several video game covers re-imagined through different genres so perhaps we’ll have to share some more in coming weeks:

Homebrew of the Week: Crystal Quest (Atari 7800) – After a long 5 year wait, news has hit the wires that the Wonder Boy-like platformer Bentley Bear’s Crystal Quest has been produced and will be available for sale at Atariage.com very soon. Sure, it’s too late for the 7800, a console that fans wanted something like Super Mario Bros. on since 1989 but better late than never works for many classic collectors.

Complete playthrough to victory showing both the no bonus and maximum bonus endings. Utilization of the temporary invincibility hat is seen on a few occasions. Several extra lives acquired but many also left to be discovered by the player. Some hidden areas shown; bonus/hidden level is not shown.

Eliminate Lower Back Pain Via Brain Implants – Pain Is Futile?

China Loses Their Biggest Rocket Yet – I guess they stole the wrong specs, amirite?

Today In ‘Oops, Our Climate Models Are Wrong Again’, Leaves

The Pizza-kini Is Real And It’s Spectacularly Pricey

Making America Great Again – Energy Independence & Dominance – This week was full of liberal head-splodey, tear-based hydration goodness and while they were having their collective stroke over President Trump’s trolling, he was moving forward on implementing policy that is going to be a huge boon to the American economy. While natural gas resources will play a big role in it all as we approach becoming an exporter in that area but headlining the top of those plans is reviving our nuclear power sector. Read the initial plan here; if you missed it, here is President Trump’s speech:

More Veterans Receive The DARPA LUKE Arm – The LUKE Arm as you can see here is one of the more advanced prostetic arms that has come along to address the pressing need for our injured veterans. Read more about it here or check out the video:

The LUKE Arm: Fulfilling a Promise to Wounded Warriors

The holiday season is bringing high-tech offerings for U.S. war veterans this year in the form of sophisticated bionic arms developed under the direction of DARPA’s Revolutionizing Prosthetics program.

Google Fined Some Big Bucks By The EU – I’m sure you heard all about this one by now as Google gets slapped with a $2.73 billion fine. This was mainly for their promotion of Google Shopping in searches. I’m not sure I find a side to ‘root’ for in this fight as both organizations are loathesome and monopolistic to their core.

The ‘Quiet’ Supersonic Plane – NASA hasn’t been all about wasting time on globull wahrming jazz and virtue signalled Islamic outreach, the organization along with Lockheed Martin says that they have achieved their first milestone the “X-Plane” design which generates a quieter sonic ‘thump’ instead of a ‘BOOM’. It’s still quite a ways off – if the designs that NASA finds work out then we wouldn’t see commercial supersonic using the tech until the 2030s but it is still an interesting evolution of the tech.

The Future of Supersonic Travel: From Sonic ‘Boom’ to Sonic ‘Thump’

Sony’s Digital Contact Lens Patent – Augmented Reality based contact lens are an interesting idea that are mainly based in sci-fi, slowly inching towards commercial reality.  For anyone who has used contact lenses though, you are probably very skeptical about this stuff every time you hear about it though since non-AR contact lenses aren’t without their issues. Seems like the only ones that really work are the more pricey ones, a pair doesn’t last terribly long and at least for me, I can never go through a full day without dryness causing an issue. For this Sony idea it seems like this is something spy agencies would be interested in although apart from the normal cons of contacts, I can’t imagine that the video that this would create would be that watchable. Our eyes are constantly making quick movements that we never think about and image stabilization only works to a certain degree:

ALEXANDRIA, VIRGINIA -Tech giant Sony has joined the race to develop digital contact lens technology. Sony has plans for a wearable lens that can take photos and video, according to an application filed with the U.S. patent office, Tech Story reported. Sony filed a patent in the U.S.

Space Pr0n Of The Week: The Eagle Nebula: There isn’t a MAGA Nebula yet that’s all red/white/blue so we’ll settle for the next best thing, The Eagle Nebula. This is where those famous “Pillars of Creation” are, they are easily visible in the center of the pic here: 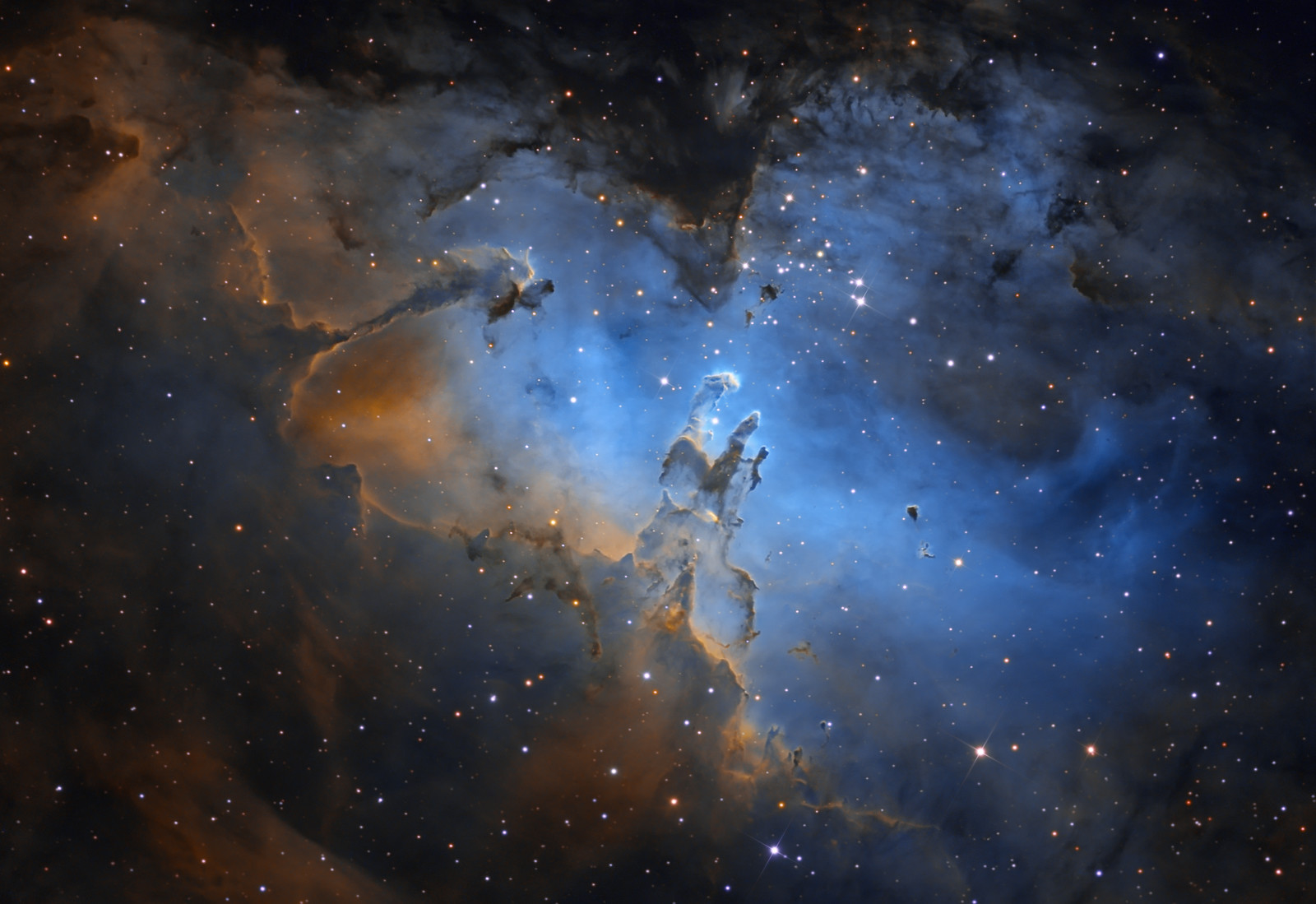