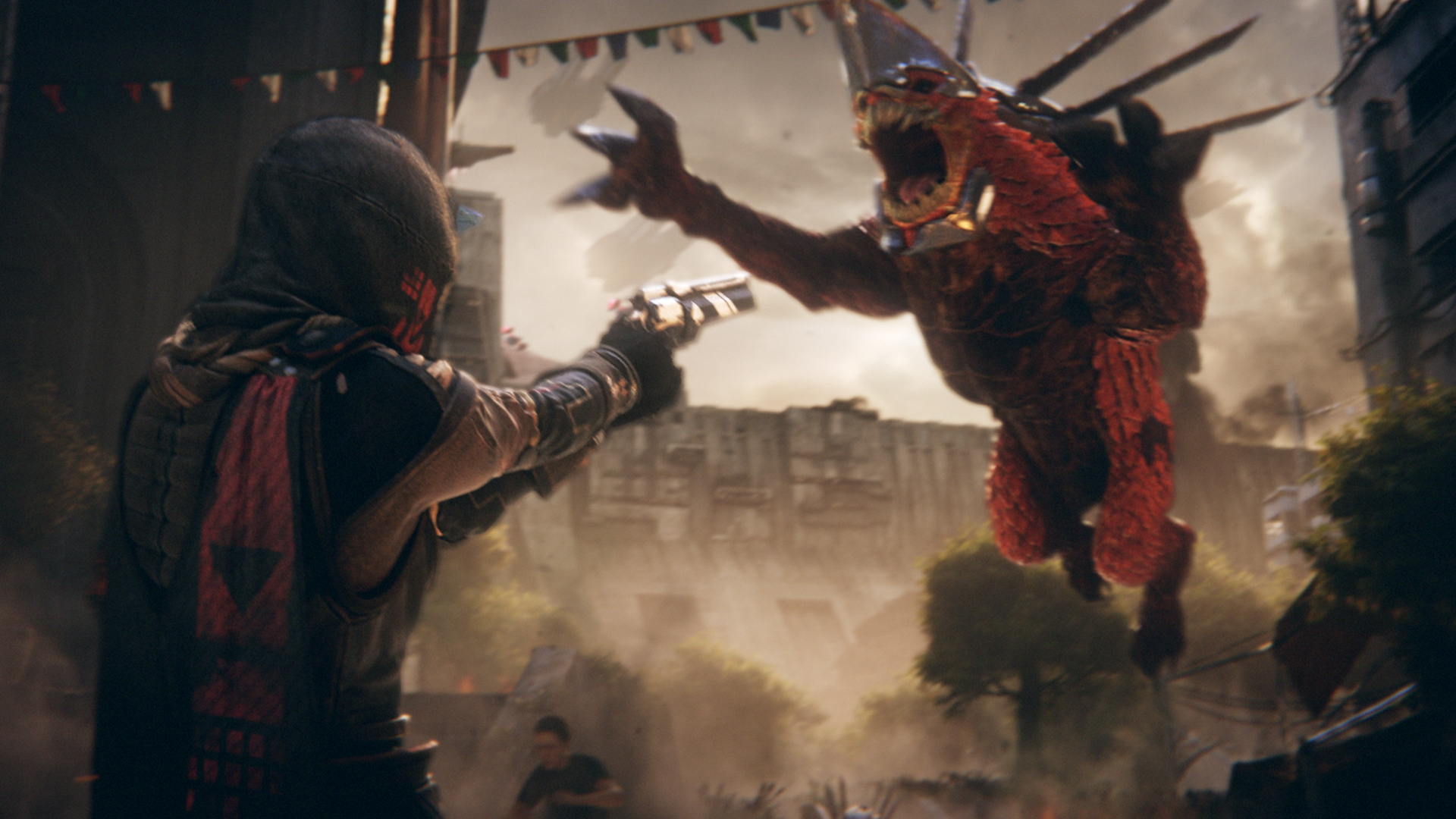 Welcome to the latest edition of gaming/tech news and headlines. Let’s jump to it!

What Have You Been Playing This Week?

This week was odd in that I was able to find some actual gaming time for once. I’ve changed it up a tiny bit from just Zelda…although on that game I almost have all 120 shrines completed. I’ve played some Mario Kart 8 Deluxe and then spent some time with my older consoles. I played Tempest 2000 (Atari Jaguar) where I am a little rusty but posted a decent score; I also played some of my arcade games in between finding some time on my hands – Dariusburst Another Chronicle and The Act: An Interactive Comedy which I repaired after it had been collecting dust for a couple of years.

I downloaded GOG’s free game offer of Mount & Blade but work was too busy to be able to really check that out so I’ll make time for it this week.

AC/DC Pinball Back In Production For A Limited Time

Robotron 2084-clone Nex Machina Coming To PS4/PC June 20th – Housemarque worked with Eugene Jarvis and an arcade build is in the works too.

Platinum Games Enigmatic About Their Next IP

NES Classic Was Outselling the PS4 & XB1 In April – If I was Nintendo, I would be thrilled to have two products crushing the competition instead of just one. #nintenderp

Old But Fun: There Is No Such Thing As “64-bit Graphics”

The Limited Edition Pokemon Watches That Cost A Mere $258,000 Each

Far Cry 5 Eschews Tropical Dystopias For….Montana – Not that there’s anything wrong with Montana but it’s a departure from where Far Cry usually takes place:

Far Cry 5 is Available Now. Check Out the Trailer Here http://bit.ly/FC5Trailer Learn more at farcry.com. Welcome to Hope County, Montana. Tune in on May 26th, 2017 to watch the Far Cry 5 Announce Trailer. Subscribe to our YouTube channel now.

Destiny 2 Gameplay Trailer (PC/PS4/XB1)- The highly anticipated sequel to Bungie’s non-Halo IP is well on it’s way to consoles. It won’t be getting a Switch port but the other current platforms will support it. If frame rate matters to you then naturally the PC will knock it out of the park – PS4/Ps4Pro and XB1 versions will be locked at a paltry 30FPS while PC will “go as high as 144 FPS”

From the makers of the acclaimed hit game Destiny, comes the much-anticipated action shooter sequel, Destiny 2. Experience an all new cinematic story campaign, innovative cooperative gameplay, and intense competitive multiplayer as you journey across unexplored worlds to discover an arsenal of weapons and devastating new combat abilities.

Advance Wars-Like Tiny Metal Announced (NSCH / PC / PS4) – I never could get into Advance Wars for some reason but I know that it has a decent fanbase behind it. Official website with more details can be found here.

Arkanoid Vs. Space Invaders Announced For Mobile – The classic game mash-up fad continues. Every time that Taito does something these days, it’s almost always something for mobile. Granted, I have a strong pro-arcade bias so when I see games that should use a hard controller like a knob being ‘touchscreenified’, something inside me dies a little.

Two of the most iconic classic games ever made meet in Arkanoid vs Space Invaders! Combines the exciting shoot ’em up and block breaking gameplays in one game: reflect the invaders bullets right back at them, gather energy and trigger Attack Mode to destroy your enemies.

Endless Space 2 Getting Positive Reviews (PC) – If you’re looking for a new space combat/strategy game then Endless Space 2 might be what you are looking for. The reviews on Steam are currently “very positive” although PC Gamer notes that it has issues and “will be a better game in six months.” This sort of reminds me of some old DOS games I used to play like Stellar Conquest 3.

New Footage Of Middle-Earth Shadow Of War: Getting hype for the next LOTR video game? Perhaps this will tide you over:

Take a look at some new gameplay for Middle-earth: Shadow of War. Talion and Celebrimbor take on a heavily guarded fort with their Orc army in tow. Beware of fire drakes. Subscribe to GameSpot! http://youtube.com/GameSpot?sub_confi…

Homebrew of the Week – Twin Dragons (NES, PC): What better way to offer NES-like graphics for your indie game than to be limited to the NES hardware?  This follows several typical NES platformer design ideas so if that’s your kind of game, check this out.

Twin Dragons is a cute side-scrolling action game from Broke Studio. I was sent an early build of the game by the team who created the game. The game is successfully being funded on Kickstarter, and currently reaching for stretch goals. A demo is available to play of this game at the bottom of the kickstarter link.

Albert Einstein’s Papers Have Been Translated And Are Available Online

Too Much Tech Bad For Early Development? – I’ve wondered about this as my current 17mo. old has been enamored with tech. If it has a display, she has to play with it.

Kotlin Is Now The Official Programming Language For Android – Never heard of Kotlin? Join the club

If You Use Zomato, Your Account Info Is Probably Now On The Dark Web

No Country For New Heroes – For as nasty and dishonest as American media can be, the British media works hard at setting a standard for ruining normal people’s lives and show just how cold modern man can be. Figure out how to stop the spread of a historically nasty cyber-attack and get doxxed.

This guy figured out how to shut down the biggest ransomware attack in history. This is his reward.

Can Plants Hear? – This all depends on how you define a lifeform interpreting vibrations but I think all of these media outlets calling it hearing is a disingenuous stretch. Hearing isn’t the only sense that interprets vibrations but either way, plants do have a sense for finding water.

AutoFeed ScrewDrivers – I guess these have been around for a few years but I only stumbled across it now. It’s certainly something that a general contractor would probably want to have in their arsenal of tools.

SHORT FILM ABOUT THE BENEFITS AND FEATURES THIS TOOL PROVIDES.

This is SPARtool – given that this is the Sparta Report, this might just be one of those officially unofficial tools of the site. Made for survival, it’s a shovel that also serves as an axe, a hammer and a pick:

Are you a survivor? Visit http://spartool.com/ SPARtool is the ultimate survival tool – the one item you would want to have to accomplish any task on your urban or wilderness adventures. It’s light enough for backpacking where every ounce counts, but is also practically indestructible with solid tempered carbon steel and impact grade Zytel construction.

Microsoft’s Apple Witch Hunt – Another comedic take on tech from BYUTV’s Studio C. I can’t remember if I shared their fun at Apple’s expense before…I’ll save that for next week 😛

Microsoft Punishes Apple Users. Are YOU loyal to Microsoft or Apple? Are you morally opposed to one of these giant tech companies?? Well check out our video and find out how this rivalry plays out BEHIND THE SCENES!! ——— Be Sure To Subscribe to Studio C ► https://goo.gl/ppFsJP Bring on the laughs!

Space Pr0n of the Week: M13 – The Great Globular Cluster – I have always found globular clusters to be interesting objects. While open clusters are nice to find in the telescope, these are far more mesmerizing. They are like galactic cores just floating out in space, jam packed with stars. That is especially true in their centers; in the center of this one you can find up to 100 stars within a 3 square light year space.