“Woe unto them that call evil good, and good evil; that put darkness for light, and light for darkness; that put bitter for sweet, and sweet for bitter!” – Isaiah v. 20

As was mentioned previously, President Donald John Trump is The Best President in my Lifetime. This, however, is not the sole reason, nor even the primary reason I will not cast a vote for Former vice-President of the United States of America, one Joseph Robinette “Joe” Biden. If there is a government official, former or current, that is as evil, depraved, wretched, and corrupt as Joe Biden, I have yet to meet nor see him. Yet, even this is not the primary reason I cannot cast a vote in favor of Joe Biden…even if he was running for Rapid City Dog Catcher.

IT’S THE COMPANY YOU KEEP. We’ve likely seen the old New York Life Insurance ads: “It’s the Company You Keep.” Nothing has been truer in the political career of Joe Biden. He has kept company, especially in the more recent decades, with some of he most corrupt government officials ever to have been elected and/or appointed to office. After several attempts to gain the White House in the 1970s and `80s, Joseph Biden was finally tabbed to be the running mate of then-senatotr and Democratic Nominee for President of the USA, Barack Hussain Obama of Kenya-Indonesia-Hawaii-Illinois. Despite their collective promise to be “the most transparent administration in history”, the Presidential Administrations of Barack Obama’s eight years, and Mr. Biden’s similar number of years as Vice-President, proved to be the most corrupt, most scandal-plagued, and the most rotten presidential administrations to ever grace Washington, DC. In their collective re-election run in 2012, both Mr. Obama and Mr. Biden ran campaigns and dealt in their respective presidential and vice-presidential debates entirely upon negativity. Never once was there one admission of the administrative failures of both Obama and Biden in their first four years; nothing has been mentioned of that continued failure, 2013-17. Despite being given the golden opportunity to restart a (manufactured) sluggish economy, with control of both Houses of Congress, 2009-11, the Obama-Biden ticket only added to the USA’s economic woes, right up until President Trump’s inauguration in January of 2017.

STRENGTHENING OF EVIL – If any politician alive today has done more to advance evil in the United States of America, he or she cannot touch the record of Joe Biden. From the unethical incarceration of blacks, to the opposition of busing, to the strengthening of Infanticide, to the recognition of the abomination of sodomy being recognized as “natural”, “normal”, and to be embraced by everyone”, Joe Biden has led the charge. It was then-Senator Joe Biden who made an absolute mockery of the Supreme Court Nomination Hearings of the late Appellate Judge and Titan of a Legal Mind Robert Bork…

“Stage management was a key part of this made-for-tv political drama, and one of the central cast members was the Senate Judiciary Committee Chairman, Delaware Senator Joe Biden. His former staffers later admitted that chairman Biden hatched a plan to work with outside advocacy groups to heighten the visibility of the Bork hearings. Biden thought a Supreme Court fight could be a key lever to boosting his name recognition in advance of the 1988 Democratic primary.” [source]

Mr. Biden, as well, has continuously demanded and called for support of infanticide, especially via the Liberal Schutzstaffel, Planned Parenthood. He has stood as a staunch defender of sodomy and sexual depravity. In essence, nothing of the traditional, Christian values that the USA has classically stood for, and of which President Trump has been an ardent defender, has Joe Biden undertaken to defend. He has aided and abetted the enemies of the USA, and mocked our allies to their very faces.

FAILURE TO DENOUNCE THE VIOLENCE OF ANTIFA AND BLACK LIVES MATTER – Time and again, the Fake News Media has demanded that President Trump denounce white supremist groups; time and again, President Trump has delivered. Yet, never once has the flip side of the coin been demanded of Joe Biden (nor his running mate, California Senator Kamala Harris): not once at any time in the past until now has Mr. Biden been demanded of by the Mainstream Media to denounce and cut ties with Black Lives Matter nor AntiFa. As we have seen, time and again since the death of George Floyd, AntiFa and Black Lives Matter criminals have looted, destroyed, burned, damaged, and defaced – not to mention, have assaulted and murdered innocent people – everything in their path, literally burning buildings which were meant to help the very people for which they claim to defend. Statues of even Pro-Abolitionists, like President Abraham Lincoln, have been pulled down to satiate the hatred of these leftist groups. While President Trump has denounced both black and white supremist groups, the silence from the Biden-Harris Campaign has been deafening. The Bible has a clear warning about this; a clear message tot hose who have the power to stop evil, yet do nothing in its face…

“When I say unto the wicked, ‘Thou shalt surely die;’ and thou givest him not warning, nor speakest to warn the wicked from his wicked way, to save his life; the same wicked man shall die in his iniquity; but his blood will I require at thine hand.” – Ezekiel iii. 18

“When I say unto the wicked, ‘O wicked man, thou shalt surely die;’ if thou dost not speak to warn the wicked from his way, that wicked man shall die in his iniquity; but his blood will I require at thine hand.” – Ezekiel xxxiii. 8

“If thou forbear to deliver them that are drawn unto death, and those that are ready to be slain; If thou sayest, ‘Behold, we knew it not;’ doth not he that pondereth the heart consider it? and he that keepeth thy soul, doth not he know it? and shall not he render to every man according to his works?” – Proverbs xxiv. 11-12

If Mr. Biden hasn’t done this directly in his nearly fifty years in public office, his policies have certainly done so.

FOR A BISHOP MUST BE BLAMELESS – We see that someone who oversees others must be blameless. Admittedly, President Trump certainly hasn’t had a life of purity (but, aside from Jesus the Messiah, who has?); President Trump’s first term certainly has been one of purity and blamelessness. Despite the attempts to accuse him of impeachable offenses, tie him to malfeasance with the Russians and Ukrainians, President Trump has been found innocent every time. The same cannot be said of Mr. Biden. The former Vice-President has not only been tied to each and everyone of President Obama’s scandals, he has also been involved in more than a few himself, from denigrating blacks, to heightening his personal and family wealth by way of nefarious means and underhanded ways. Here, too, is an interesting passage…

“If any be blameless, the husband of one wife, having faithful children not accused of riot or unruly.” – Titus i. 6

While the children of President Trump have proven themselves upstanding citizens, and capable leaders of their Dad’s business enterprises, Hunter Biden – the second son of the Democratic Presidential Nominee – has proven himself to be not only quite depraved in his personal life, but underhanded himself in his so-called business dealings. While much of mainstream media has declared such charges of criminal activity by Mr. Biden’s son to be “conspiracy theories” [source], many news outlets have continued to publish stories about Hunter Biden’s personal and social life, as has been found on his computer’s hard drive.[source, 2, 3, 4, 5]

THE BOTTOM LINE: JOE BIDEN IS UNFIT FOR PRESIDENTIAL SERVICE. The reason for this are myriad, and much does have to do with his mental capacities. The real reason, however, that Joe Biden is unfit and unqualified for the Highest Elected Office in the USA (if not the world) is simply because he is a moral failure. In his fifty years of public office, he has not only shown avid and vibrant support for sin in all its forms, he has also called for the defunding of the police departments of major cities’ police forces. Further, Vice-President Biden has failed, time and again, to fully denounce, distance himself and his campaign, and formally cut ties with Black Lives Matter, AntiFa, and NFAC (the “armed” wing of Black Lives Matter) and their collective violence. He has stood against the Truth for so long, it is very likely that Mr. Biden no longer knows what the Truth is. He has proven this to be so in all of the debates in which he has participated, both in the current election cycle, and in the past. Simply put, Joe Biden is unqualified and unfit for service in the Office of President of the United States of America.

CONCLUSION: A VOTE FOR BIDEN IS A VOTE FOR THE DEVIL; A VOTE FOR THE DESTRUCTION OF THE USA. What was begun under Bill Clinton and strengthened under Barack Obama will be completed and finished under a Biden Presidency: that is the destruction of the USA. Along with promising time and again to end fossil fuel exploration, use, and research, Mr. Biden has promised to end fracking, and to reimplement the Paris Accords and the Iran Nuclear Deal, both of which make the USA dependent and subservient to the rest of the world. And if this wasn’t all bad enough, Mr. Biden has promised to heighten the killing and murder of the unborn; stated that he will continue to champion the special “rights” of deviant lifestyles; and will walk away from all the good that President Trump has done. Mr. Biden has promised to allow children as young as eight years old to decide their sexual orientation, regardless of biology, medicine, and science. He has further shown himself a threat to Christian Values in the USA. Simply put, friends, a vote for Biden is a vote for the Devil, plain and simple. As stated before, this election shows us the choices, and they couldn’t be starker. It’s a choice between law and order, or race-baited chaos; between traditional American values, or globalism and the destruction of mores we hold dear; between, simply stated, good and evil. The choice is ours on November 3rd, 2020. This author, for one, cannot, and will not, cast a vote for Joe Biden.

PRAYER: Heavenly Father, will you lead us this presidential cycle? We know, O LORD, that leaders of nations are not only ordained of Thee, but are given as just desserts for our individual and national actions. Will you help us, O Father, to make the right choice the GODLY Choice, the Choice of Good over the choice of Evil? We pray for the salvation of both Joe Biden and Kamala Harris and all of their families. Would you also lead and guide and save the families of President Trump and Vice-President Pence? And will you heal our divisions and heal our land, O LORD? We pray all of this in the Mighty, Matchless Name of Jesus the Messiah, Amen!

THE LAST WORD: “For there are many unruly and vain talkers and deceivers, specially they of the circumcision: Whose mouths must be stopped, who subvert whole houses, teaching things which they ought not, for filthy lucre’s sake.” – Titus i. 10-11 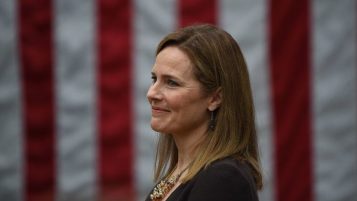