Gotta love the @VP at the Biden Beach Bash '16 pic.twitter.com/Z9gdC6Cmi1

Steve Scully, who serves as a host for C-SPAN’s “Washington Journal,” interned for Biden after coming to Washington, D.C. as a student, according to Marie Claire. He later worked as a staff assistant for the late Sen. Ted Kennedy, D-Mass., a Democratic icon who was honored at the party’s 2012 convention.

On Thursday, one of his tweets resurfaced containing a photo of him with Biden. “Gotta love the @VP at the Biden Beach Bash ’16,” it read.

C-SPAN and The Commission on Presidential Debates did not immediately respond to Fox News’ request for comment.

He also previously tweeted a New York Times op-ed titled, “No, Not Trump, Not Ever.” In it, the Times’ David Brooks concludes: “Trump’s supporters deserve respect. They are left out of this economy. But Trump himself? No, not Trump, not ever.”

Scully’s past provoked criticism from some and concerns about potential bias at the debate, which is scheduled for Oct. 15.  “How is this even possible?” Dan Gainor, vice president of the conservative Media Research Center, asked Fox News. “When they picked the moderator did they try to ensure that it would be biased to benefit Biden? This is the equivalent of giving the Democrats home-field advantage.”

At the beginning of September, Scully did an interview in which he committed to being fair “across the board.” He said his training as a backup moderator in 2016 helped him prepare for his role this election. Scully’s debate will be a townhall format at the Center for the Performing Arts in Miami, Florida.

“The town hall meeting is unique because it’s really more of a facilitator role, but to listen carefully, to follow up, to make sure that the president, that Joe Biden … follow the rules, that they don’t filibuster,” he said. “And my hope really is that we’re going to ask very direct questions, and we’re going to push for very direct answers, and to make sure it’s fair across the board.”

After graduating from American University, Scully received his master’s degree in journalism from Northwestern University’s Medill School of Journalism in 1985.

According to his George Washington University bio, Scully has spent decades at C-SPAN, managing election coverage since 1992. The program he anchors on Sundays features interviews with high-profile interviews while taking calls from viewers across the political spectrum.

The commission that oversees the general election presidential debates said Wednesday it will be making changes to the format of the remaining two debates. One key change it plans to implement: Cutting off the microphones of President Trump and Joe Biden if they break the rules, according to a source familiar with the commission’s deliberations. The plans have not been finalized and the commission is still considering how it would carry out the plan.

Talk about stacking the deck.

Gentle readers, if you believe that Joe Biden’s Former Intern will willingly cut off the mic of his former boss in the middle of a Presidential Debate, I have two bridges over the Mississippi River at Memphis, Tennessee to sell you.

The first Debate Moderator, Fox News’ Chris Wallace was horribly biased and a Never-Trumper to begin with, like Steve Scully is.

His anti-Trump bias stood out like Ilhan Omar in a synagogue.

No matter what you heard yesterday on the Fox News Channel, Wallace was simply awful.

The President was exactly right when he quipped that night that he was debating Chris Wallace, also.

Even if the Debate Commission does not go through with their plans to cut off the mics, the President will still be in another 2-on-1 handicap match in the next debate.

The Fox News article above features a quote from a 2016 New York Times article written by David Brooks.

Donald Trump is an affront to basic standards of honesty, virtue and citizenship. He pollutes the atmosphere in which our children are raised. He has already shredded the unspoken rules of political civility that make conversation possible. In his savage regime, public life is just a dog-eat-dog war of all against all.

As the founders would have understood, he is a threat to the long and glorious experiment of American self-government. He is precisely the kind of scapegoating, promise-making, fear-driving and deceiving demagogue they feared.

So, a “broadcast journalist” who tweets a link to an article filled with hatred and vitriol as seen in the quote above proclaims that he will be an “unbiased” Moderator in the second Presidential Debate?

And, AOC is a genius. 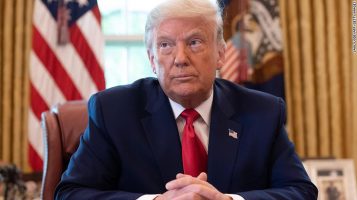