We're praying for you @realDonaldTrump! 🙏 pic.twitter.com/iIaBpc84Va

President Trump supporters lined up in front of Walter Reed Hospital Saturday evening, to show support for Trump who was recently diagnosed with coronavirus.

Dozens of people gathered for an event hosted by ‘Women for America First’, with Trump 2020 signs for a prayer vigil Saturday night.

President Trump was admitted to Walter Reed Friday after he announced that he and the First Lady had tested positive for the coronavirus.

Trump was later sent to the hospital and placed on oxygen, but White House physician Dr. Sean Conley assured the public he was “extremely happy with the progress” the president was making.

Though a senior administration official told Fox News that, “Early indications are for an extremely good prognosis – but the next 48 hours will be critical.”

Amy Kramer, the founder of the hosting organization, encouraged people that could not attend the candle-light pray vigil Saturday night, to “Light a candle in your home and pray,” in a tweet.

Trump has received two doses of Remdesivir so far, an anti-viral drug that has been approved by the FDA to help treat the coronavirus.

“If you look at the therapeutics which I’m taking right now some of them and others that are coming out soon that are looking like, frankly they’re miracles,” Trump said in a video posted to his Twitter Saturday night.

“I don’t know the next period of a few days, I guess — that’s the real test so we’ll be seeing what happened over those next couple of days,” he added.

Questions regarding Trump’s ability to continue campaigning in the lead up to the election, just weeks away, have surfaced.

And congressional Democrats have used the president’s illness to suggest delaying the confirmation hearings of Trump’s Supreme Court nominee, Amy Coney Barrett – though GOP senators have said Trump’s diagnosis will not slow down any congressional procedures.

But both Republicans and Democrats have voiced their support and well wishes for a “speedy recovery” on Twitter.

The social media platform was quick to address negative tweets voicing support for the president succumbing to the virus that has already killed more than 209,000 Americans and infected over 7.3 million in the U.S.

“Tweets that wish or hope for death, serious bodily harm or fatal disease against anyone are not allowed and will need to be removed,” a Twitter spokesperson posted following the announcement that the president had been submitted to the hospital.

I can remember the day when President John F. Kennedy was assassinated.

I was in the first grade.

The teacher, in her mourning, had us write in our Big Chief Tablets that President Kennedy was dead and that Johnson was now President.

Times have changed…and not for the better.

Ever since America found out that President Trump and First Lady Melania Trump has contracted COVID-19, Americans’ reactions to the news have been as divided as our country.

Those in the Main Stream and Social Media on the left side of the Political Spectrum seemed to be positively gleeful that the President was taken ill, making suppositions as to and plans for the possible future ascension of SPeaker Nancy Pelosi to the Presidency.

However, the majority of average Americans, like myself and those who gathering outside Walter Reed Hospital, have been praying for the President and the First Lady.

Every night before I go to sleep, as I ask my Creator to bestow His Grace and Blessings upon my family and friends, I also pray for my country, Vice-President Pence and President Trump.

There are several reasons why I believe that the man and the office which he holds both need and deserve my prayers.

Donald J. Trump did not need the job of President of the United States of America.

He was a successful billionaire businessman and entrepreneur.

He ran for and won the presidency because of his love for America and her people.

Donald J. Trump was elected the 45th President of the United States of America on November 8, 2016 with 46% of the vote.

Three months from the end of the first term of the Presidency of Donald J. Trump, the gaping maw that is America’s Political Division is more cavernous as ever.

While the News Organizations and Political Pundits who inhabit the never-ending metropolitan areas of the East and Left Coasts and the “Beltway” insist, as “some old Lib” named Phil Donahue did July before last, that,

This is the darkest political moment in American History.

Those of us who live in America’s Heartland, between the coasts, continue to support the man whom we elected to the most powerful office in the Free World…because he is not a politician.

Average Americans do not care what Main Stream Media “journalists” and their masters in the Far Left Democratic Party think.

The Democrats became the party of the “Upper Crust” and Special Interest Groups who look down their noses at Americans who live here in “Flyover Country”.

The Democrats assumed, after reading their own press clippings, that all Americans wanted in 2016 and somehow, still want, is the Progressive/Marxist Political Ideology and style of governance which Barack Hussein Obama practiced during his time as President.

If the Democrats on Capitol Hill believe that average Americans between the coasts will support the Impeachment of a President who has brought jobs and a booming economy back to America, they are sadly mistaken.

During my 61 years on God’s green Earth, I have never, EVER seen a President of the United States so relentlessly assaulted on a daily basis like Donald J. Trump has been.

And yet, he has flourished and fulfilled many of his Campaign Promises.

To some who will read this post, Trump’s success will remain inexplicable.

To those of us who share the Faith of Our Fathers, no explanation is necessary.

That is why I will join a multitude of my fellow Americans today in continuing to pray for President Donald J. Trump to continue healing from the Chinese Coronavirus so that he might remain our President and finish the job he has begun. 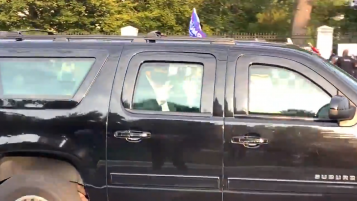