Anyone who votes for Joe Biden after this Bobulinski interview on Tucker is willingly voting to support a man who sold our country out to China for personal profit.

During an interview aired on Tuesday’s broadcast of the Fox News Channel’s “Tucker Carlson Tonight,” former Hunter Biden business associate Tony Bobulinski discussed his meeting with 2020 Democratic presidential nominee former Vice President Joe Biden at the Beverly Hilton and said there was “no other reason” for him to meet with Biden “than to discuss what I was doing with his family’s name and the Chinese,” and that it is “a blatant lie” for Joe Biden to declare he didn’t know about his son, Hunter’s, business dealings.

Bobulinski said, “There was no other reason for me to be in that bar meeting Joe Biden than to discuss what I was doing with his family’s name and the Chinese, CEFC.”

Bobulinski added that Joe Biden’s claim that he didn’t know about his son’s business dealings is “a blatant lie.”

He also stated, “Hunter introduced me as, this is Tony, dad, the individual I told you about that’s helping us with the business that we’re working on and the Chinese.” And that it was “crystal clear” that Hunter Biden had told his father about his business dealings.

And, what was the business that they were working on with the Chinese?

Hunter Biden, the son of former Vice President Joe Biden, allegedly acted as the “personal attorney” for Ye Jianming, the chair of a major Chinese energy firm, in a deal to buy a 14% stake in a Russian state oil company facing U.S. sanctions.

The stunning accusation was made by Tony Bobulinski, a former business partner of the Biden family, during an interview Tuesday evening with Tucker Carlson on Fox News.

Bobulinski explained that he was to have been the CEO of a new firm, Sinohawk, that was to be a joint venture between CEFC — the “capitalistic side of the Chinese government” — and the Biden family. He said he met with Joe Biden in 2017 to discuss the arrangement, contradicting Biden’s denials on the campaign trail.

However, the deal fell through, he explained, partly because CEFC tried to buy a 14% stake in Rosneft, the Russian state oil company. At that time, Russia faced sanctions because of its invasion of Ukraine and seizure of Crimea in 2014. The Financial Times reported that the CEFC deal was to help Rosneft find new markets “as relations deteriorate with the west.”

That deal, too, eventually fell through, as CEFC was investigated for corruption by China and other countries as well.

In September 2017, once CEFC had announced the deal to buy a stake in Rosneft, and the $10 million that CEFC was supposed to have invested in Sinohawk had never materialized, Bobulinski grew more concerned.

In October, he said, “I did reach out to Hunter Biden … asking him, ‘Hey, listen, they haven’t funded the $10 million, have you done something that I’m not aware of? Have you gone around us? Have you started a parallel discussion with Chairman Ye that I should be conscious of?”

Bobulinski said that Hunter Biden informed him, via text message, “I’m acting as the personal attorney to Chairman Ye.”

“Hunter Biden is now telling me,” Bobulinksi recalled, “that he’s meeting personally, one-on-one with Chairman Ye in his $50 million penthouse in New York, and if he can’t meet him, he’s picking up the phone and calling him, but they only discuss things in person.

“You can imagine my frustration,” Bobulinski said. “You’re acting as the personal attorney to Chairman Ye while they’re tendering for 14% of the Russian state-owned energy company, a deal valued at $9 billion? What am I missing here?”

Hunter Biden is reportedly licensed to practice law in the state of Connecticut.

So, boys and girls, wrap your heads around this:

Joe and Hunter Biden are guilty of the very thing that President Donald J. Trump was investigated for by a Special Counsel, his minions, and Nancy Pelosi and the Democrats in the House of Representatives: COLLUSION!

Joe Biden has been lying to American voters concerning his involvement with his son’s nefarious foreign deals, which makes him a security risk to our Sovereign Nation who should never have been able to run for President of the United States of America.

To say that Sleepy Joe is compromised is putting it mildly.

He and his heathen son are both as crooked as a dog’s hind leg.

Another thing, Special Counsel Robert Mueller was chosen in May of 2017.

His investigation was underway while the Biden Crime Family was brokering deals for personal gain with our two biggest enemies.

Given the fact that this Father and Son enterprise had been in “business” since Biden was Vice-President, and that several prominent Democrats were on lists to be contacted by the Bidens about certain endeavors,it sheds a whole new light on the sham impeachment of President Trump.

Were the Democrats attempting to cover their own dealings with the Biden Crime Family?

Action needs to be taken by the Department of Justice.

Joe Biden needs to withdraw from the race immediately.

Calling the Democrat Elite a bunch of hypocrites does not even begin to cover the depth of their corruption. 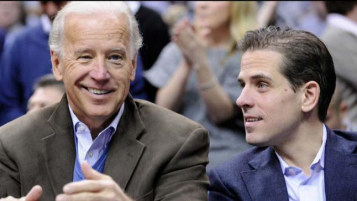