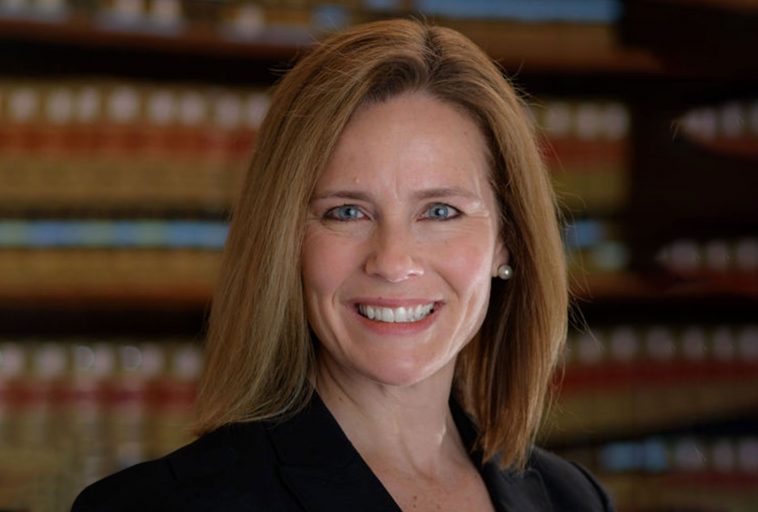 The courage it takes someone to accept a Supreme Court nomination from President Trump, knowing what the media and other partisans will do in an attempt to destroy you, your life, your family … is just staggering to contemplate.

Amy Coney Barrett, a judge on the U.S. Court of Appeals of the 7th Circuit, is reportedly one of the top contenders for President Trump’s nomination to the seat vacated by the death of late Supreme Court Justice Ruth Bader Ginsburg.

Ginsburg was the face of the liberal bloc on the Supreme Court, meaning that an appointment by Trump and confirmation by the Republican-controlled Senate could potentially significantly shift the ideological balance of the court for years. Barrett’s record, including cases she’s ruled on during her time as an appeals judge and her scholarship as a law professor at Notre Dame, are set to be intensely scrutinized by the media and the Senate Judiciary Committee should Trump choose her.

Carrie Severino, the president of the conservative Judicial Crisis Network, said that Barrett and the other women on the Trump shortlist may disagree with Ginsburg on the issues, but have the intellectual firepower to fill in for the late legal luminary.

“These are really impressive women,” Severino said. “They’re worthy of following in her footsteps.”

Those on the left, however, have said they worry that Barrett would undo precedents like Roe v. Wade and impose her faith on others.

Here are a handful of the notable stances Barrett has taken that might indicate the effect she could have on the Supreme Court’s jurisprudence.

Perhaps the most high-profile opinion Barrett has written is a dissent in Kanter v. Barr, a case that upheld a Wisconsin law taking gun rights away from non-violent felons. The majority opinion was written by Judges Joel Flaum and Kenneth Ripple, who were appointed by President Ronald Reagan.

“History is consistent with common sense: it demonstrates that legislatures have the power to prohibit dangerous people from possessing guns,” Barrett wrote. “But that power extends only to people who are dangerous.”

She added: “[W]hile both Wisconsin and the United States have an unquestionably strong interest in protecting the public from gun violence, they have failed to show, by either logic or data … that disarming Kanter substantially advances that interest. On this record, holding that the ban is constitutional as applied to Kanter does not ‘put[] the government through its paces’ … but instead treats the Second Amendment as a ‘second-class right, subject to an entirely different body of rules than the other Bill of Rights guarantees.'”

Barrett wrote the majority opinion in the case Doe v. Purdue, a due process and Title IX challenge by a Purdue University student who had been accused of sexual assault, which led to the student losing his Navy ROTC scholarship.

The students in the case were identified as John Doe and Jane Doe to preserve their anonymity. Jane alleged that John had woken her up while they were sleeping together by groping her over her clothes and admitted to her that he had “digitally penetrated” her while she was asleep on a different occasion. John denied all the accusations to the school.

According to Barrett’s opinion, Purdue then allegedly wrote a report that “falsely claimed that [John] had confessed to Jane’s allegations;” refused to let John see evidence in the case; did not allow him to present witnesses; did not let him cross-examine Jane; and later “found him guilty by a preponderance of the evidence of sexual violence.”

The case was dismissed by a lower court, and Barrett was considering whether the claims on their face merited such a quick dismissal or whether the appeals court should order a closer look at the proceedings.

In the case Rainsberger v. Benner, Barrett authored an opinion in which she denied qualified immunity — a protection for government officials from being sued for judgment calls they make on the job — for a police officer who was alleged to have submitted a document “riddled with lies and undercut by the omission of exculpatory evidence” that led to a man being put in jail for two months.

Qualified immunity has been a hot topic in recent months as police come under increasing scrutiny for alleged misdeeds on the job, whether that be police brutality or lying on documents as Benner was accused of. Sen. Mike Braun, R-Ind., briefly pushed a bill to scale back qualified immunity for police earlier this summer — an idea that was widely supported by Democrats.

Barrett has been involved with a handful of cases that implicated abortion 7th Circuit. In one 2018 case she dissented from a denial of en banc rehearing — meaning she wanted the entire court to reexamine a decision by three judges — after the 7th Circuit ruled unconstitutional an Indiana law banning abortions for reasons relating to the sex, race or potential disability of the fetus. The law also banned fetuses from being disposed of as medical waste.

Barrett joined a dissent by Judge Frank Easterbrook that labeled the ban on abortions for sex, race and disability reasons “the eugenics statute” and argued the Supreme Court had never ruled on such a law so it should not be automatically considered illegitimate.

Barrett has for the most part sided with the Trump administration on immigration cases. In Cook County v. Wolf, a case on the Trump administration’s controversial “public charge” rule allowed immigrants who were likely to use welfare to be barred from getting visas, Barrett said the rule was a “policy choice,” that should not be resolved in litigation.

In Yafai v. Pompeo, Barrett backed a State Department decision to deny a visa to the wife of an American citizen for allegedly trying to smuggle in children, despite the fact that the parents said their children had died in a drowning accident. The decision was reconsidered but the wife was still not given a visa.

Barrett said that the fact the denial was reconsidered, under the law and Supreme Court precedent, fulfilled the legal requirements the State Department had to meet. In a decision on whether or not the full court should rehear the case, she said that the State Department was given significant discretion and that the appeals court could not require more evidence than a simple citation of what law the decision was made under.

Barrett spent a long time in academia, primarily as a professor at Notre Dame, which is her alma mater. She co-authored an article called “Catholic Judges in Capital Cases,” which examines the competing obligations of Catholics when asked to rule in a death penalty case. It suggested there might be some instances in which a Catholic judge should recuse himself or herself from such proceedings.

“Catholic judges must answer some complex moral and legal questions in deciding whether to sit in death penalty cases. Sometimes (as with direct appeals of death sentences) the right answers are not obvious. But in a system that effectively leaves the decision up to the judge, these are questions that responsible Catholics must consider seriously,” she wrote along with John H. Garvey, who is now the president of the Catholic University of America in Washington, D.C.

“Judges cannot — nor should they try to — align our legal system with the Church’s moral teaching whenever the two diverge,” the article says. “They should, however, conform their own behavior to the Church’s standard. Perhaps their good example will have some effect.”

Ever since Justice Ruth Bader Ginsburg passed away, the Far Left Democratic Party has been protesting the fact that Trump gets to pick her successor and attempting to force him to wait until after the 2020 Presidential Election and the inauguration of the next President.

Of course, the Dems and the Never-Trumpers, all Nattering Nabobs of Negativity, knew whom the President was going to pick…and they had already made up their minds about her.

They knew that…shudder…President Trump was going to pick someone who was a Christian and who was unashamed of their faith.

And, of course, Trump did.

Christians still make up 75% of America’s population, so odds were that Trump’s nominee would believe in the Triune God.

And, that’s a good thing.

Here is what he said about the role of Christianity in our government, which remains in sharp contrast to the Rewritten History and wish-casting of the “Democratic Socialists” whose heads are exploding even as we speak.

Those who wrote the Constitution believed that morality was essential to the well-being of society and that encouragement of religion was the best way to foster morality. The fact that the Founding Fathers believed devotedly that there was a God and that the unalienable rights of man were rooted in Him is clearly evidenced in their writings, from the Mayflower Compact to the Constitution itself…

President Washington opened his Presidency with a prayer, and reminded his fellow citizens at the conclusion of it that “reason and experience both forbid us to expect that National morality can prevail in exclusion of religious principle.” President John Adams wrote to the Massachusetts Militia, “we have no government armed with power capable of contending with human passions unbridled by morality and religion… Our Constitution was made only for a moral and religious people. It is wholly inadequate to the government of any other.”

After going on to quote similar sentiments from Thomas Jefferson and James Madison, Scalia continued:

Nor have the views of our people on this matter significantly changed. Presidents continue to conclude the Presidential oath with the words “so help me God.” Our legislatures, state and national, continue to open their sessions with prayer led by official chaplains. The sessions of this Court continue to open with the prayer “God save the United States and this Honorable Court.” Invocation of the Almighty by our public figures, at all levels of government, remains commonplace. Our coinage bears the motto, “In God We Trust.” And our Pledge of Allegiance contains the acknowledgment that we are a Nation “under God.” As one of our Supreme Court opinions rightly observed, “We are a religious people whose institutions presuppose a Supreme Being.”

With all of this reality (and much more) staring it in the face, how can the Court possibly assert that “the First Amendment mandates governmental neutrality between… religion and nonreligion,” and that “[m]anifesting a purpose to favor… adherence to religion generally,” is unconstitutional? Who says so? Surely not the words of the Constitution. Surely not the history and traditions that reflect our society’s constant understanding of those words.

While the ever-increasing turn toward Marxism and the constant protesting and threatened violence by the New Bolsheviks of the Democratic Party, is very troubling, I find solace in the fact that they are still a minority in this country.

In my opinion, today, President Trump will pick ANOTHER winner.