Most of my family and friends grew up in a small town in the south.  A place where almost everyone was proud to call themselves a democrat. Many still do. It was a Mayberry like community where parents worked to provide for the families, children roamed free in the neighborhood, and everyone gathered for worship on Sunday mornings.

Our parents and grandparents were witness to the Great Depression and WWII. They found comfort in the steadfast wartime leadership of FDR. Many of them survived the depression with help from his WPA programs that put America to work and if they didn’t, they knew people who received aid from programs like those that provided assistance to the widows of the war.  And then, Harry Truman had the courage to drop a bomb and end the war.  It was a nice run for the democrats, who had only elected 2 presidents from 1860 to 1932.  But also, a departure from their early roots of being for the common man and individual rights.  It was a shift from government as a protector to government as a provider with the people being put to work in government created jobs or receiving federal financial assistance.

We will never know where JFK would have ended up with his list of presidential accomplishments, but in his brief time in office, he started with great promise, going toe to toe with Soviet Union, taking on organized crime, setting lofty goals for our country, cranking up the economy with tax cuts, and starting the march to the Civil Rights Act.  While claiming to be for the working man, he continued and increased welfare programs with expanded unemployment, greater use of food banks, and food stamps…programs which always buy a few votes.  These were good times for Democrats and families like ours.   JFK’s early success and his assassination gave ample reason for support of the Democrat Party.

But then came the Nixon impeachment. The Democrats who never seem to learn from defeat and instead of looking at their message, their failed leadership, or a flawed candidate that led to a defeat, they move to be the party of obstruction and fight to destroy their enemies.  They used the Nixon impeachment to push into office, a southern gentleman who appeared to be one of the most honest politicians ever.  But Jimmy Carter’s lack of leadership and even lesser choice of appointees, crashed the country with record speed.  The devotion of the average democrat was never more evident than when they chose not to replace Jimmy Carter as a second term candidate.  He was overcome with failure, but they attempted to prop him up, by peddling lies and slandering the opponent.

Bill Clinton was the last of the conservative southern democrats to rise to leadership.  But he was not elected on his boyish southern charm, the depth of his political success or the strength of the Democrat Party.  After Jimmy Carter’s failure, and 12 years of obstruction they could not overcome Reagan’s communication skills and his political successes, the democrats were struggling.  It took the funny business of a 3rd party Ross Perot and his big business allies to divide the conservative vote and put Clinton into the Whitehouse with only 43% of the popular vote.  Looking at a laundry list of questionable political deals and sexual misconduct from the Clinton’s tenure in Arkansas politics, the republicans could not resist taking a page from the democrat’s obstructionist playbook and it became a tumultuous 8 years.   But Bill’s presidency benefited from the fall of the Soviet Union and he worked with the republican congress to have some success.  After 8 years, the republican’s obstruction overshadowed their successful “Contract with America” campaign, and Bill with many of his misgivings ignored by the media improved the democrat brand among their followers.

But after Al Gore’s loss, conservative southern democrats became all but extinct and there are not enough moderates with a backbone left to affect the course of the party.  The Democrat Party has been the party of special interest groups and special rights for decades, but now they no longer give the moderate democrats and working-class the attention that they give to even their smallest of special interest groups.  The party made a hard shift away from working for the common man, to a divide and conquer strategy that pits one group against another while attempting to give something to everyone.  How could they even begin to hold a consensus together from an organization of such a disparate group.  The conflicts are as evident as their desperation.

The democrats have not elected a president based on the party platform and political beliefs since JFK.  Yet, for the last two decades, most of the democrat leadership has managed to hang onto power regardless of their failures in office and their defeats in elections.  Leadership mistook Barak Obama’s election to be a validation of their new party platform when it was little more than a media driven feel-good social moment for the country.  And while the country put great hope in his election, his presidency took a feel-good moment and turned it into a nightmare which continues to haunt the country and the Democrat Party.  Their new reaction to every issue starts with hysteria and hyperbole.  Just look at the new Supreme Court vacancy.  The leadership seems to know they represent an unpopular ideology and a dying party with future prospects of victory looking ever more grim.  In their hysteria and dreams of regaining power, they talk of stacking the court with additional members and adding states to tilt the balance of power away from the current majority.  A majority who are rejecting the new direction of the democrats and AOC’s mythical utopia.

As I said at the beginning of this article, most of my family and friends were lifelong democrats, and many of them still are, but I just do not understand why.  The democrats once upon a time did some good things to earn their support…decades ago.   But, under the leadership of the likes of Nancy Pelosi and Chuck Schumer, the party has become increasing hostile not only to moderate democrats but to the working class.  Their party benefactors are a who’s who list of modern-day James Bond villains.  They are an elite group leading some of our country’s largest corporate conglomerates who have no regard for the collateral damage wreaked on the American people in their quest for power and domination.  And then there are the George Soros’s of the party and his benefactors who overtly want to burn it all down.  But it is the Democrat Party that needs to be dismantled to its foundation and rebuilt. 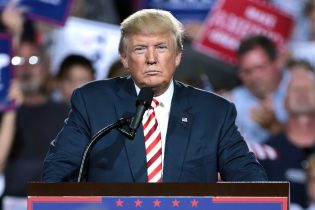