Two police officers were shot in Louisville, Ky., Wednesday night as protesters flocked to the streets to rally against the death of Breonna Taylor, authorities said.

The officers’ conditions were not immediately released and it was unclear whether the protests played a role in their shootings.

Demonstrators turned out in droves hours after a grand jury handed down charges against one of three officers involved in the incident inside Taylor’s apartment, and none involved Taylor’s death.

The local branch of the FBI said on Twitter that its SWAT team responded to an officer shooting and was assisting in the investigation.

A grand jury earlier in the day indicted one of the three officers who took part in the botched drug operation in her apartment targeting a man who did not live there and who was already in custody.

The charges against former LMPD member Brett Hankison were for recklessly firing stray bullets that found their way into a neighboring family’s home. He was fired in June.

“It’s yet another example of no accountability for the genocide of persons of color by white police officers,” he said in a joint statement with co-counsels Sam Aguiar and Lonita Baker. “With all we know about Breonna Taylor’s killing, how could a fair and just system result in today’s decision?”

Protesters shouted slogans like “No justice, no peace” and criticized the charges in connection with Taylor’s death.

…TownHall reporter Julio Rosas shared video to Twitter that he said showed people trying to set fire to the courthouse’s boarded up windows.

Demonstrators were marching in other cities around the country, too, including New York, Chicago, Atlanta and Washington, D.C.

Taylor was shot and killed in the crossfire when her boyfriend, Kenneth Walker, allegedly opened fire on police officers who entered her apartment on March 13, according to Kentucky Attorney General Daniel Cameron. Walker has stated he believed the officers were intruders.

First the Kentucky Attorney General announces no charges for the murder of Breonna Taylor, with a $15,000 bail set for one cop for endangering the lives of her neighbors. Not one of these killer cops is going to jail for storming into Breonna Taylor’s house and murdering her, but the thousands of people protesting are already being shot at, rounded up, and met with force not only from the police but from Trump’s armed violent militias, the same kind of street thugs that murdered two protesters in Kenosha.

The unpunished – and glorified – murder of Black people by police is at the core of the Trump Pence fascist program. Then Trump tells you, straight up, that he will not abide by an election he loses. “Get rid of the ballots and you’ll have a very peaceful … there won’t be a transfer, there’ll be a continuation.”

This cannot stand! We must bring all our fury and determination to bear right now and call people out to the streets and aim for the top. The road to justice for Black Lives runs right through driving these white supremacists out of the White House. Everyone needs to be out on October 3rd to raise this demand and launch the day to day protests and build the ONLY force that can stop this.

This is the strategy that everyone crying out for justice needs to know about, and we are the ones who must bring this to the people now! Go out and tell people what they don’t know yet – that Trump/Pence Out Now is an essential demand if we want justice for Breonna Taylor, and protests every day aimed at driving out this regime is the only way forward now.

Last night, “protests” also “spontaneously” broke out in other cities across the country,

Gentle readers…do you realize what we are witnessing?

As we continue to see the purposeful unraveling of the safeguards which those before us have put in place in order that we might live in a society where we can feel safe to venture from our homes through the defunding of municipal police departments, the cry from the “New Bolsheviks” is becoming louder and more high-pitched to do away with traditional law and order.

Meanwhile, spineless Democrat Governors and Mayors are actually giving them what they want: anarchy.

Why do they want anarchy?

In an article titled “Marx, Theoretician of Anarchism, written by Maximilien Rubel in 1973, and found on Marxists.org, the writer makes the following observation…

Marxism as the ideology of a master class has succeeded in emptying the concepts of socialism and communism, as Marx and his forerunners understood them, of their original meaning and has replaced it with the picture of a reality which is its complete negation. Although closely linked to the other two, a third concept – anarchism – seems however to have escaped this fate of becoming a mystification. But while people know that Marx had very little sympathy for certain anarchists, it is not so generally known that despite this he still shared the anarchist ideal and objectives: the disappearance of the State. It is therefore pertinent to recall that in embracing the cause of working class emancipation, Marx started off in the anarchist tradition rather than in that of socialism or communism; and that, when finally he chose to call himself a “communist,” for him this term did not refer to one of the communist currents which then existed, but rather to a movement of thought and mode of action which had yet to be founded by gathering together all the revolutionary elements which had been inherited from existing doctrines and from the experience of past struggles.

…Marx developed a theory of anarchism; and further, (and) in fact it was he who was the first to provide a rational basis for the anarchist utopia and to put forward a project for achieving it.

For decades now, the Democrats have moved further and further left of the Political Spectrum until, at this point, the Democratic Party is a Far Left political entity, ridiculing, hating, and seeking to destroy America History, traditional faith and values, and, in the process, radically changing our Constitutional Republic into just another failed Democratic Socialist country.

Through the mobilization of “useful Idiots” like Antifa, Black Lives Matter, and Hollywood celebrities, private and political power brokers have “taken advantage of a crisis” to make their move to stoke the fires of anarchy through the use of organized riots in major American cities.

First, they used the death of George Floyd to attack and attempt to eliminate our first line of defense: “The Thin Blue Line”.

Because their efforts to take out President Trump continued to fail, these power brokers decided to follow the example of Vladimir Lenin, the disciple of Karl Marx, and start a revolution at the grass roots level with their own “New Bolsheviks”, the “useful idiots” who I mentioned earlier.

While I do not believe that they will be successful at this time on a national level, if we do not keep a strong American Patriot like President Trump in office, the Democrats’ dream of a Socialist Utopia ushered in through anarchy achieved by fiery rhetoric designed to shame Americans into not standing up to them.

They have already succeeded in having young Americans literally kiss the feet of those whom they have supposedly “offended”.

They even succeeded in causing the cancellation of “Cops” after 32 years on television and “Live P.D.”, a very popular program on A&E.

And now, they are demanding, please excuse the expression, the lynching of Louisville Police Officers who were doing their jobs

It is time for America to stand up for our country…

Before it is gone. 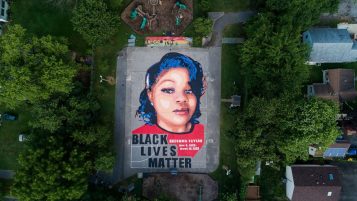