The election-by-mail fraud by Democrats will potentially be a greater threat to our Republic than any outside entity in our history. https://t.co/knwOONoGf8

In an interview with the Chicago Tribune, Attorney General William Barr went after Democrats on a range of issues, including rumors that President Trump would attempt to stay in office if he loses the general election in November.

“You know liberals project,” an uncharacteristically salty Barr said during his Monday interview. “You know the president is going to stay in office and seize power and all that s***? I’ve never heard of that crap. I mean, I’m the attorney general. I would think I would have heard about it.”

Though the focus of the interview was crime and corruption in U.S. cities, particularly in Chicago, Barr also used the opportunity to address several issues that have dominated the news cycle leading up to the presidential election.

“There undoubtedly are many people in the government who surreptitiously work to thwart the administration,” the attorney general told the Chicago Tribune’s John Kass, host of The Chicago Way.

Barr also said the U.S. was approaching a “ruled by the mob” approach to governance.

“Increasingly, the message of the Democrats appears to be ‘Biden or no peace’,” he added.

Barr said he agreed the upcoming election was the “most significant election of a lifetime” — a position taken by both Trump and Democratic presidential nominee Joe Biden.

“As an attorney general, I’m not supposed to get into politics,” Barr told Kass. “But…I think we are getting into a position where we’re going to find ourselves irrevocably committed to a socialist path. And I think if Trump loses this election — that will be the case.”

The conversation diverted to voting rights and the safety of mail-in voting, with the attorney general suggesting that postal workers will be able to be paid off in order to buy the blank ballots that are routinely distributed for presidential elections.

“Just think about the way we vote now,” Barr said. “You have a precinct, your name is on a list, you go in and say who you are, you go behind a curtain, no one is allowed to go in there to influence you, and no one can tell how you voted. All of that is gone with mail-in voting.”

Several states, including Colorado, Hawaii, Oregon, Utah, and Washington, automatically submit mail-in ballots to all state residents for the general election. Due to the coronavirus, over 20 other states have taken measures to ensure citizens can vote by mail rather than at a polling station come November — a measure that the Trump administration has claimed threatens the validity of the voting process.

But Democrats in Congress believe the Trump administration is working to prevent mail-in voting to circumvent voting during the general election, in an attempt to sway the 2020 presidential election results.

Congressional Democrats initiated an investigation following comments made by Trump suggesting he purposefully blocked funding to the U.S. Postal Service to prevent their ability to cope with the expected increase of mail-in ballots as a result of the pandemic.

The House passed a bill that would grant the USPS $25 billion in funding to aid them with the increased mail load through the election. The bill is currently awaiting the Senate’s vote, though the White House has already said they would veto any such bill.

Barr further accused Democrats of purposefully sowing doubt in the minds of Americans as to the validity of the election’s results – a strategy that congressional Democrats have accused the president of attempting.

“They’re creating an incendiary situation where there will be loss of confidence in the vote,” Barr claimed. “It’ll be a close vote. People will say the president just won Nevada. ‘Oh, wait a minute! We just discovered 100,000 ballots! Every vote will be counted!’ Yeah, but we don’t know where these freaking votes came from.”

Why do Democrats keep proposing dumb things like mail-in voting?

Well, it is probably because they do not have a very high opinion of the intelligence of average Americans.

Like the Medicine Shows of the Old West or the old Carnival Sideshows, the Democrats rely on the gullibility of average Americans.

Anyone who has ever received a Christmas Card on the 4th of July knows that the U.S. Mail is famous for is slow delivery and just downright losing letters and packages in transit.

The Democrats, who for the past several decades have said that “Every Vote Counts” , now, all of the sudden, want to place the future of our country in the hands of the United States Postal Service.

Why? Because fraud and deception is what today’s Far Left Democrats, like Marxists who have come before them, are good at.

Since April of 2010, when I began my daily cathartic exercise of chronicling American Politics, Social Issues, and our Culture, I have documented numerous instances of chicanery involving our elections, both local and national, from the rise and fall of ACORN, the corrupt entity responsible for the “ground game” during the 2008 election of Barack Hussein Obama to abnormalities found in the aftermath of his re-election in 2012, where several Democratically controlled counties’ populations voted 100% for “The Lightbringer”.

I know that I have not been alone in noticing the out-of-control voter fraud that has been the rule rather than the exception in recent national elections, and it has been the exclusive stock in trade of the Democratic Party.

Rather than roll over and play dead as the “genteel” Vichy Republicans have in the past, Trump chose to issue an overt warning at the third and final 2016 Presidential Debate that he would be watching the polls on the night of November 8, 2016 for the Political Chicanery that had become second nature to the Modern Far Life Democratic Party.

After the debate, Trump Campaign Manager Kellyanne Conway said of Trump refusing to say whether he would accept the results, “He said he’s going to take a look at the results.”

When Conway was asked if she thought that was responsible for the democracy, she responded, “I think the most responsible thing that Donald Trump has done for democracy, frankly, was to run in the first place.”

“And I credit him tremendously for making that sacrifice, he and his family. Because a lot of people have run in politics, Tom, for fame or fortune or status, prestige. He had all of that,” Conway said. “And he sacrificed a great deal of that to do this. And the greatest gift he’s given to democracy is really to show people who have begged for years to have an outsider to disrupt the system to have somebody just come and turn the tables over completely. He was willing to do it.”

I personally don’t care if the worshipers of the Washingtonian Status Quo on both sides of the Political Aisle were offended by Trump’s reluctance to accept the Election Results at face value in 2016.

And, I don’t care if they are offended that he is still wary of Election Interference by the Democrats and the “Deep State”.

Since I have noticed a lot of Trump yard signs out and very few Biden signs out, I will be wary, too. 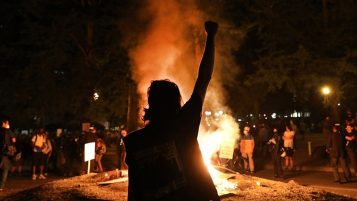