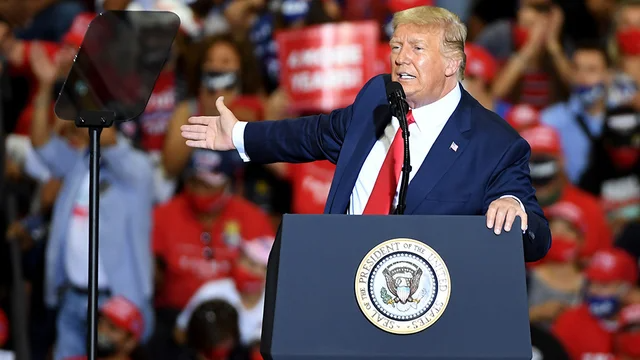 Almost immediately after news of Supreme Court Justice Ruth Bader Ginsburg’s death, some verified Twitter users threatened arson and apparent violence in order to block Republicans from replacing her before the elections.

“If they even TRY to replace RBG we burn the entire f—–g thing down,” author Reza Aslan tweeted. He later responded to Senate Majority Leader Mitch McConnell’s vow to hold a vote on President Trump’s nominee. “Over our dead bodies, literally,” he tweeted.

A Canadian political science professor called for arson, prompting accusations he made a terroristic threat. “Burn Congress down before letting Trump try to appoint anyone to SCOTUS,” Waterloo professor Emmett MacFarlane tweeted.

In response, Canadian attorney Ezra Levant worried about the consequences for MacFarlane’s students.

“Macfarlane is a professor at @UWaterloo, promoting violence against his political enemies,” he said. “If you were a young woman in his class who was a Trump supporter, would you risk being a target of his violent rage if he found out about you? Should you transfer to a different class?”

Ginsburg’s death came just weeks before the presidential election and opened the opportunity for Republicans to dramatically shift power on the Supreme Court by confirming another conservative justice. Democrats have long criticized McConnell, R-Ky., of hypocrisy given his previous refusal to hold a vote on Supreme Court nominee Merrick Garland before the 2016 elections.

McConnell has maintained, however, that Garland’s confirmation was unique in that the Senate and executive branch were controlled by different parties. That isn’t the case in the wake of Ginsburg’s death.

The incredibly high stakes prompted what appeared to be panicked reactions from many on Twitter. Writer Beau Willimon threatened: “We’re shutting this country down if Trump and McConnell try to ram through an appointment before the election.”

A member of Wisconsin’s ethics commission, Scott Ross, ordered Sen. Ed Markey, D-Mass., to “burn it all down” if he couldn’t stop McConnell. “F—–g A, Ed. If you can’t shut it down, burn it down,” he said.

“If McConnell jams someone through, which he will, there will be riots,” warned GQ writer Laura Bassett.

Fox News host Greg Gutfeld responded to the controversy by criticizing anyone who might mock people for worrying about political terrorism.

Isn’t it funny how those who claim to be the most tolerant among us, are actually the most intolerant of all of us?

So, anyway, here we are…with a bunch of paid and unpaid “useful idiots”, i.e., Far Left Wannabe Marxists, telling all of us normal Americans living out here in the Heartland, how stupid and intolerant we are, for actually holding on to Traditional American Values and wanting to “Make America Great Again” through allowing President Donald J. Trump to make the same decisions that everyone else who ever held the office of the President of the United States of America has had the power to make.

I have heard this kind of garbage before.

Back in 2011, I got into a discussion on Andrew Breitbart’s Big Government website with some Cheetos-munching, Mom’s basement-dwelling Lib with no home training, who proceeded to tell me that he would be proud to defecate on the American Flag.

If I could have reached through my computer monitor and throttled that useless, ungrateful spoiled brat, I would have.

That “dude” was yet another example of the useful idiots of this present generation, such as the members of Antifa and BLM, who seem to be garnering a lot of national attention for their outrageous, disrespectful, intolerant…and, yes, violent, behavior.

Just as we have bore witness to the glorification of thugs and the vilifying of our local police departments by the Obama Administration and the local “communities” which they lay their lives on the line for, every day they put on their uniforms, the effects of LBJ’s “Great Society” on American Culture and the Black Family Unit, so are we witnessing, through the behavior of this present generation of “New Bolsheviks”, who riot, threaten, and commit violence when they don’t “get their way”.

The behavior of these New Bolsheviks is what happens when children are left to “their own devices”, instead of being raised “in the way in which they should go”.

These “spoiled brats”, as exemplified by those who are threatening riots and physical violence towards the President, do not care about the “Will of the People”, but, rather, they are intent on implementing and enforcing their Far Left Political Ideology, resulting in a “Tyranny of the Minority”, which we saw play out, as paid and unpaid protestors attempted to stop the Nomination and Installation of Judge Brett Kavanaugh as our latest Associate Justice on the Supreme Court, Trump’s Campaign Rallies, in an attempt to somehow halt the fulfilling of President Trump’s Campaign Promises in order to stop comeback of America which he has been responsible for and to hold on to their “FREE STUFF” bestowed upon them by the “benevolent masters” of the Democrat Party, and recently in the horrible riots and violence in our major cities on behalf of criminals who did not deserve any support.

If you have ever attempted to debate a Liberal on a Facebook Political Page or a Political Website, they always attempt to present their opinions as facts, with nothing by Political Rhetoric to back them up.

The use of Karl Marx/Saul Alinsky-inspired “Class War Politics” by the Democratic Leadership, while promising to somehow restore Barack Hussein Obama’s “share the wealth” failed Domestic Policy, has inspired these self-absorbed Modern American Liberals to act like the Bolsheviks of the Russian Revolution, in an attempt to create a divided nation, the likes of which has not been seen since “The War of Northern Aggression” for the sole purpose, as Senator Lindsey Graham pointed out in the Kavanaugh Hearings, to gain back their political power.

When our Founding Fathers sat down to provide form and substance to the laws and procedures for governing this new country, which they had fought and won a bloody war over, by pledging their lives, their fortunes, and their sacred honor, they were very aware of the price of tyranny and the danger of mob rule.

And, that Sacred Document, our United States Constitution, gives each of us the right, including Trump, to speak our minds and be heard.

It gives the protestors of the Presidency of Donald  J. Trump that right, too…but, not at the expense of others, by attempting to destroy a good man through lies and innuendos or by strong-arming and harassing those who refuse to believe the way they do, for the expressed purpose of denying someone their First Amendment Rights.

Our Constitution, in fact, allowed then-Democratic Presidential Candidate Hillary Clinton to call all of us who believe in Traditional American Values and the preservation of American as the Greatest Country on God’s Green Earth “Deplorables”.

However, that same Constitution, which Americans have fought and died for to preserve, also gives me the right to label the self-entitlement-driven condescending Political Ideology of these New Bolsheviks what it actually is: