So this leftist outfit called the Transition Integrity Project (TIP) gamed out what they think are the four most likely outcomes of The Election and looked at all the ways The Bad Orange Man would “react” in each case – the purpose being, of course, to get their Talking Points in order both for pre-election Battlespace Preparation and post-election actual tooth and nail fighting be it in court or on the street.

The 22 page report can be found via this Powerline post and can be downloaded as a pdf document:

Last week something called the Transition Integrity Project (TIP) made huge news with a 22-page report on a simulation exercise of scenarios of what might happen in the event we have a contested election in November.

The TIP was comprised of the Usual Suspects: Tony Podesda being the most recognizable Big Donk and notable NeverTrumpers David Frum and Max Boot from the, uh, “sane conservative” side.

I know most of you are rolling your eyes now but keep going, because this is an Important Document to read in it’s entirety.

It is basically a strategic and tactical blueprint for how the Donks and their NeverTrump allies plan to defeat Trump and squash Trump’s Deplorables (that’s us).

(For the details on this plan see Appendices C on the pdf.)

A real world example of how this document is already finding it’s way into the “mainstream press” is this recent David Brooks column.  The talking points Books uses and the TIP document recommendations are so mirrored and over-lain it is breathtaking.

My guess is that if Trump gets crushed in the election, millions of Republicans will decide they never liked that loser and jerk anyway. He’ll get relegated to whatever bargain basement they are using to hold Sarah Palin.

Rest assured, the Democrats always telegraph their true intentions through projection of what they are really planning to do upon the hapless GOP.

(For example: be prepared for angry Trump supporters to violently riot in the streets of cities. Yeah right…)

This document is a stark reminder of what they are going to do this fall. 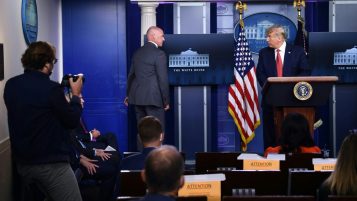