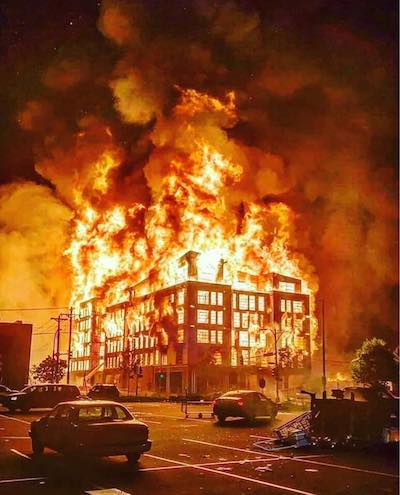 An couple of Blasts from the Past that still echo today, one by cementer Eon2 and the other by Your Uncle Bruno:

The End of History: Rosencrantz & Guildenstern Are Alive

The Marxist academics have won the war of historical platforming; we no longer have a uniting, over-arching shared history in America, only a constantly twisting kaleidoscope of equally valid, equally subjective individual “interpretations” of historical events and personages. The term “facts”  is way to appropriately discriminatory to be commonly agreed upon in these fractured times.

Today history is presented as a crazy-quilt of Rosencrantz & Guildensternism: each micro-sized and multiply-intersected grievance group holds the Torch of Their Truth but only inasmuch as it illuminates what is experienced as the shared context of the Allies of the Day.

The disruptions of Antifa, BLM, and babbling idiots like Slapsie Maxie Waters would not have surprised Spengler in the least, as he held that one sure sign of the fall was the rise of schismatic cults led by madmen (or -women, as the case may be). He specifically cited the “millennialist” cults around 1000 AD as an example.

He did identify Islam as the next great example of a Faustian culture. One which would likely self-destruct in its quest for Paradise.

He also stated that a culture only attains the status of “civilization” just before its fall. Or in other words, about the time people start defining themselves as “too civilized to (fill in the blank)”, along comes the uncivilized barbarian, whether from the outside, or homegrown, or sometimes a match made in hell of both, to kill the “civilized” man, burn it all down, and then fight over the spoils like stray dogs fighting over a scrap of meat and bone.

Amazing when you consider these posts were written in November 2018…