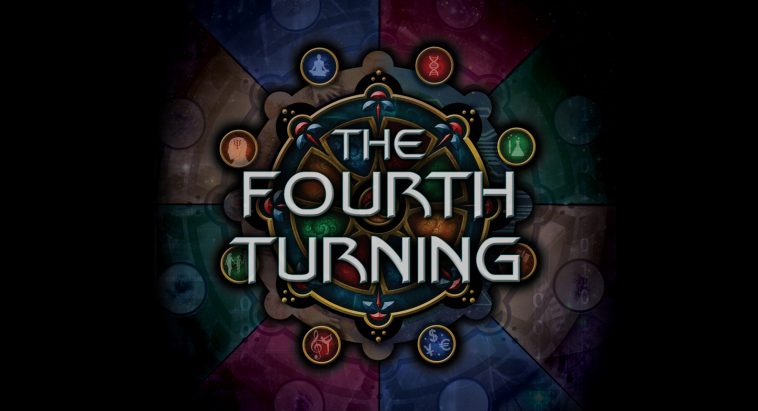 As many of our Spartans know, I am a big believer in Generational Theory as espoused by William Strauss and Neil Howe in their 1996 book, “The Fourth Turning.” Generational theory suggests that like each year has its seasons, Spring, Summer, Fall and Winter, societies operate in the same manner but are based upon Generations named “Turnings.”

Turnings in Generational Theory are also called “Archetypes.” Four Turnings of 16 – 22 years each are called a “Saeculum” lasting about 80-90 years. Strauss and Howe observed Saeculums going back to 1584 for their research.

Turnings in a Saeculum have characteristics unique to each. Each Turning creates new social, political and economic climates. At the end of every Saeculum, the 4th Turning, a “Crisis” will occur that will change life and societies in untold ways.

New Saeculums begin with a Recovery from a previous 4th Turning (The First Turning.) It sets the stage for following Turnings. Turnings 2, 3 and 4 are all about countering 1st Turning norms.

The First Turning – The High

According to Generational Theory, the First Turning in a new Saeculum is a High. Highs come after Crises. Society wants to coalesce and build and replace the death and destruction of the previous crisis. Institutions are strong and individualism is weak. Society is confident about where it wants to go collectively, although there are those who will feel stifled by the conformity.

The most current First Turning was the post World War 2 High, beginning in 1946 and ending with the assassination of John F. Kennedy on November 22, 1963.

The Second Turning is an Awakening. Institutions are reviled in the name of personal and spiritual autonomy. People tire of social discipline and want to recapture a sense of “self-awareness”, “spirituality” and “personal authenticity”. Young activists look back at the previous High as an era of cultural and spiritual poverty.

The last Awakening was the “Consciousness Revolution,” which spanned from the campus and inner-city revolts of the mid-1960s to the tax revolts of the early 1980s.

The Third Turning is an Unraveling and the opposite of a High: Institutions are weak and distrusted, while individualism is strong and flourishing. Unravelings come after Awakenings, when society wants to atomize and enjoy. The latest Unraveling began in the 1980s and included the Reagan Recovery and Culture Wars of the 90’s.

The Fourth Turning is when the Crisis occurs. This is a time of secular upheaval often brought on by war or revolution. Institutional life is destroyed and rebuilt based upon real or perceived threats to the nation. Strauss & Howe describe it as such:

“The risk of catastrophe will be very high. The nation could erupt into insurrection or civil violence, crack up geographically, or succumb to authoritarian rule. Thus might the next Fourth Turning end in apocalypse – or glory. The nation could be ruined, its democracy destroyed, and millions of people scattered or killed. Or America could enter a new golden age, triumphantly applying shared values to improve the human condition. The rhythms of history do not reveal the outcome of the coming Crisis; all they suggest is the timing and dimension.” – Strauss & Howe

The Crisis period ends with a civic authority revival, greater community purpose and a tendency for people to once again solidify as members of a larger group.

The current Crisis Turning began about 2008 with the Housing/Financial Crisis and should last until the late 2020’s.

It is only towards the end of a 4th Turning that a “trigger event” occurs which brings on the society altering Crisis.

Back in 2016, I wrote that 2020 would be a critical period of time when the Trigger Crisis could occur.  So far, 2020 has certainly been memorable in potential “Trigger Crisis” events and it is only half over. So far, we have seen:

When Covid–19 broke out and the beginning of the countrywide lockdowns started, it was reasonable to expect that this was the Crisis trigger. Little did I expect that combining with Covid-19 would be the death of George Floyd, a common thug and career criminal at the hands of a dysfunctional cop which would add to the events triggering the Crisis.

Already, the Crisis is exhibiting signs that will serve to reshape the basic social and economic environment that has existed in America for the last few decades. We see it through the many events occurring on a daily basis.

State Shutdowns – America has essentially been put under partial martial law by the individual states. People have been ordered to stay at home with non essential work and travel forbidden. One cannot go to see relatives, sick or well. Fitness centers, restaurants or places of entertainment are off limits. (Though states are “opening up” there are still major restrictions in place.)

Economy – Business activities have been severely restricted. Many businesses will never recover from the new restrictions. Restaurants, fitness centers and cinemas have been especially hard hit. Retail giants are filing bankruptcy, unable to pay their debt. The millions of small businesses demolished are not coming back. The unemployment rate will never approach 3.5% again.

Airlines are down 95% in travelers. They are cancelling air routes across the country in hopes of staving off bankruptcy.

Finance – The Government has injected trillions of dollars into the hands of citizens and businesses alike, increasing the federal debt. The Fed has dropped interest rates down to essentially zero, and engaged in more Quantitative Easing to try and keep the financial system afloat. These actions are now at a point where they can never be unwound without driving the country into a deeper Depression.

Cultural & History – Cultural symbols are being targeted as racist. Cultural and historical statutes are being pulled down and destroyed. The Founding Fathers are targeted for owning slaves or supporting slavery. Even Mount Rushmore has been found to be racist for the former Presidents that are carved into its face.

Sports teams must also change names and mascots or face the wrath of BLM.

Law & Order – Protesting is occurring across the country. Rioting and looting is rampant. The police are under attack. Cities face demands to defund police departments, or get rid of them entirely. Institutions are being forced to change their names.

Identical protests and riots have broken out in Europe as well as America. Mysterious pallets of bricks have suddenly appeared where riots broke out. This provides credible evidence to indicate that this is a well planned attack with significant resources behind it to undermine Western Society.

Individuals – If a person has anything in their background that could be claimed to be racist, no matter how far back, that person is now subject to attacks, verbal and physical. If a person questions the narrative, the labeling of racist is guaranteed to occur and he can be subjected to firing from his place of employment.

Government – Faith in the leadership of this country is waning. People are learning they can’t depend on the government to take care of them during this time of crisis. Gun stores across the country cannot keep firearms or ammo in stock as people prepare for the worst.

2020 Elections – The 2020 elections will not resolve the issues. Already the campaigns of various candidates are fraught with propaganda, misinformation and lies. The losing side will not accept the outcome, no matter how decisive the victory.

If President Trump wins reelection, the Democrats will not accept the results of the election. Cries of fraud will be rampant and violent protests will increase. If the House remains in Democratic hands, impeachment proceedings begin anew.

If Biden wins, his VP pick will invoke the 25th Amendment almost immediately allowing the VP to become President. The Leftist Agenda will be instituted without concern for legality, including gun control measures.  The Right will resist, leading to deadly confrontations throughout the country.

Before the end of the 4th Turning, I expect to see:

1) A full blown Depression with unemployment over 20% will occur. Corporate and personal bankruptcies will exceed the previous Depression numbers. Places where people gather, bars, restaurants, airlines, cruises, stadiums, movie theaters will find themselves unable to continue in business. This will lead to more bankruptcies and people out of work.

2) Bank and Wall Street bailouts will increase. Over 50% of the stock market value will disappear. Pensions and retirement funds will be wiped out.

3) The Retail collapse and “online buying” combined with companies realizing that “work from home” will save them money will result in a commercial real estate collapse. Malls are finished, as major retailers declare bankruptcy.  Office complexes will close since the large footprint is not needed with work from home.

4) Residential Real Estate will collapse with the coming foreclosure crisis. Banks will stop lending. Buyers will leave the market. Urban areas will face decline as people move out to suburban and rural areas. Prices could drop 60% or more.

5) State and local governments are dependent upon various  taxes to pay for their bloated bureaucracies. As the Depression continues, they will face overwhelming deficits. Government pensions will go unfunded and unpaid.  Government workers will be laid off adding to the discontent.

6) Stimulus payments to individuals will become more and more common resulting in the implementation of a Universal Basic Income. The payments will come from the Fed printing presses working overtime, adding to inflation concerns. Entitlement programs will be retooled.

7) Health care will become a “right.” Universal Health Care will be implemented.

8) A Debt Jubilee for all government owned debt including mortgages and student loans will occur. Write downs of private debt will be common, especially through bankruptcy.

9) A low intensity Civil War in the United States will begin. Cities will be battlegrounds with the Left fighting the Right. Rural areas will be mainly untouched.

10) Significant anti-gun legislation will be passed. People will not give up their guns leading to more violence.

11) Democrats control Congress and Presidency in 2024

12) As American power decreases across the world, China will make further inroads into the Spratly and other islands in the South Pacific. Taiwan will be targeted for takeover.

Russia will make new inroads into Eastern Europe. Balkan countries will be at risk again. War in the Middle East is once again very likely.

13) The European Union will dissolve. There will be major civil unrest like in American. A return to European border wars begins anew.

As bleak as the near term future looks, all is not lost. The world will change without doubt, but there will be ongoing changes with the new 1st Turning.

America and North and South America are unusually strong overall. The two continents are rich with natural resources. From minerals to waterways, we have what Europe and Asian continents don’t have.

Canada, Mexico and the US will form a natural trading partner alliance far better than what is currently present. South America will then be brought in the trading alliance. This will strengthen both continents and allow all to ride out the economic disruptions in better shape than the rest of the world.

A reversal of the socialist movement currently ravaging America will begin to occur in the mid to late 2030’s. By 2040 – 2045, America will have recovered along with the rest of the America’s. The rest of the world will not be so lucky.

And with that, all I can say is “Hang on! It is going to be a bumpy ride!”