The AFFH rule was a ruse for social engineering under the guise of desegregation, essentially turning @HUDgov into a national zoning board.

President Trump told suburban voters in a tweet on Wednesday they will “no longer be bothered or financially hurt” by having low-income housing in their neighborhood after his administration revoked an Obama-era housing rule.

The Affirmatively Furthering Fair Housing, or the AFFH rule, was designed to eliminate racial disparities in housing by telling jurisdictions that receive housing funds they must assess patterns of housing discrimination and come up with a plan to diminish them.

“I am happy to inform all of the people living their Suburban Lifestyle Dream that you will no longer be bothered or financially hurt by having low income housing built in your neighborhood,” Trump tweeted Wednesday. “Your housing prices will go up based on the market, and crime will go down. I have rescinded the Obama-Biden AFFH Rule. Enjoy!”

The Department of Housing and Urban Development (HUD) rescinded the 2015 rule last week as Secretary Ben Carson said the rule was “unworkable and ultimately a waste of time for localities to comply with.”

It will be replaced by a new rule that reduces the burden of local jurisdictions to prove that they are actively taking steps to address historical patterns of racial segregation in order to qualify for HUD financing.

“Washington has no business dictating what is best to meet your local community’s unique needs,” Carson said.

Housing advocates have dinged Trump’s opposition to the rule as a racially charged appeal to white voters in the midst of an election year, as Trump has repeatedly said the rule forces the construction of low-income housing in suburbs.

“Your home will go down in value and crime rates will rapidly rise,” Trump said last week. “People have worked all their lives to get into a community, and now they’re going to watch it go to hell. Not going to happen, not while I’m here.”

“At the request of many great Americans who live in the Suburbs, and others, I am studying the AFFH housing regulation that is having a devastating impact on these once thriving Suburban areas,” the president tweeted. “Corrupt Joe Biden wants to make them MUCH WORSE. Not fair to homeowners, I may END!

“Biden will destroy your neighborhood and your American Dream,” Trump tweeted last week, along with a New York Post column entitled “Joe Biden’s Disastrous Plans for the Suburbs.”

“I will preserve it, and make it even better!” Trump added.

The New York Post column claims that under the AFFH rule, “towns everywhere would have had to scrap zoning, build bigger water and sewer lines to support high-density living, expand schools and social services and add mass transit. All pushing up local taxes. Towns that refused would lose their federal aid.”

Carson has said jurisdictions were “forced to comply with complicated regulations that require hundreds of pages of reporting” under the Obama-era rule.

The issue has been a long-standing issue for Carson, and fair housing advocates say the program never truly got off the ground because Carson suspended its implementation shortly after taking office. Biden has said he would implement the rule.

Biden’s housing plan would get rid of zoning regulations in suburbs that send prices skyrocketing.

“Exclusionary zoning has for decades been strategically used to keep people of color and low-income families out of certain communities,” Biden writes.

It would also vastly expand Section 8 housing vouchers, enact laws to prohibit landlords from discriminating those who pay with vouchers, establish tax incentives to build affordable housing, protect tenants from eviction by providing them legal assistance, among other policies that Biden thinks would make housing more affordable.

How does that work in cities that are already 90% minority population, like Detroit or Memphis?

As Charles Barkley pointed out a while back, Racism is not just a one-way street. How do you think that these cities got this way? Not all of their white citizens moved out because they wanted to.

And, what about Black Americans who have worked hard to move out to the suburbs, seeking a better life for them and their children?

Why is this happening? How did we get here?

Back in the 60s, President Lyndon Johnson (whose big hand I once shook, at his ranch, as a little boy, after his presidential term) and the Democrats, brought forth a plan, called “the Great Society”. It was decided, in order to ensure that everyone would have an equal opportunity in America, that Uncle Sugar would step in to fill in the gaps.

First, the Civil Rights Bill that JFK promised to sign, before his assassination, was passed into law. This Act banned discrimination based on race and gender in employment and ending segregation in all public facilities.

It also helped to cement in stone, American Minorities’ loyalty to the Democratic Party, which continues to this day.

The second bill that LBJ signed into law was the sweeping ECONOMIC OPPORTUNITY ACT OF 1964. It created the Office of Economic Opportunity whose stated purpose was to attack the roots of American poverty. A Job Corps was then established to provide vocational training.

A preschool program designed to help disadvantaged students arrive at kindergarten ready to learn, named HEADSTART, was then established. Then came VOLUNTEERS IN SERVICE TO AMERICA (VISTA), which was set up as a domestic Peace Corps. Schools in impoverished American regions would now receive volunteer teaching attention. Federal funds were sent to struggling communities to attack unemployment and illiteracy.

What Johnson told Americans, as he campaigned in 1964, was that the establishment of this “Great Society” was going to eliminate the problems of America’s poor.

It had the opposite effect.

The Great Society created a dependent class, which, instead of diminishing as it’s members joined the workforce, increased from generation to generation, relying on the federal government to provide their every need.

Uncle Sugar became Mother, Father, Preacher, and Doctor to generations of Americans. This “plantation mentality” continues to this day.

Instead of moving forward, by exercising the self-reliance that Dr. Martin Luther King, Jr. preached so well, the people I saw, while working in a State Employment Office, were content on being “taken care of” by Uncle Sugar, as if being held down by their own poor, miserable circumstance, was a good thing.

The results of LBJ’s “Great Society” continue to be the lead story in seemingly, every television newscast, on every newspaper front page, and on every internet news/political website.

On a Sunday, in October of 2008, outside of Toledo, Ohio, Democratic Presidential Nominee Obama met a plumber named Joe Wurzelbacher. Joe, who owned his own plumbing company, dared to ask Obama about his proposed tax hikes. In fact, he told Obama that he did not want to pay higher taxes, he was already paying enough. Obama told him,

Now, I respect the disagreement. I just want you to be clear – it’s not that I want to punish your success – I just want to make sure that everybody who is behind you – that they’ve got a chance at success too.”

…I think when you spread the wealth around, it’s good for everybody.

This, boys and girls, is called “Marxism”.

If Joe Biden is elected President, “Democratic Socialism” would be put in place in the “Land of the Free and the Home of the Brave”.

No American Exceptionalism ever to be spoken off.

No individuality allowed in the Proletariat.

President Trump wants EVERYONE TO ACHIEVE and to be rewarded for tat hard-earned achievement.

That is why he continues to work hard to bring jobs back to America.

And, why he is the ONLY candidate in the 2020 Presidential Election who will work hard to make America great and her citizens prosperous again. 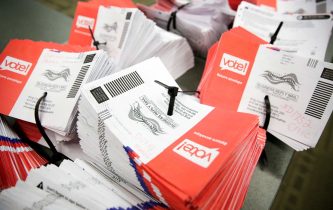