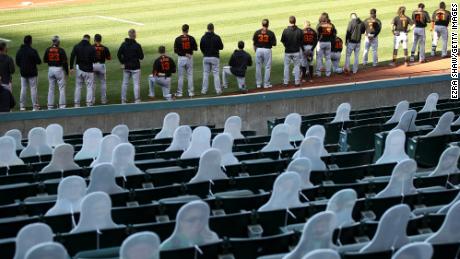 As a grimy youth I was a Baseball Kid.

Never mind I was always one of the last kids picked down at the local sandlot, usually stuck in right field where I could do the least harm and if I batted Second to Last in the day’s line-up it was a call to jump for joy.

I loved the game even though my lifetime stats would confirm I couldn’t play it even not very well.

(When Casey Stengel lamented about the 1962 Mets “Can’t anybody here play this game?” it was like God had spoken directly to me…)

The daily Twins game on the radio was a constant and a Saturday Afternoon Game of the Week on the fuzzy black & white rabbit-eared tube & box was even more special if The Hated Yankees were not part of the broadcast.

To this day I remember a game between the Giants & Phillies where Orlando Cepeda was holding a runner at first base when Tony Gonzalez stepped into the batter’s box.

Apparently the two were famous friends off the field but this day Cepeda decided to tease Gonzalez by taking off his first baseman’s mitt and challenge Gonzalez to hit a liner at him so he could grab it with his bare paw.

The broadcast booth announcers were nearly in tears as Gonzalez stepped out of the batters box to yap at Cepeda in Spanish – probably because the English translation would have been a bit too salty for the TV audiences of the day.

Sixty five brought nirvana with the All Star Game in Minny and the Twins first World Series (damn you Sandy Koufax…).

After that the Hook was Set for Life.

The Great Race of ’67, the Miracle Mets of ’69, Carlton Fisk’s waved home run against the Reds at Fenway in ’75 – moments iced in the pond of time.

A life-long love affair with the Local Nine, always requited and then some:  from a heart-beaking Game 160 played in The Mistake by The Lake when the obscure Jamie Quirk’s walk off moon-shot capped a stunning 10-run comeback by the Tribe against The Feisty ’84 Twins and doomed their unlikely pennant run on the final weekend (after the game Twins third sacker Gary Gaetti quipped “it’s hard to play baseball with both of your hands wrapped around your neck…”) to The Glory Year (1987) finishing a paltry 85 – 77 but it was the next twelve that counted most and finally Killed the Monkey on Our Collective Backs to Kirby Puckett and Jack Morris tomahawk chopping Ted & Jane’s Atlanta squad in the greatest World Series Ever Played in 1991.

The Game survived the Designated Hitter, inter-league play, Idiot Owners, wild card playoff teams, the Strike Season, Reggie, Billy & George feuding (“one’s a born liar and the other’s convicted” quipped the mercurial Martin when asked about Jackson and Steinbrenner) and thrived when Hollywood turned a damn Iowa corn field into a Shrine to Heaven – the place where Moonlight Graham can still be seen in the fleeting shadows as Fathers and Sons have A Catch right before dusk settles.

Who needs The Game of Thrones when you have The Game of Threes: three bases, three strikes, three outs, ninety feet between bases and sixty feet, six inches mound to home plate (both evenly divisible by three – the same goes for 9 innings and 9 batters in a line-up) and finally the most Exciting Play in Sports – a triple ripped into the gap where the runner slides into third just safely under the tag.

So ubiquitous The Very First Guest Host on the Very First Saturday Night Live used it in his monologue musing that “In baseball you get to Go Home!”  (George Carlin)

A game so good that even the Baby Boomers couldn’t destroy it (though not for lack of trying).

No it took The Millennials to build upon The Chinese Virus to fatally infect it with Political Correctness. (Try and re-make Major League today and see what you get for Your Troubles…)

Yes, this weekend when The Shortest Season gets underway there will be kneeling and arm patches and stern lectures about lives that matter and hectoring about supremacy and oppression and any number of other Hip Topics delivered to a shrinking fan base.

Thank you for your eternal toxicity, Howard Zinn; you won and we are all the poorer for it – especially The Lostest Generation that were the first to graduate from high school fully propagandized.

Baseball goes on hospice this weekend.

No more winning innings left to record in The Great Scorebook.

Time to clear off the kitchen table, break out the 1964 season of Strat-O-Matic dice baseball and try one more time to coax Those Fading Phillies to a happy finish in The Year of the Blue Snow…