Like it or not, Trump & The Deplorables are in Deep Shit right now and it’s being made worse by an ostrich-like response.

Yeah, Joe Biden is Demented, even recent polls show a majority of the country thinks He’s Not All There.

He’s not driving The Narrative; he’s simply a passive, empty receptacle and needs to maintain that status for the next four months.

That’s a job Joe can do.

The Real Power is in The Forces of The Narrative and they are formidable: the Deep State and the permanent Washington Establishment, the Main-Stream Media (both electronic and print), Big Tech cabals and their highly organized Cancel Culture minions, the Hollywood/Entertainment complex, the cowed Corporate State demonstrated by the fearful sacking of Aunt Jemima, Uncle Ben and Mrs. Butterworth, the ultra-wokeness of major league sports from the NFL to the MLB to NASCAR, formerly main-stream churches now promoting a radical black Marxist interpretation of history disguised as heartfelt social justice, the Non-Profit/Educational complex that drives the group-think of white wine sipping white suburban women, the alliance of Soros-funded SJW radicals headed by their BLM/Antifa/AIM shock troops, the weak & apologetic fainting-couch mainstream GOPers & the more vocal cadre of #NeverTrumpers and the AOC/Omar Democrats who are the Real Power making Nanzi and Weepy Chuck kneel.

This is not 2016 with “joke candidate” Donald Trump sneaking up and stealing Michigan, Wisconsin and Pennsylvania from a pathetic and over-confident Clinton campaign.

The Forces have had almost four years now to hone The Narrative and plan their Destruction of Trumpism (that’s us, The Deplorables, who are hated equally, maybe even more, than Trump himself.)

We are not in a Good Place.

The Sweet Meteor of Death that has been 2020 has killed The Economy, divided and frightened a significant portion the populace with The Plague, opened the door for Vote by Mail and other fraud schemes, and generally driven the Narrative of a Nation consumed with Hate, Racism, White Supremacy, National Illegitimacy and encouraged a degree of Self-Loathing whereby even the owner of Chick-fil-A feels it necessary to debase himself and destroy his company’s carefully constructed brand.

So yeah, in a straight up match between Biden and Trump it’s a no-brainier about The Outcome.

But we’re in a Rigged Game now, on a a massively tilted playing field the likes of which This Old Geezer has never witnessed.

It’s beyond Gaslighting – it’s a dimension unknown where The Narrative is gathering more momentum every day.

We’re in The Alamo on Day 13 now and The Enemy is swarming over the walls; our Davy Crockett needs to stop the idiotic tweets & pantomime, climb up onto The Ramparts and start swinging his musket and smash some Narrative Noggins.

A focused, sustained and direct attack on the NYT’s 1619 Project would be a first step in preserving the American way of life… 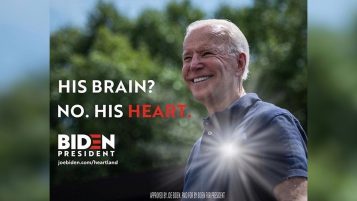