I can’t believe I have to say this, but do NOT defund the police. pic.twitter.com/eWug4gPXp5

Former Hillary Clinton press secretary Brian Fallon took heat on Thursday for calling to “defund the police” as the nation is gripped with protests and riots against police brutality.

The “defund the police” movement has gained traction by Black Lives Matter activists following the death of George Floyd.

Missouri Republican Sen. Josh Hawley asked Fallon on Twitter if this was now the “official position” of the Democratic Party.

“Obama-Biden Justice Department Spokesman calls for defunding the police,” Grenell wrote. “This must be widely condemned by the Biden campaign immediately.”

“How brave! This, coming from Hillary Clinton’s former Spox who rode around in motorcades with her with Police escorts to keep them safe,” she said.

Though the push has gained traction online, a leader with the Congressional Black Caucus seemed to reject the demand on Wednesday.

“No, I don’t believe that we should defund police departments,” said caucus chairwoman Rep. Karen Bass, noting that she was “not familiar” with that demand from Black Lives Matter and would further consult them.

Activists calling to defund police departments want resources diverted to other investments in the black community, such as education, health care and other community services.

The #DefundThePolice petition has gotten the support of liberal celebrities, including singer John Legend.

But the progressive movement doesn’t appear to be gaining traction in the House. Instead of zeroing out police department budgets, lawmakers are focused on police reforms. The proposals are still being developed, but Bass outlined the broad themes of the “comprehensive” legislation: holding police accountable, identifying bad cops and training officers.

The House Judiciary Committee will hold a hearing on the police reforms next week, Bass said, which will jumpstart the House’s legislative response. Details of the forthcoming committee hearing have not yet been released.

The package of bills is being developed with the Congressional Black Caucus and Sens. Cory Booker, D-N.J.,  and Kamala Harris, D-Calif., in the Senate.

For the edification of Rep. Karen Bass, here is BLM’s official position, found on a petition posted at BlackLivesMatter.com…

Our pain, our cries, and our need to be seen and heard resonate throughout this entire country.

We demand acknowledgment and accountability for the devaluation and dehumanization of Black life at the hands of the police.

We call for radical, sustainable solutions that affirm the prosperity of Black lives.

George Floyd’s violent death was a breaking point — an all too familiar reminder that, for Black people, law enforcement doesn’t protect or save our lives. They often threaten and take them.

Right now, Minneapolis and cities across our country are on fire, and our people are hurting — the violence against Black bodies felt in the ongoing mass disobedience, all while we grapple with a pandemic that is disproportionately affecting, infecting, and killing us.

We call for an end to the systemic racism that allows this culture of corruption to go unchecked and our lives to be taken.

We call for a national defunding of police. We demand investment in our communities and the resources to ensure Black people not only survive, but thrive. If you’re with us, add your name to the petition right now and help us spread the word.

#BlackLivesMatter was founded in 2013 in response to the acquittal of Trayvon Martin’s murderer. Black Lives Matter Foundation, Inc is a global organization in the US, UK, and Canada, whose mission is to eradicate white supremacy and build local power to intervene in violence inflicted on Black communities by the state and vigilantes.

…We are a collective of liberators who believe in an inclusive and spacious movement. We also believe that in order to win and bring as many people with us along the way, we must move beyond the narrow nationalism that is all too prevalent in Black communities. We must ensure we are building a movement that brings all of us to the front.

For those of you who do not already know, George Soros has donated millions of dollars to Black Lives Matter.

So, why do Democrats like Former (Thank God) President Barack Hussein Obama and others support a radical organization whose goal is to “radically Change America through fermenting Racial Animus and Racial Division?

By the time President Lyndon Baines Johnson came into office, after the assassination of President John Fitzgerald Kennedy, the majority of Americans totally believed that our government always had our best interest at heart.

President Johnson came into office and immediately started his push for the Great Society. These programs were designed to make Americans even more dependent on the Federal Government for their very survival.

Time passed, and while rebellious Americans calmed down, Americans’ dependence upon government programs became generational, as multiple family members from one generation to the next, relied on Uncle Sugar for their daily existence.

Meanwhile, the rebels of the 1960’s got older and began to work within the system, taking jobs within the private and public sectors.

Eventually, they moved into positions of power, becoming heads of corporations and local and national politicians.

It is not really necessary to tell you what the political ideology of these rebels was, is it?

As the last century ended and the new one began, these hippies and their offspring, solidly in place in the halls of power, began to pass more more legislation designed to keep generations of Americans enslaved to Uncle Sugar.

What we are witnessing during he “George Floyd Riots”, which are really not about George Floyd at all, is the result of anti-establishment rhetoric, spewed forth by those who are now actually now “the Establishment”, taking hold, and spreading Class Envy and Racial Animus in such a way as to inspire violent retaliation for perceived “grievances” against a fictional “White Establishment”, which actually is more representative of the Democrats who control them, and the Police, who are seen as the emissaries of “The Man”, “keeping Black Americans down”, when, in reality, Gang Violence,  Black-on-Black Homocides, and abortions, are doing more to damage the “Black Community” than “systemic racism” has.

And, now, across the nation in Democrat-run cities, Political Activists, supported by Black Lives Matter and Antifa, and funded by a guy who ratted out his Jewish Neighbors to the Nazis in Germany are attempting to “Defund the Police” and to destroy our Constitutional Republic and replace with a Marxist form of Anarchy.

It’s reminiscent of Lenin and the Bolsheviks. 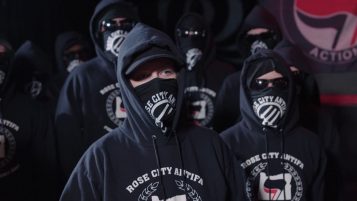