You know why they’re flipping out over the armed St. Louis couple?

Because they were told there would be no resistance.

They were assured you’d be paralyzed with fear of being called a racist.

They were guaranteed that once the cops were neutralized, you’d be easy prey.

A Missouri couple under fire for brandishing guns in the front yard of their home as protesters passed told police the group broke a gate to get onto the private street, and the pair say they only retrieved their firearms when they spotted “multiple” people who were already armed, department records show.

Al Watkins, an attorney for Mark McCloskey, 63, and his 61-year-old wife, Patricia, said the protest was largely peaceful and the pair did not bring their guns outside of the home until two men in particular, both of whom were white, started menacing them.

The McCloskeys, he said, were hesitant to come forward with the full story out of fear that they would “disparage the importance of Black Lives Matter.”

“At the time, their fear was, these people, two in particular, that were marching along with the Black Lives Matter protest participants – all peaceful. They were acting in a fashion inconsistent with the message being given,” Watkins said. “My clients were not arming themselves against peaceful protesters, they were arming themselves about people with a really bad motive, a motive that runs afoul of the fundamental tenets of our country.”

After the couple brought the guns outside, Watkins said, others began threatening them, unaware of the reason behind the couple’s interpreted need to arm themselves.

“My clients, though, had to deal with comments that were from two individuals that were perpetrating these acts of violence and, not charging, but coming toward them and doing so in a fashion that was threatening, menacing, and in a fashion inconsistent with the Black Lives Matter message.”

The pair called the St. Louis Police Department shortly before 7:30 p.m. Sunday. They told arriving officers that they had heard a “commotion” and, upon investigating further, “observed a large group of subjects forcefully break an iron gate marked with ‘No Trespassing’ and ‘Private Street’ signs.” according to an incident summary provided to Fox News by the department.

The police report does not identify the McCloskeys as the victims.

“Once through the gate, the victims advised the group that they were on a private street and trespassing and told them to leave,” the police summary further states. “The group began yelling obscenities and threats of harm to both victims. When the victims observed multiple subjects who were armed, they then armed themselves and contacted police.”

Based on the couple’s account, police labeled the incident a case of trespassing and assault by intimidation, according to the incident summary. No other police reports were filed that night, a department spokesperson told Fox News.

Mark McCloskey told KMOV-TV that a mob rushed toward the home as the family was having dinner and “put us in fear of our lives.”

“This is all private property. There are no public sidewalks or public streets,” McCloskey said. “We were told that we would be killed, our home burned and our dog killed. We were all alone facing an angry mob.”

Viral video posted to Twitter shows the McCloskeys, who are both attorneys, standing outside their Renaissance palazzo-style home in the city’s well-to-do Central West End neighborhood. He could be heard yelling while holding a long-barreled gun. His wife stood next to him with a handgun.

Watkins said the McCloskeys have each practiced law for more than 30 years have and “their practices have included, on an ongoing basis, representing individuals in pursuit of protection of their civil rights.”

“One hundred percent of my client’s clients in those cases have been people of color,” Watkins said.

Meanwhile, the protesters were reportedly marching toward Mayor Lyda Krewson’s home to demand her resignation.

The group of at least 500 people chanted, “Resign, Lyda! Take the cops with you!” news outlets reported.

Krewson has faced demands for her resignation after a Facebook Live briefing on Friday where the white mayor read the names of those wanting to defund the police force. The video was removed and Krewson apologized the same day, saying she didn’t intend to cause distress.

The names and letters are considered public records, but Krewson’s actions caused a heavy backlash.

Protesters nationwide have been pushing to “defund the police ” over the death of George Floyd and other Black people at the hands of law enforcement. Floyd, who was handcuffed, died May 25 after a white Minneapolis police officer pressed his knee on Floyd’s neck for nearly eight minutes.

Let me get this straight. The McCloskeys had defended “people of color” in civil rights cases for 30 years.

And, when they were threatened by a couple of punk rioters, they exercised their second Amendment Rights and protected themselves.

And now, they are being ostracized by those whom they have defended in courts of law for 30 years, even though they are virtue signaling to anyone and everyone who will listen to them.

It appears to this crazy ol’ cracker that the McCloskeys are receiving a huge reality check.

As I have been writing, these demonstrations and riots have not been about “civil rights”.

They have been about ushering in a “Blue Wave” of Marxism designed to change our Constitutional Republic into a Democratic Socialist Third World Barrio.

Mr. and Mrs. McClosky, when your reality check happened the other night, it was in the former of two “New Bolsheviks” who saw you as just another rich white couple to canalize and assault in the name of “Social Justice and Equality”, i.e. , Marxism.

In a Marist State, the Proletariats are all equal…equally poor.

You are being attacked now because you dared to defend yourselves from “social justice”.

Which is in reality just code words for a failed political philosophy which has failed in every country that foolishly adopted it as the blueprint for their national government.

Your absolutely right in defending yourselves.

You showed more courage in that moment than the majority of politicians on both sides of the political aisle have shown since the riots and ensuing virtue signaling began to rip our Sovereign Nation apart at the seams.

I hope and pray that more Americans will begin to show the courage that you did.

Because if our political leaders will not stand up four us and our Constitutional Republican, then we will have to stand up for ourselves. 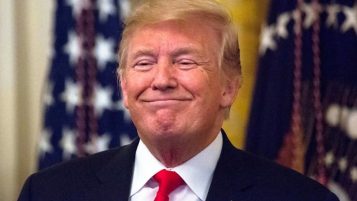