“I just don’t think that they’re gonna let Crazy Bernie win this. And either way, if he does or if they succeed in sabotaging him again, either way it’s just going to be one of the best shows on earth to sit here and watch.” – Rush Limbaugh, 2/11/2020

Sen. Lindsey Graham, R-S.C., claimed on “America’s Newsroom” Tuesday that “the demise of the Democratic Party” is underway, as voters headed to the polls in New Hampshire’s first-in-the-nation primary.

“The president’s in a spot where he really can’t lose as this plays out,” Graham said on Tuesday. “[Former Vice President Joe] Biden’s going to win South Carolina, you’re going to have three different winners in the first three states.”

He went on to say that if the 2020 Democratic National Convention in July comes around and “if you can’t find a nomination on the first round of voting, the Democratic Party as we know it is going to completely implode.”

Graham said if a nomination isn’t determined after the first round of voting, “It’s going to help President Trump get reelected.”

He then noted, “You’re seeing the demise of the Democratic Party that your grandfather and grandmother knew and we’ll see how that affects America.”

After getting out of Iowa’s caucuses with essentially a tie with 2020 nomination rival former South Bend, Ind., Mayor Pete Buttigieg, expectations are high for self-described democratic socialist Sanders in a state where he shares home-field advantage with fellow progressive standard-bearer Sen. Elizabeth Warren of Massachusetts.

When host Sandra Smith asked Graham why he doesn’t think Klobuchar, D-Minn., can fill Biden’s spot he said, “She doesn’t have the juice.”

“This is socialism versus liberalism,” he continued. “Amy is a nice person, but at the end of the day she’s not going to be able to compete with Bloomberg. He’s got just too much money.”

So, is “Woke Lindsey” right?

I certainly hope so.

As I write this post, there is less than 2 percentage points separating First Place Bernie Sanders from Second Place Pete Buttigeig in the New Hampshire Democratic Primary Election, followed by Amy Klobuchar, Elizabeth Warren, and Sleepy Joe Biden, who left New Hampshire early in the day after he realized that he was about to get his clock cleaned.

Right now, the Democrats’ front runners are two guys whom I am pretty sure that they do not want to be there.

Sean Hannity reported last night that Establishment Democrats are starting to back Bloomberg to parachute in either on Super Tuesday or at the Convention.

Wonderful idea…except for one little thing: the Establishment Democrats are not in charge of the party anymore.

The Far Left Democrats and their “Wokesheviks” are.

Another problem that the Democrats face is the fact that every single candidate that they have left is, at best, a Northeastern Regional Candidate.

And, even the folks in New Hampshire whom Elizabeth Warren tried to talk to in that restaurant seemed less than pleased that she was interrupting their meal.

Average Americans here in the Heartland, or “Realityville” as Rush calls it, are not going to vote for any of the Democrats’ choices, no matter whom they nominate.

Bernie Sanders, the old Marxist? The young adults in Dixie are out earning a living, raising their babies, and being thankful for their blessings. They’re not about to vote for someone who wants them to give the government more than they are now.

“Mayor” Pet Buttigeig? Do the Democrats honestly believe that the overwhelming majority of Americans want someone with his limited experience and radical ideas to be president? Not to mention that the idea of a “First Fellow” induces nausea in the majority of us.

Elizabeth Warren? She can’t even win in the Northeast.

Sleepy Joe Biden? Even if he and his kid are not frog marched to prison soon, his political Career is over with. And, from what Americans have witnessed on the campaign trail, so are his cognitive functions.

Mini Mike Bloomberg? Do the Democrats actually believe that average Americans are going to vote for the guy who wants to grab our guns so bad that he had children march out of schools in protest over it? And, even if they don’t know that…they know him as the idiot who banned the Big Gulp. ‘Nuff said.

I believe, like Sen. Graham does, that things are just going to get worse for the Democrats as the 2020 President Election draws near.

Although, it should be awfully entertaining. 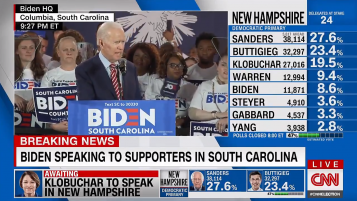