As I write this, the Conservative world is reeling with the news that Rush Limbaugh has announced having advanced lung cancer. This comes on the heels of John Andretti dying of colon cancer last week and Gerri Willis of Fox Business News announcing that she has developed cervical cancer after successfully fighting off breast cancer.

The immediate thought of people upon hearing that Rush has cancer is that it is a death sentence, often coming very soon. But that is not necessarily true. Not knowing where the cancer has spread to, I cannot address what will happen next, but it is a good idea to at least say a bit about what he is going through right now.

Lung cancer becomes advanced when it spreads to the other lung or other parts of your body. That is called metastatic or stage IV disease.

Lung cancer is difficult to diagnose in its early stages. Symptoms may present themselves like a cough or feeling tired, but it is not concerning enough to see a doctor. It is usually found only after becoming Stage 4.

There is no cure for Stage 4 lung cancer. Treatment is all about prolonging life and keeping quality of life.

With Stage 4 cancer, surgery will not “cure” the patient because the cancer has spread elsewhere. Instead, it will be treated with a mix of radiation, chemotherapy, and targeted therapies — drugs that attack specific parts of the cancer cells.

The emotional roller coaster ride that a person who has cancer goes through cannot be truly understood unless you have experienced it. Fear, anger, and sadness is typical of the patient.

Cancer makes a person feel tired all of the time. Treatments worsen the tiredness. Pain is often a common syndrome of cancer, especially if it has invaded the bones.

The good news is that there are new treatments becoming available every year to extend the life of the cancer patient. The treatments are designed to turn cancer into a “chronic” disease and to at least control the growth of the disease.

Rush has the money that he can seek the best care available. I am optimistic that he will be around for a long time.

I can write about Rush with a pretty good idea of what he is going through. As many of you here know, I have Stage 4 Prostate Cancer (PC).

My diagnosis was on November 22, 2016 and like Rush was Stage 4 at diagnosis. My cancer had spread to spots on the ilium, sacrum, femur, clavical and L5 invertebrate bones. Treatment was immediately started using Lupron which stops testosterone production, the “food source” for PC.

Since then, I have been put on Zometa (to help protect against bone degradation), Casodex when the Lupron began to lose effectiveness, and most recently on November 6, 2019, Xtandi for when the Casodex lost effectiveness.

At some point, the Xtandi will begin to lose effectiveness and we will switch to another drug to keep the PC under control.

I have also had surgery to remove a tumor on the bladder as well as to have the Prostate Gland “hollowed out” removing most of the cancer there. As of now, primary concerns are with the bone mets. Hopefully the Xtandi will reduce the size of them.

It has been a roller coaster ride of emotions for me. For the first year, I thought I was handling it well, but one need only to read comments I made in response to things others had wrote, or to witness how many times I “quit” the site to know that I had hidden anger to deal with. (I apologize to all for the drama I presented back then.) Hopefully, I have a better grip on the anger now.

Every month I experience anxiety when getting a blood test to see how my PSA score (the standard to see how meds are working) is trending, going up or down. When I see it dropping or staying stable, it is “winning again.” If it begins rising, then I know it is time to change to another drug protocol.

At this time, the docs tell me I should have many good years of life left on this worn out body. My job is to take of my general health and they will keep the PC at bay.

Rush will be going through my array of feelings, but so much more. His treatments will necessarily be much more aggressive because lung cancer is far worse than PC. (PC is generally slow growing while lung cancer is fast.) Depending upon his treatments, he will be constantly fatigued, emotionally spent, and often physically ill. But that is better than a “dirt” nap.

I wish him the best in this new journey he has undertaken. Unfortunately, but fortunately in many ways, he has millions of fellow travelers to provide support and prayers for his well being.

Good luck Rush!  We are all with you here at SpartaReport. May your journey be as good as mine has been so far. 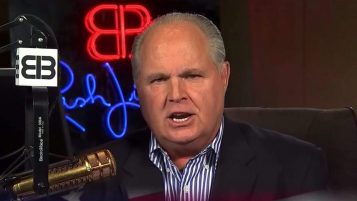