I'm introducing a resolution in support of the protestors in Iran. The world is watching, and the people of Iran need to know that they are not alone in this pivotal moment.

Not to the House Democrats.

House Democrats on Tuesday blocked a vote on a resolution introduced by House Minority Leader Kevin McCarthy, California Republican, that expressed support of anti-government protesters in Iran and condemned Iran’s role in the downing of a Ukrainian civilian aircraft last week.

While details behind the blockage remain unclear, Democrats were reportedly drafting their own version of the resolution to compete with Mr. McCarthy’s resolution.

“What a disappointment — Democrats just blocked a vote on a resolution supporting the Iranian protesters,” the GOP leader tweeted.

“This is not the time for partisan politics. This should be a time for the U.S. Congress to speak with one voice to condemn an Iranian regime that kills its own people.”

As tensions between the U.S. and Iran came to a head amid a U.S. fatal strike on top Iranian general last week and Tehran’s response with an attack on two American bases in Iraq, Republicans and Democrats have been sparring over the administration’s justification for military action.

How much do you want to bet the the House Democrats will draft a resolution condemning President Trump for the missile strike against the murderous Iranian General Quassem Soleimani, instead? If you think that sounds farfetched, then you haven’t been paying attention.

Tomorrow, the House Democrats are going to pass a resolution aiming at limiting the power of President Trump, ouor Commander-in Chief, to defend us from our enemies.

it is in response to his taking out Soleimani.

The only problem is, they have no Constitutional authority to do what is in the Resolution.

It is just a bunch of B.S. from the Party of the Wokesheviks.

For a while now, I have been calling the young mindless minions of the Far Left Democratic Party, the “New Bolsheviks, because of their uncanny resemblance to the Bolsheviks, who were the “useful idiots” who overthrew the Czar and placed the Marxist Vladimir Lenin in Power during the Russian Revolution over 100 years ago.

However, that label just does not quite fit the times, so, from now on, I will be referring to them as the “Wokeheviks”.

For years now, I have referred to the intolerant political ideology of Modern American Liberals as “The New Fascism” because of their intolerance toward traditional Americans Faith and Values, including our relationship with our closest ally, since their birth as a country in 1948.

What we are seeing now, as regards the Far Left Democratic Party and its radical movement to the Left of the Political Spectrum, which includes anti-Semitism and which began under Former President Barack Hussein Obama, is a result of an amalgamation of the political philosophies of the special interest groups who have replaced average Americans as the Democrats’ Voting Base.

Anti-Semitism is the norm in Marxism in all of its forms, fascism, and, of course, Islam.

All of these political philosophies are the anti-thesis of whom the Far Left Democrats claim to be.

Ladies and gentlemen, I firmly believe that America is in the middle of fighting a new war against fascism.

It’s not a war that is being fought with guns and bullets, But instead, it is being fought with  an all-out Political War, attacking average Americans and the President whom we elected through the use of a baseless Impeachment, anonymous sources, unproven baseless accusations, and the Vanguard of the Modern Democratic Party, the Main Stream Media.

A form of government unique to America, a Constitutional Republic, which the clueless Alexandria Ocasio-Cortez, in a deflective move, identified as “fascistic”.

By now, there’s some out there in the audience saying, “Oh Lord, the crazy old cracker’s overreacting again.”

If you try to talk to a Liberal about this New Fascism, they will deny that there is any fascism going on at all. In fact, they will tell you that their radicalism “the will of the people” and they will site Democratically stacked push polls in order to back their opinion up.

Liberals can not legitimately defend their positions, such as the suppression of the Second Amendment Rights of average Americans, the Silent Coup began by those members of the DOJ and FBI during the Obama Administration against now-President Trump, the “Caining” of Judge Kavanaugh, and now, the taking over of the Democratic Party by a bunch of wild-eyed anti-American radicals resulting in the Impeachment of a President for political expediency.

All of this political unethical behavior by the Far Left Democrats is reminiscent of both the Russian Revolution and Hitler and his Brown Shirts’ “Beer Hall Putsch” which probably should have been expected, given the “Wokesheviks” track record of Liberal Intolerance and aversion to opposing viewpoints.

And now, the unashamed defense of an Iranian murderer and the world’s leading State Sponsor of Radical Islamic Terrorism. 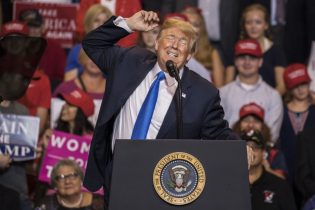