In September 2019 President Trump signed an executive order requiring that both the State and local governments consent to receive refugees under the Department of State’s Reception and Placement Program (Program). What is necessary to provide consent? A letter must be written which is then posted here.

I see nothing but good here since the Program provides taxpayer money for refugee resettlement and it would be good to know that there is a direct line between this money and the refugee along with adding transparency that the communities receiving the refugees actually want them.

Here in Twin Falls, Idaho the Program has been active for some thirty years and is administered through the College of Southern Idaho. During this period some 2,500 refugees have been resettled in the area. The Program has cost U.S. taxpayers (or has brought into the community — depending on your point of view) about $3M.

Since I’m a numbers guy, that would be about 90 per year at a cost of $1,200 per refugee. Of course, this isn’t the total cost because refugees are eligible for all services such as Food Stamps and Medicaid as any other citizen. It’s these expenses that really add up. According to an article in the Washington Examiner —

The Federation for American Immigration Reform Monday put the five-year price tag at $8.8 billion in federal and state costs, or nearly $80,000 per refugee. There are some 18 federal and state programs refugees can tap for financial help, including food stamps, child care, public housing and school loans.

On a yearly average, it is $1.8 billion, or $15,900 per refugee. Included in that are enormous refugee resettlement costs such as $867 million in welfare, housing assistance and education.

Actually, this shouldn’t be a surprise at all since these people come with absolutely nothing and in many instances without the ability to function in the community without significant training. On the other hand, at some point these refugees do become functioning members of the community and no doubt pay back this investment in taxes along with just being, hopefully, a good citizen.

As to the question of “how many refugees should the United States admit?,” I’m going to default to saying that we have laws that define this and an annual cap is set by the president. The cap for 2020 is 18,000. Here’s the chart for how how this cap has varied over time. 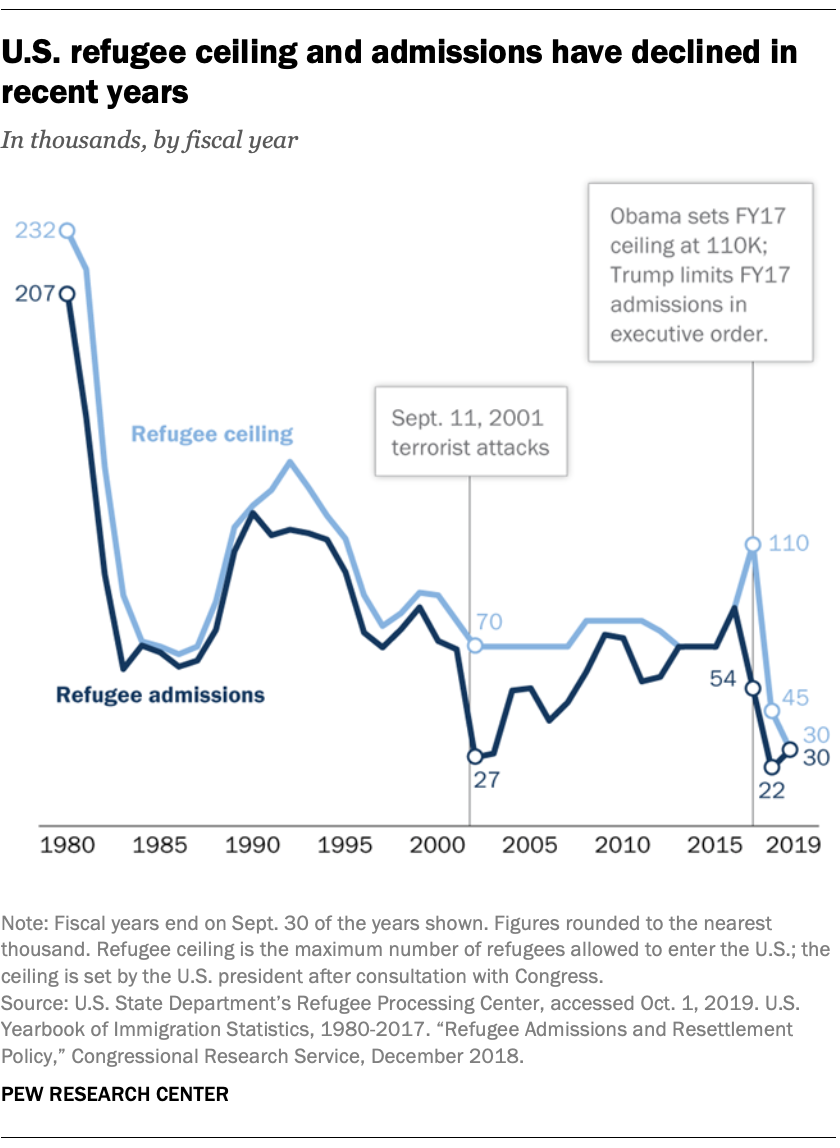 I think it’s fair to say that the President isn’t a big fan of admitting refugees except through “merit.” At the risk of being accused of virtue signaling too much, I think we need a more balanced approach because sometimes it’s better to go along to get along. The reality is that there are something like 65 million refugees worldwide and whether it’s 18,000 or 180,000, it’s a drop in the bucket to the actual size of the problem. Done properly, refugees have a better chance of being good citizens than the 12 million illegals in our midst because we actively attempt to bring them into our society.

Here’s a really good video from the Refugee Center here in Twin Falls. It’s worth viewing so you can speak intelligently on what it actually means to be a refugee and all the effort that goes into helping them assimilate.

“Merit” should be addressed here as well. In Idaho, “merit” means the desire to work at low skill, low wage farming jobs which is why the CSI Refugee Center was created. There is a flip side, of course, which is that Twin Falls ranks 21st in Idaho for wages at $19,892 per capita. The average in the United States is $27,334 per capita. The degree to which refugees affect depressing the overall per capita income for the area I don’t know — although I suspect it’s very low given the numbers we’re talking about. However, when we talk about immigration of any kind, it’s always an area of concern since we want to have people filling the “American Dream” funnel at the top while still ensuring that current citizens are guaranteed their shot.

Here’s my take on this for what it’s worth. I think President Trump has picked the wrong battle with reducing the cap on refugees. In fact, I think he should have done the opposite and raised the cap to 100,000 as Obama had intended. The result would have been that the system would not have been able to handle the additional refugees and there would be a build-out of centers such as here in Twin Falls. Tying that with the executive order requiring local and state concurrence would have also provided a more thoughtful ramp up rather than everyone jumping on the “it’s free money — let’s go get it!” mentality most federal programs generate.