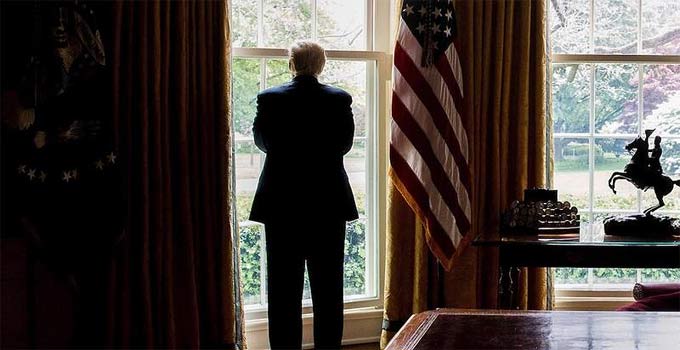 Last night, the 45th President of the United States of America, after another long day of being attacked by the sore losers of the Democratic Party, announced the following decision on Twitter.

1600 Pennsylvania Avenue, the White House, is the place I have come to love and will stay for, hopefully, another 5 years as we MAKE AMERICA GREAT AGAIN, but my family and I will be making Palm Beach, Florida, our Permanent Residence. I cherish New York, and the people of…..

….this decision, but in the end it will be best for all concerned. As President, I will always be there to help New York and the great people of New York. It will always have a special place in my heart!

The President is not the first wealthy person to leave the Liberal State of New York and Far Left Liberal New York City due to the high tax rate and the downright hatred of Conservatives.

The Godfather of Conservative Talk Radio, Rush Limbaugh, got the heck out of there years ago, he himself also moving to the Palm Beach, Florida Area, building a beautiful home and radio studio complex in West Palm Beach.

Ever since Trump announced that he was seeking to be the Republican Nominee as their  Presidential Candidate, the Liberal Hoi Polloi, the New York City Media, and the New Bolsheviks as well, began treating the man who had done so much for the city of New York, like people in the time of Christ treated Lepers.

Just as Americans are witnessing daily regarding the Soviet-Style secret meetings being held by Rep. Adam Schiff and the House Democrats in their desperation to find something, ANYTHING, that will give them cause to formally Impeach President Trump, so are Americans living in the Heartland struck dumbfounded by the mindless obsessive hatred and self-righteous arrogance being shown by the opposition party politicians and their fellow travelers toward this American President who has accomplished more in 3 years than any president since Ronald Reagan.

It’s one thing not to like losing, I know that I never have.

However, to wish doom, death, and personal destruction on a man who has put more money in your pocket and provided more job opportunities to your family, while making Americans safer, makes about as much sense as setting your hair on fire and putting it out with a hammer.

I guess Liberal Democrats became used to bullying a President when “Dubya” was in office.

Trump will not be bullied or cowed.

I, for one, do not blame the President for leaving the nest of vipers that has grown exponentially all the way from Albany to a city that has affectionately been known in the past as “The Big Apple”.

I mean, once worms burrow their way into an apple, it becomes too rotten to stomach, doesn’t it?