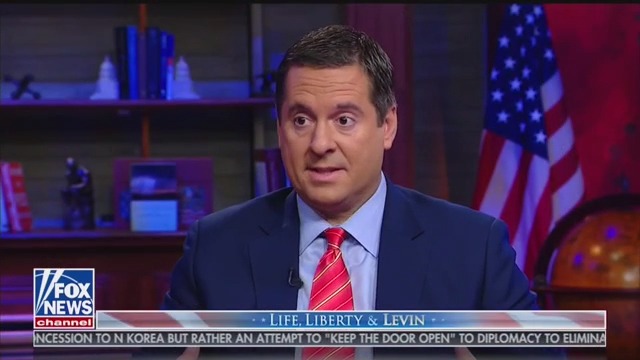 The Trump White House became involved in Ukrainian affairs to investigate a smear campaign from Democrats against the president, but the fact-finding mission was twisted and used as an excuse for impeachment, House Intelligence Committee Ranking Member Devin Nunes, R-Calif., said in an interview airing Sunday.

Nunes appeared on “Life, Liberty & Levin” to discuss the House’s impeachment inquiry into Trump, and said Democrats paid Fusion GPS to dig up dirt on the president through Ukrainian sources, helping spawn the probe from former Special Counsel Robert Mueller.

The California Republican also said it was perfectly reasonable for the president and his surrogates to go looking for answers after they faced attacked from all sides.

“What’s just amazing is, the Democrats continue to say, ‘oh, this is some kind of conspiracy theory’… The fact that Rudy Giuliani would be in Ukraine or talking to Ukrainians about, ‘hey, where’s this dirt that’s being dug up on my client?’ It would be a dereliction of Rudy Giuliani’s responsibilities as the personal attorney to the president [not to do so],” Nunes said.

Nunes also accused Democrats of targeting high-ranking Ukrainian officials to provide damaging information about the president so they could use it to force him out of office.

“You had so many problems in Ukraine,” Nunes said earlier in the segment. “The Democrats, they hate to admit this, but their sources for the Fusion GPS [dossier] — a company that they were paying to dig up the dirt on Trump that ultimately made its way into the FBI — there were Ukrainian sources there, so they were paying people to go into Ukraine and dig up dirt.”

“Some of this dirt came from high-ranking Ukrainian officials, allegedly,” he added. “Remember, we spent three years with this Mueller nonsense. [Giuliani] had every right and responsibility to be over there.”

Fusion GPS was the firm retained by Hillary Clinton and her Presidential Campaign Staff and the Democratic National Committee (DNC) to conduct opposition research against the Trump campaign.

Are you beginning to see a common denominator, boys and girls?

What is it about Ukraine and the Democrats?

Joe Biden is not the only Democrat whose son has “worked” in Ukraine.

House Speaker Nancy Pelosi’s son Paul Pelosi Jr. visited Ukraine in 2017 to meet with government officials in connection to a business initiative. Now, unearthed records reveal that Paul Pelosi Jr. was an executive of a gas industry company that did business in Ukraine – and his mother Nancy Pelosi was featured in one of the company’s promotional videos.

Paul Pelosi Jr. travelled to Kiev, Ukraine in July 2017 in his capacity as executive director of the Corporate Governance Initiative, a position that he accepted months earlier in February 2017. Pelosi Jr. said that he was in Ukraine to discuss a youth soccer partnership with the government.

The American Mirror, which flagged Pelosi Jr.’s appearance in 2017, preserved a clip of Pelosi Jr. on the Ukrainian station following the video’s removal from YouTube.

On March 5, 2013, NRGLab New Technology posted two videos on Youtube. One video opened with a clip of Nancy Pelosi discussing energy-efficient technology, followed by a direct-to-camera statement from her son Paul Pelosi Jr., filmed in Washington, D.C. in 2010.

“My name’s Paul Pelosi. Of course I’m on the board of Viscoil. And Viscoil is here today to talk about accelerating the future. It’s about using cars in a more efficient manner. It’s about utilizing natural resources, whether it be electricity, or gas, or fossil fuels in a more efficient way. And Viscoil is a part of that solution,” Paul Pelosi Jr. said in the video.

A friend and I were discussing this whole mess at lunch after church yesterday.

He reminded me that Inspector General Horowitz’s report on the start of the whole Russian Collusion Witch Hunt and the improper use of the FISA Court is supposed to come out at the end of this month.

Could it be that the Dems hastily put together this ludicrous Impeachment Inquiry with no evidence to back it up in order to attempt to cover their own backsides before they get named in the Inspector General’s Report as having been in on the whole Washington/Ukraine Connection from the beginning?

If so, that would indeed explain the irrational nature of Adam Schiff and his Soviet-style tribunal.

it’s time to drain The Swamp.