Yesterday, President Trump made history by signing the Hong Kong Human Rights and Democracy Act of 2019. The bill allows the United States to sanction individuals who commit`human rights violations in Hong Kong.

The build up certainly was dramatic: for days after Congress almost unanimously passed the Hong Kong Human Rights and Democracy Act last week, China repeatedly vowed it would take unspecified countermeasures if Trump signed the bill, fueling concerns that President Xi Jinping would scuttle the trade talks to appear tough on the U.S. In the end, China did nothing: Wednesday’s bill signing by Mr. Trump came and went without any real action.

Instead, as the WSJ notes, “Chinese officials shifted their focus to whether the U.S. president would implement any of the bill’s measures, according to officials involved in economic policy-making.” Specifically, to save face, Beijing seized on a sentence in Trump’s statement that emphasized his “constitutional authorities with respect to foreign relations.”

Or as the WSJ summarized, for all its huffing and puffing, “China’s leadership still wants a deal to help alleviate pressure on its fast-weakening economy”, which incidentally coincides with Trump’s own interest as he hopes to clinch a deal to boost his re-election bid.

In other words, President Trump’s backing of Hong Kong’s pro-democracy protesters will likely have little to no impact on current US-China trade negotiations:

“It does spoil the mood, but it shouldn’t interfere with the trade talks,” said Wang Yong, a professor of international relations at Peking University, of Mr. Trump’s move. “Both sides have enough reasons to keep trade, Hong Kong and political issues on separate tracks.”

Hong Kong’s protesters were ecstatic, and held a Thanksgiving rally outside Edinburgh Palace thanking President Trump for his support.

People are waving the national flag and singing the national anthem of the US at the #Thanksgiving assembly as part of #HongKongProtests. #POTUS signed the Hong Kong Human Rights & Democracy Act into law this morning HK time pic.twitter.com/zVnx1G5Ued

The night after the Hong Kong Human Rights and Democracy Act is passed, #Hongkong people gathered and celebrated this bitter victory amid the prolonged movement. The bill is a thanksgiving present for HongKong—it encourages us to keep fighting for democracy.#DemocracyNow pic.twitter.com/8E88qewXy2

A sea of US flags is being waved at Edinburgh Place, as activists involved in speaking in Washington — including Denise Ho, Joshua Wong and Sunny Cheung — are set to speak.#hongkong pic.twitter.com/9nOPn9Sll9

America’s Democrats are working harder than ever before to destroy everything President Trump has ever worked for.

Citizens of a foreign nation struggling for the right of self-determination wish Trump was their president.

Let that sink in. 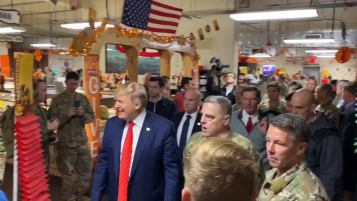