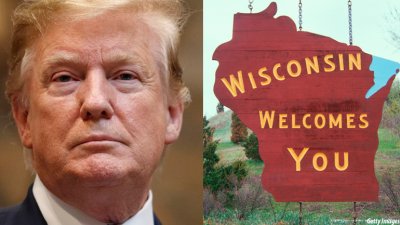 One of the biggest surprises of Election Night 2016 was the blue to red flip of Wisconsin – a Midwestern battleground state that has trended Democrat in most recent presidential elections.

And for a growing number of Democrat strategists gaming out Election 2020 the political shape-shift of the Badger State looks even more frightening.

A recent post on Bloomberg entitled Democrats face their fears in Wisconsin examines the growing volume of flop-sweat within the Donk brain-trust as they attempt to beat back the Red Tide that moved Cheeseland into the Trump column:

Wisconsin is not a Democratic bastion, despite presidential victories that stretched from 1988 until 2016. Obama’s solid wins in 2008 and 2012 were solid exceptions (and solid evidence of what an exceptional politician he was). Obama’s comfortable margins in the state obscured other, perhaps more relevant, data points. In 2004, John Kerry defeated George W. Bush in Wisconsin by little more than 11,000 votes – less than four-tenths of 1%. Al Gore won the state over Bush in 2000 by fewer than 6,000 votes.

Between its warm embraces of Obama, Wisconsin elected Scott Walker, an aggressive Republican partisan, as governor in 2010, again in 2012 in a recall election and once more in 2014. After going for Trump in 2016, the state voted for liberal Democrat Tammy Baldwin, the nation’s first openly gay U.S. senator, in a landslide in 2018, and also elected Democrat Tony Evers for governor over Walker by a very slim margin. Wisconsin is home to Obama-Walker-Trump-Baldwin voters, political shape-shifters who seem to defy reason as well as partisanship.

After the 2016 debacle, Vinehout and Kane zeroed in on another species of voter who contributed to the surprise: rural white men who were not regular voters. “I called up the clerks. I called up the poll workers. I wanted to know what happened,” recalled Vinehout in a telephone interview. What the clerks and poll workers told her was that a number of Wisconsinites who voted in 2016 were new faces. In rural counties like Buffalo, Vinehout said, “ward-level data shows that a lot of people came to the polls for the first time.”

Wisconsin is not certain to be the pivotal state in the 2020 election. American politics retains ample capacity to surprise. But it’s the state most likely to put one candidate or another over the 270 threshold in the Electoral College.

Think about it: the fate of the republic rests on the shoulders of people who wear chunks of Styrofoam cheese on their heads.