Carpe Donktum has an article in Mediaite titled Pro-Trump Memesmith Asks ‘Who Owns Our Symbols, the Masses or the Madmen?’

Carpe laments how political discourse ignores the data and focuses on trying to turn images into something they were never intended to mean. In this instance, a lion as a #MAGA symbol.

Someone needs to slap Carpe with an oily freshwater fish from the family Cyprinidae. I mean, really, Carpe! The reason that memes and symbols are so powerful is that they convey meaning in virtually no time. As they say, a picture is worth a thousand words and so it’s the picture that will always be the focus of derision or approval.

What makes memes different is that they’re also a form of humor. The greatest memesmith of my lifetime was Johnny Carson. The meme is the power of the unsaid. Carson was the master.

The jokes from Carnac aren’t all that funny in themselves; it’s Johnny Carson’s unsaid reaction that’s funny. Carnac is a comedic meme.

My all time favorite meme is by Mad Liberals. There literally isn’t a single world spoken

Scott Adams has pointed out that 1/3 of the people simply do not have a sense of humor. Assuming you’re not one of them, Trump as a victorious Peshwa warrior is just plain funny. It’s funny because it hits at what we believe about ourselves and President Trump. It’s funny because if Donald Trump was really a Peshwa warrior, this is what a Make Peshwa Great Again rally would look like.

And not a single word was spoken. We just get it. And that’s why it’s effective. in 47 seconds, Mad Liberals sums up how we see Donald Trump fighting with us and how we are by his side. That’s really powerful stuff.

What this meme doesn’t have is universal appeal and while it’s funny, it’s only really funny to us. Everyone else either doesn’t get it or just goes meh.

And then there’s this image which has stirred up all the fuss: 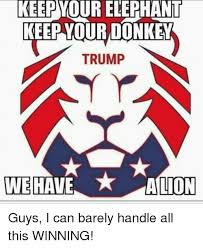 We immediately get it and everyone else gets it as well. That makes it really dangerous since it’s MAGA on steroids. And that’s why it needs to be destroyed by the left AND the GOPe! When we see it, it immediately invokes a bit of a smirk and an unsaid “Fuckin’-A Bubba!” And if you think that the GOP and the Democrats are both as useless as a concrete parachute, maybe being associated with a lion is worth looking at.

This meme is so powerful and so relatable, that it will become the Trump campaign’s logo — whether they want it to or not unless, as Carpe says —

It must be destroyed, the earth salted, and everything within a 10-mile radius paved over and surrounded by caution tape.

It would have been funnier if he had said “crime scene tape.”