The Bahamas has been impacted particularly heavily by category 5 Hurricane Dorian:

As the storm’s eye passed over the island, Bahamian Prime Minister Hubert Minnis announced that parts of Marsh Harbour, a town of more than 6,000, appeared to be “underwater,” and reports surfaced of desperate residents in roofless homes trying to seek shelter from rising floodwaters.

The storm “is one that we have never seen in the history of the Bahamas,” Minnis said, adding that the government had no confirmation of fatalities.

Addressing people on the island, he said: “I can only say to them that I hope this is not the last time they will hear my voice, and may God be with them.”

Dorian’s eyewall was on course to hit island communities farther west, even as the storm was slouching forward at a painfully slow 7 mph. The speed could reduce further, experts warned.

Maxine Duncombe, administrator of Central Abaco, said more than 500 people lived on cays off the district and most had remained despite evacuation orders.

“I would say at least 90 percent of the persons stayed on the cays,” she said. “They did not avail themselves of the transportation that was provided for them to be evacuated.” 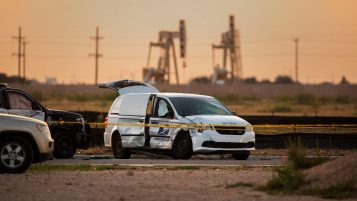