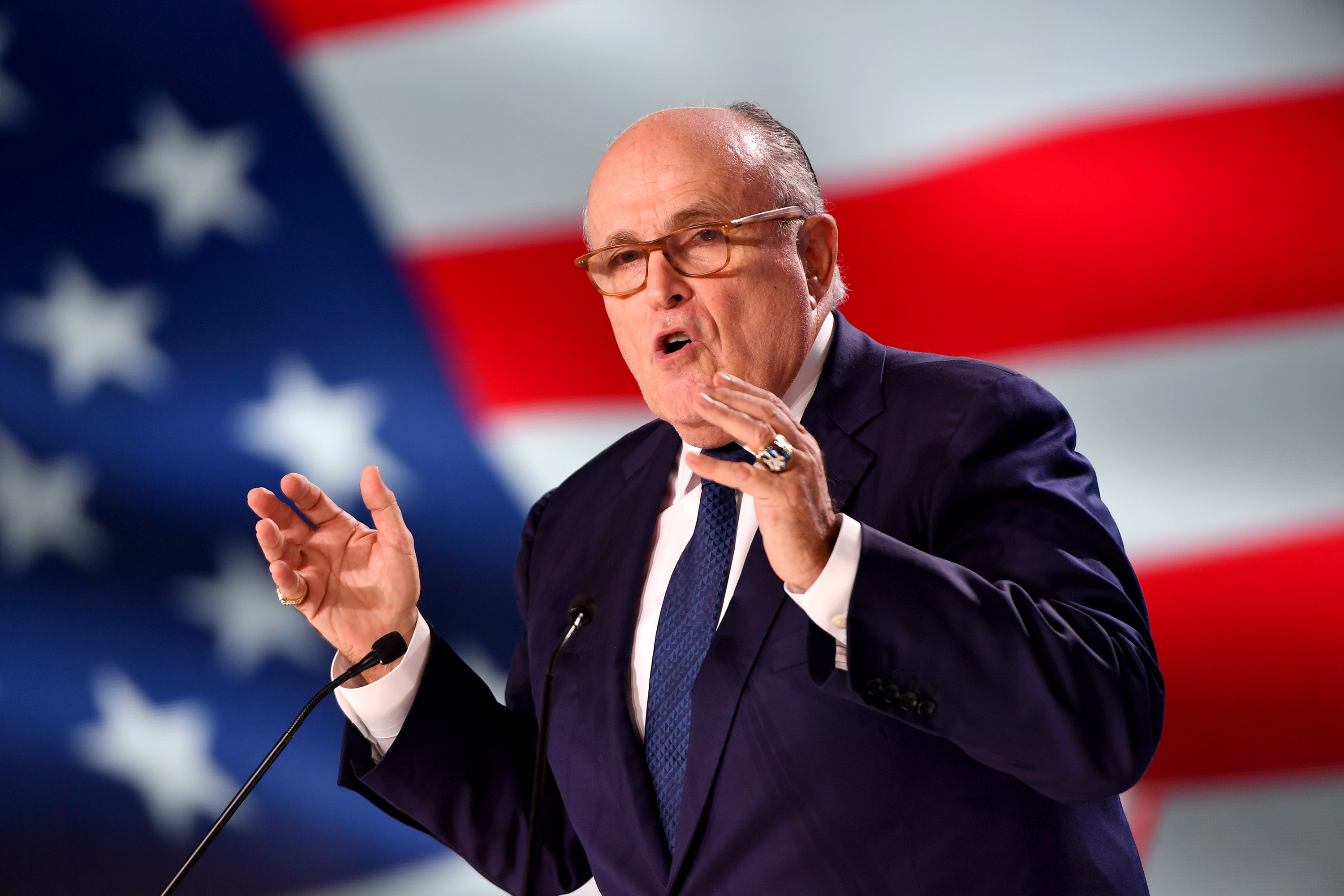 These Radical Left, Do Nothing Democrats, are doing great harm to our Country. They are lying & cheating like never before in our Country’s history in order to destabilize the United States of America & it’s upcoming 2020 Election. They & the Fake News Media are Dangerous & Bad!

The Biden campaign wrote to NBC News, CBS News, Fox News and CNN to voice “grave concern that you continue to book Rudy Giuliani on your air to spread false, debunked conspiracy theories on behalf of Donald Trump,” according to The Daily Beast, which first reported the existence of the letter.

The memo, drafted by Biden aides Kate Bedingfield and Anita Dunn, continued: “While you often fact check his statements in real time during your discussions, that is no longer enough. By giving him your air time, you are allowing him to introduce increasingly unhinged, unfounded and desperate lies into the national conversation.”

Should a network choose to book Giuliani, the Biden campaign called for “an equivalent amount of time” to be provided “to a surrogate for the Biden campaign.” The letter noted Giuliani was not a public official, but Trump’s lawyer and personal advisor.

Responding to the request, Trump 2020 campaign manager Brad Parscale tweeted: “Can we request the removal of Democrats on TV that push hoaxes? Wait, but then who would do the interviews?”

Hours earlier, Giuliani made the rounds on several Sunday shows, including “Fox News Sunday,” to argue that evidence of Biden’s possible corruption has been hiding in plain sight for months.

Biden has acknowledged on camera that, when he was vice president, he successfully pressured Ukraine to fire that prosecutor, Viktor Shokin, who was investigating the natural gas firm Burisma Holdings — where son Hunter Biden had a highly lucrative role on the board paying him tens of thousands of dollars per month, despite limited relevant expertise. The vice president threatened to withhold $1 billion in critical U.S. aid if Shokin was not fired.

“Well, son of a b—h, he got fired,” Biden joked at a panel two years after leaving office.

Shokin himself had been widely accused of corruption, while critics charged that Hunter Biden essentially might have been selling access to his father, who had pushed Ukraine to increase its natural gas production. Giuliani, on Sunday, suggested Shokin was the target of an international smear campaign to discredit his work.

In a combative interview on ABC News’ “This Week” on Sunday, Giuliani presented what he said was an affidavit signed by Shokin that confirmed Hunter Biden was being investigated when Shokin was fired.

“I have an affidavit here that’s been online for six months that nobody bothered to read from the gentleman who was fired, Viktor Shokin, the so-called corrupt prosecutor,” Giuliani said. “The Biden people say that he wasn’t investigating Hunter Biden at the time. He says under oath that he was.” The Shokin affidavit purportedly said the U.S. had pressured him into resigning because he was unwilling to drop the case.

After anchor George Stephanopoulos expressed skepticism, Giuliani fired back: “How about if I — how about if I tell you over the next week four more of these will come out from four other prosecutors? … No, no, no, George, they won’t be [investigated], because they’ve been online for six months, and the Washington press will not accept the fact that Joe Biden might have done something like this.”

When Stephanopoulos called it “not true” that Hunter Biden had taken more than $1 billion from China while the U.S. was negotiating with the country, Giuliani again said the former Clinton administration official was being too dismissive.

Giuliani went on: “Can I — can I make a contrast? Can I just make a slight contrast with the so-called whistleblower? The whistleblower says I don’t have any direct knowledge, I just heard things. Up until two weeks before he did that, that wouldn’t even [have] been a complaint, would have been dismissed.”

But, that admonition was removed sometime afterward — around the time that an unnamed whistleblower filed a complaint, based on secondhand information, alleging misconduct in the White House. Although there has been no strict legal requirement for whistleblower complaints to contain only firsthand information, the previous intelligence community form made it clear that such secondhand complaints would not be investigated as a matter of procedure.

Almost as if this latest Witch Hunt was planned way in advance.

Sitting back and watching this attempted undoing of the results of the 2016 Presidential Election, something struck me as I sat down to write this post.

It has been the widely shared opinion of average Americans living here in the Heartland and Professional Political Pundits as well, that AOC and the rest of “The Squad” are now running the Democratic Party.

I believe as well that they and their fellow SJWs/Democratic Socialists are indeed running the show.

The actions and reactions of these Far Left Democrats, including Sleepy Joe, remind me of those who were in control of the old Soviet Union for all those decades, known as the Politboro.

When they came to power after the Russian Revolution, the first thing they did was to gather up the Proletariat’s guns. The next thing that they did was to begin to censor free speech and any opposition voices who might speak out against their true nature of corruption and tyranny.

Then, the National Media itself became a government entity, i.e., a means of spreading PROPAGANDA, treating the Russian citizens like mushrooms, keeping them in the dark and feeding them BS.

Pretty soon, schoolchildren were rigidly tested and told which job they were going to have when they grew up.

And, as creativity became a rare thing, the Russian Economy began to collapse to the point where, as the late Robin Williams showed in “Moscow on the Hudson”, citizens could not even get a decent roll of toilet paper.

Being programmed from the time they could speak, the citizens of the Soviet Union grew to view the Central Government as mother, father, and god.

No dissension was allowed or else you were sent to the Siberian Gulags or you “disappeared”, as in “from this life”.

Are you following me, boys and girls?

Do you see what is happening to our Sovereign Nation?

What the Far Left Democrats are attempting is as un-American as you can get.

Trying to remove President Trump from office because he won the 2016 Presidential Election simply because they do not like him, by using employees of our own Federal Government known as the “Deep State” and now, attempting to cover up the crimes of Sleepy Joe and Hunter Biden by censoring Rudy Giuliani, one of the heroes of 9/11, is insane.

My late parents, along with others of the Greatest Generation, are rolling over in their graves, as they witness the Sacred Land which they loved so much being taken on a similar destructive journey by followers of the same kind of fascist ideology for which they died and lived sacrificially for in order to keep America safe from.

The Democrats should be ashamed of themselves.

“Useful idiots” are never aware that they are being used.